A black Lab Pitbull mix is becoming quite popular, as both parent breeds are well loved. But, how suitable is it as a family pet? Before we tackle that, let’s take a look at the history of the black Lab and Pitbull mix. 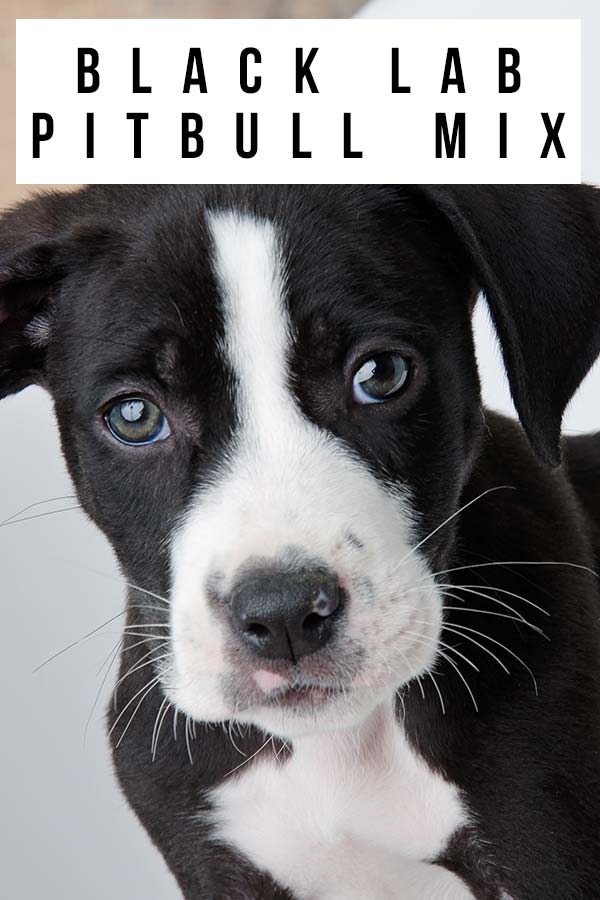 Labrador ancestors originally worked alongside fishermen in Newfoundland, Canada. Black Labs are the most common color. In fact, until the 1990s, other shades of Labrador were not desirable at all.

Pitbull breeds have a sad history being used in blood sports like bull baiting, ratting, and dog fighting. Luckily, these sports were banned in the past. Pitbull breeds have been lovable, affectionate companions to people and families for many generations now.

Is the Black Coat Color Guaranteed?

If you’re looking to get a black Lab Pitbull mix, you may be hoping that your puppy will have the coat color of its black Lab parent. The black coat color in Labs comes from the pigment eumelanin. Labs with more pigment have black coats, and those with less have chocolate coats. Black is the dominant color in Labradors, which is why black Labs are more common than other shades.

Labradors come in three main colors. But, pitbull breeds can have a lot more variation. There is a chance that a black Lab Pitbull mix puppy will not have a black or a fully black coat. It will depend entirely on the genes it inherits from its two parents. The best chance you have at getting a black puppy is to find a breeder who is mixing a black Lab with a black Pitbull. But, remember, ultimately a puppy’s health is more important than their coat color.

What Other Colors Do They Come In?

A mixed breed puppy can inherit any blend of traits from its two parent breeds. So, a Labrador Pitbull mix puppy could really be any shade that you will find in the parent breeds.

Labradors come in the standard black, yellow, and chocolate. But, it’s also possible to get Labs with diluted coat colors – charcoal, champagne, and silver. You can even find black Labs with white markings. Pitbulls come in a huge range of shades. We’ve included some of them in a list below:

So, really, Lab Pitbull mix puppies can be quite varied from one another.

We mentioned earlier that mixed breed puppies can inherit any blend of traits from their parent breeds. This extends to their temperaments!

Labradors are known for being friendly, affectionate, and social dogs. Their temperament differs slightly based on the type of Labrador you choose – English or American. American Labs are generally more high energy, excitable, and headstrong. But, English Labs are often more laid back and less excitable. Again, temperament will vary a little depending on which pitbull breed you use. But as a general idea, most pitbull breeds are affectionate, intelligent, and known for being great with kids. Pit breeds are also very energetic, as are Labradors. So, a mix between the two will need plenty of exercise.

It’s important that a black Lab and Pitbull mix is socialized well as a puppy. Particularly to other people and animals. Puppies who are properly socialized are less likely to act aggressively or fearfully as adult dogs. Before puppies are 12 weeks old they should be introduced to as many new experiences, things, and people as possible.

If you have young children at home or other pets, make sure to socialize your puppy well with children and other animals. Particularly other dogs. Many pitbull breeds were bred to be aggressive to other dogs and animals when they were first used as fighting animals. A well socialized black Lab Pitbull mix will be friendly, confident, and outgoing in all situations.

Just like temperament, appearance can vary between individual black Lab Pitbull mix puppies. We’ve already seen that color can be unpredictable. But, the same is true of the rest of their appearance! Some puppies will be more like their Lab parent. Whilst others are more like the pitbull breed used.

Labradors are medium sized dogs that have well proportioned bodies and faces. There are some slight differences between the American and English Lab, but you can read about these more in this guide. The appearance traits from the pitbull parent will depend entirely on the type of pitbull breed you use.

Labs are generally quite healthy. But, here are some problems that owners should watch out for.

As we already know, there are 5 different pitbull breeds that you can use to create a black Lab pitbull mix. Their health issues vary slightly. So, you should take a closer look at the specific breed being used for more information. But here are some common health issues to pitbull breeds.

Many of these health problems can be tested for in the parent breeds. So, the best breeders will be able to show you clean health certificates. If a breeder hasn’t health tested the parent dogs, or refuses to show you the results, you should find another breeder. Choosing a responsible black Lab Pitbull mix breeder will ensure that you have the healthiest pup possible. It will increase your chances of avoiding these problems when your dog is older.

If you’re looking to get a black Pitbull mix puppy, you should search for a reputable breeder. Don’t buy puppies from puppy farms or pet stores. These dogs are often poorly treated and less healthy.

You may want to decide what pitbull breed you are hoping for before starting your search, to help narrow things down. Or, you could choose to bring home a rescue dog. You may find a black Lab Pitbull mix in general dog rescues, or in breed specific rescues for the parent breeds. Rescue dogs usually have basic training, so can be a better option for some people. Staff will be able to inform you about a dog’s temperament and any known aggression or health issues, too.

Mixed breed dogs are getting more popular, so it is slowly becoming easier to find the mix you are looking for – both in rescue centers and through specific breeders. Just make sure the people you are getting your dog from have the puppy’s best interests at heart. Some poor breeders jump on trends to make a profit, and these people rarely care about the health of the dog. Choosing a healthy puppy is always the priority.

Do you have a black Labrador and Pitbull mix at home? We would love to hear what traits they’ve inherited from their parents! Where did you find your pup? Let us know the best things about this mix in the comments.