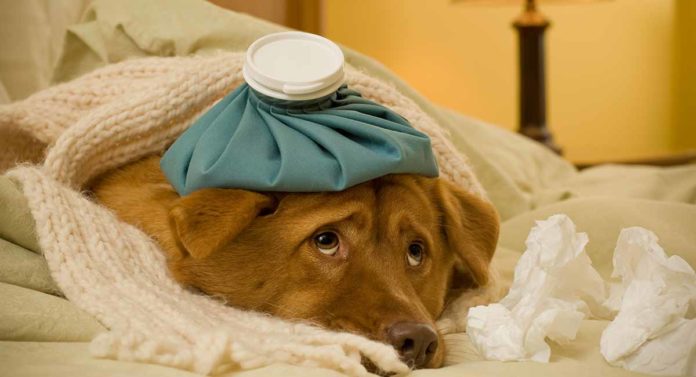 Can dogs get chicken pox from their owners, or do they manage to avoid the itchy rash?

Chicken pox is an extremely uncomfortable illness that most of us will experience at some point in our lives.

It’s characterized by itchy red hives and blisters, which can burst and scab over.

Thankfully, you can only get chicken pox once in your life, and most of us get it at a very young age.

But what about animals? Can dogs get chicken pox?

And if so, are we contagious to them if we ourselves have chicken pox?

In humans, chicken pox is highly contagious and can be easily passed to other people through sneezing or coughing.

Thus, it’s logical to be concerned about passing the illness on to your pets. But is dog chicken pox a concern?

Can Dogs Get Chicken Pox?

In short, the answer is no, dogs cannot get chicken pox.

The illness only affects humans, so there is no concern about your dog getting chicken pox.

With that said, dogs can develop symptoms that appear remarkably similar to chicken pox. So although dogs cannot get chicken pox, it’s still important to be aware of any symptoms your dog might develop, and seek out veterinary help when necessary.

Can Dogs Get Chicken Pox From Humans?

Chicken pox is an airborne virus that affects humans. It is not considered an anthroponotic disease, which means it does not pass from humans to animals.

Thus, humans cannot pass chicken pox to dogs, or to any other animals.

It is highly contagious to other humans though, so children who have chicken pox are encouraged to stay home until the illness subsides.

Although there is no such thing as “dog chicken pox,” there are several different conditions that can give dogs symptoms that are similar to chicken pox.

This is part of what creates confusion and leads people to wonder can dogs get chicken pox? If you notice a chicken pox-like rash on dogs, there could be a number of different reasons.

You may notice red rashes, fluid-filled blisters or other signs that may look like chicken pox. If this is the case, seek veterinary attention as soon as possible.

There are a number of things that can cause these symptoms. The most concerning is canine herpes virus (CHV), which is discussed in detail below.

Other causes could include parasites, such as ticks and fleas, allergies or bacterial infections.

Because there are a variety of potential causes, it’s important to seek veterinary help if you notice symptoms.

Canine herpes virus, also known as “dog pox,” is perhaps the closest thing to chicken pox that occurs in dogs. But, it’s not a pox at all. It’s caused by the herpes virus, or CHV.

CHV is a sexually transmittable disease among dogs. It primarily affects pregnant dogs and their pups.

Pregnant dogs infected with CHV may show signs of blisters and inflammation in the vulva. Many may not show signs, however, which adds to the danger of this virus.

Unfortunately, CHV can be deadly for new puppies. Pups infected with CHV may refuse to nurse, often becoming weak and eventually passing away. Canine herpes virus is one of the leading causes of death in pups under three weeks old.

Adult dogs can also be infected with CHV, although the disease is rarely life-threatening for adults. The most common sign is a red rash on the belly, leading many to believe their dog may have chicken pox.

Can dogs get chicken pox from other dogs? Again, chicken pox itself does not affect dogs. However, dogs can pass canine herpes virus to each other, which often results in pox-like symptoms.

Because these pox-like symptoms can be caused by several different things, it’s important to seek veterinary help.

A licensed veterinarian will be able to review your pet’s symptoms and run some tests to determine the root cause of any symptoms.

To help your vet out, try to provide as much information as necessary. Mention any behavioral changes you’ve noticed, as well as physical symptoms.

The treatment options presented by your veterinarian will depend on what the root cause of the symptoms are.

If the cause is determined to be canine herpes virus, treatment options are limited. In adult dogs, the virus may not require treatment at all. In puppies, antiviral medication and supportive care will be recommended immediately.

If the symptoms are caused by an allergic reaction, symptoms may be managed by antihistamine medications, dietary changes, and special soaps and shampoos.

In the case of irritation caused by parasites, removing the parasitic invaders will help reverse the symptoms.

If the symptoms are determined to stem from a bacterial infection, topical antibacterials may be recommended.

As you can see, treatment options vary significantly depending on the root cause of your dog’s symptoms. To ensure your pet stays healthy and happy, it’s important to seek veterinary care immediately.

Chicken Pox and Dogs: Wrapping Up

Can dogs get chicken pox? No, but they can get “dog pox,” otherwise known as canine herpes virus.

What might cause a chicken-pox like rash in dogs? It could be CHV, a bacterial infection, allergies or another cause.

What should I do if my dog shows symptoms? You should seek veterinary help immediately. Because the symptoms could be caused by a number of different issues, it’s important to seek the help of a licensed veterinarian as soon as possible.

Joshua, J.O., 1975, “Dog Pox: Some Clinical Aspects of an Eruptive Condition of Certain Mucous Surfaces in Dogs,” The Veterinary Record 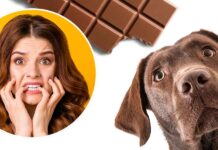 Dog Ate Chocolate – Symptoms, Toxicity, And What You Should Do

Labradoodle Lifespan – How Long Does This Popular Breed Live? 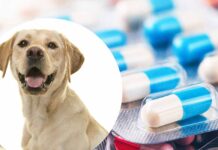 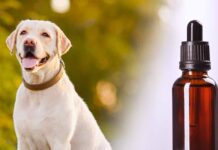 How To Stop A Dog’s Nail From Bleeding – Quickly & Safely 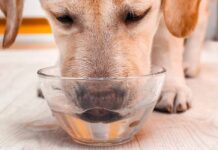 Be Your Dog's Best Teacher!

Dog Ate Chocolate – Symptoms, Toxicity, And What You Should Do

Field Labrador – The Hardest Working Labrador Retriever Of All

How To Keep Your Dog Off The Couch And Other Furniture