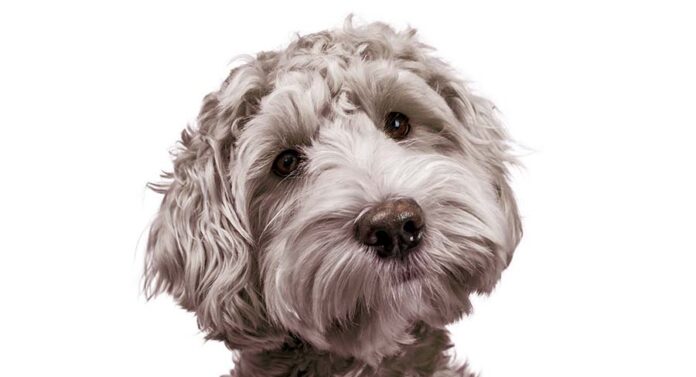 This complete guide to the silver Labradoodle has everything you need to know about the coat, health and temperament of a Labrador Poodle mix with shimmering grey fur.

The description silver Labradoodle can reasonably be applied to dogs in several genetically distinct colors. The exact type of silver Doodle dog you pick may even affect how trainable they are, and how often they get sick.

What is a Silver Labradoodle?

Silver Labradoodle is a surprisingly ambiguous term! It sounds like it could mean any light grey Labradoodle, right? And that is indeed how a lot of people use it. But there’s a bit of confusion about whether the name silver should really only apply to one specific Labradoodle coat color. And if so, which one!

Part of the problem is that silver Labrador Retrievers and silver Poodles are very specifically defined colors, but they are not the same color. A silver Labrador is a brown dog with a dilute coat. That is, they possess two copies of a recessive dilution gene, which suppresses pigment production in their fur. Since the dilution gene is recessive, a Labrador must inherit a copy from both of their parents for it to take effect. Silver Labradors are born silver colored.

The progressive greying gene is incompletely dominant, which means that Poodles only need to inherit one copy from one parent in order for it to take effect. But inheriting copies from both parents causes a dog’s coat to fade more dramatically. Different versions of the gene behave more and less powerfully as well, depending on their exact molecular structure. So there is a scale of possible color outcomes for fading Poodles, depending on how many copies of the greying gene they inherit, and how powerful each copy is. The bright platinum color described by the Poodle community as silver is the most extreme possibility. So it is likely that all silver Poodles have two copies of the greying gene (and powerful ones at that!).

Other shades of grey

On top of all this, there are other shades of grey in both breeds, which owners or observers without an interest in the finer details of color inheritance might also casually describe as silver. These include dilute black coats in Labradors (officially known as charcoal), and blue or grey coats in Poodles (which are the result of inheriting a single copy of the greying gene, or two ‘low power’ greying genes). You can also get brown Poodles with progressive greying genes, which are known as ‘silver beige’.

After all that, you won’t be surprised to hear that a lot of coat pigment combinations can end up being described as silver in the Labradoodle mix! Someone using the term silver Labradoodle could mean a black or brown coat that is either:

They are all legitimate combinations. But, some are limited to particular Labradoodle generations. For example, a first generation Labradoodle can only inherit, at most, one dilution gene (from their Lab parent) and/or one greying gene (from their Poodle parent). The single dilution gene won’t change their coat, but the single graying gene will. On the other hand, 2nd, 3rd, or multigen Labradoodles can express color dilution, progressive fading or even both, depending on their ancestry!

To tell them apart, remember that dogs with color dilution are born already dilute, and dogs with the progressive greying gene start densely pigmented, and fade as they mature. To distinguish between dilute or faded coats with either a black or brown base, you might also come across the terms silver blue Labradoodle (black-based dilution or fading) or a silver beige Labradoodle (brown-based dilution or fading).

Why is my chocolate Labradoodle turning silver?

That’s a lot of possibilities to take in, but hopefully you now feel equipped to answer a common Labradoodle owners’ conundrum: “why is my chocolate Labradoodle turning silver?!” When this happens, it’s because they have inherited the progressive greying gene from their Poodle parent. They were born densely pigmented, but now the greying gene is starting to take effect, and their coat is clearing. This process starts around 6 weeks old, and takes up to two years to complete.

Since the silver Labradoodle coat is inherited in several reliable ways, half of which are genetically dominant, it’s pretty straightforward for breeders to plan silver litters. The genetic balance of probabilities is not stacked against them! Whilst breeders should always prioritize achieving healthy, behaviorally sound puppies over puppies in particular colors, it’s still possible to do that and have a particular passion for pursuing silver coats. This means the availability of silver Labradoodle puppies is driven partly by trends, and demand.

Beware of breeders who tell you that a silver coat is rare, and use it to justify a silver Labradoodle cost. Reputable breeders don’t usually charge more for rare colors, because they know it makes dogs in those colors vulnerable to exploitation by puppy farmers and jeopardizes the overall welfare of the breed.

So there are several different ways that grey Labradoodle puppies for sale can end up being described as silver. But do any of them make a difference to their personality? Is one kind of silver Doodle any friendlier or more trainable than another?

At the time of writing, there is no known direct genetic link between coat color and temperament. But, an indirect link has developed in some Labrador breeding lines, which could also be reflected in their Labradoodle offspring. Among Labrador Retrievers, black Labs are traditionally much preferred for working gundog roles. As far as we know, black color and working aptitude are genetically independent of each other, but for many generations breeders have gone out of their way to select in favor of both together. In comparison, people didn’t generally want chocolate Labs for work, so there was less selection pressure on chocolate lines to produce individuals with innate working skills. Today, this means chocolate Labs are more likely to be described as agitated when ignored, excitable and scared of loud noise than black Labs, and less likely to be described as trainable.

These traits could be reflected in a silver beige Labradoodle from chocolate Labrador lines, compared to a silver blue Labradoodle from black Labrador lines. But, there are so many other influences at work (such as the individual temperament of both parents, the training they receive from an early age, the amount of physical exercise they get) that it would be nearly impossible to quantify exactly how much impact coming from brown Lab lines has had. What you can be sure of is that your Labradoodle will be smart, energetic, and people-focussed.

Next, what about health? Labs and Standard Poodles are remarkably similar in terms of overall health and life expectancy. They both live for around 12 years on average, and during their lifetime the most common health problems they have are:

Choosing a puppy from health tested parents is the best way to beat avoidable health problems like these. But yet again, the poor chocolate Lab is likely to compare unfavorably to their black and yellow cousins. Health studies of Labradors indicate that chocolate colored dogs are diagnosed with ear infections and dermatitis more frequently than black and yellow dogs, and live on average one year less. Chocolate Labs used to breed silver or silver beige Labradoodle puppies could pass these vulnerabilities on to their puppies.

So there you have it – one silver Doodle dog may not be strictly the same color as the next, and silver Doodles from chocolate Labrador parents may have a markedly different temperaments, health profile and lifespan too. If you’re looking for a grey Labradoodle for sale, make sure you choose a breeder who is candid about the pros and cons of this mix, and who has complete health certificates for both parents.

If you already have a silver Labradoodle, please tell us about them in the comments box down below! Were they silver when you picked them up, or did they fade as they matured?