Do dogs get bored? Yes, but there are things you can do to help them fight that feeling!

Dogs get bored and frustrated if they don’t get enough exercise, interaction, or opportunities to practice normal doggy behaviors.

Bored dogs may try to occupy themselves by performing destructive behaviors. Things like chewing, or abnormal compulsive or repetitive behaviors, like tail chasing.

Luckily, there are lots of ways owners can make their dog’s daily routine stimulating and mentally satisfying, so they don’t get bored.

Dog lovers worry about their pets getting bored for all kinds of reasons.

Because we have to leave them at home alone sometimes…

…or their meals look very repetitive compared with our own…

…or because they’ve been prescribed a strict period of limited exercise by their vet after surgery.

To name just a few!

If you’re worried about your dog feeling bored, it helps to look at the world as your dog sees it.

In this article we’ll do exactly that, and use what we see to answer questions like

And we’ll share our our eight favorite techniques for making sure boredom never bothers your dog!

Do Dogs Get Bored In The Same Way People Do?

Boredom has been defined as lack of stimulation, and as lack of opportunities for exercise and play.

Vets and canine behavior experts all agree that dogs can get bored.

But as humans, with our own ideas about what is boring, and what bored behavior looks like, it’s easy for us to misinterpret our dogs feelings. 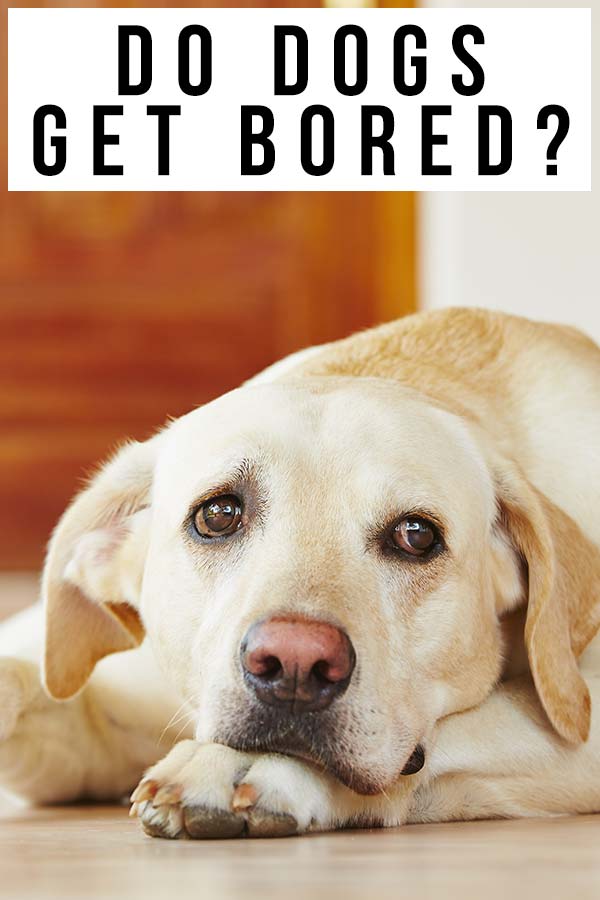 For example, researchers have found that dog owners often confuse boredom, frustration and separation anxiety with one another.

And historically, boredom and frustration have often been misdiagnosed as separation anxiety.

On the other hand we might not think our dog looks bored, when in fact that’s exactly how they’re feeling!

A dog who’s vigorously chewing up your furniture might appear naughty, but boredom could be the reason they went in search of an activity to occupy themselves with.

In a moment we’ll look at the signs that your dog is definitely bored, but first let’s look at some specific kinds of boredom.

Do Dogs Get Bored Of Their Food?

And frequently their food even looks perfectly homogenous.

As a person, it’s hard to imagine a mono-diet of identical kibbles at every meal for the rest of time, and not picture yourself losing interest.

Dog’s emotional connection with food is not as well studied as humans’. We know that human appetite is influenced by things like palatability and variety.

Some dog owners are convinced that their dogs get bored of eating the same meal for too long.

At the time of writing, we don’t know if they’re right, or if dogs’ residual wild instinct to eat what they can get, when they can, makes food boredom a non-issue.

Do Dogs Get Bored Of Their Toys?

Does your dog have a basket full of toys they don’t touch anymore?

Whether dogs get bored of their toys, and how much they value novelty is hard to gauge.

Lots of experienced dog owners certainly recommend keeping a puppy’s toy stash out of reach. Bbringing out a couple of different toys at a time in rotation, to keep them ‘fresh’ and appealing.

As far as we’re aware, there isn’t any scientific evidence to back this up or refute it, but we’d love to hear what you think in the comments box when you reach the bottom of this article!

Do Dogs Get Bored At Home?

Increasing numbers of pet parents need to juggle dog ownership with obligations outside the home.

For their dogs, that can mean regular periods at home alone. How do they feel about it?

There’s plenty of evidence that isolation and lack of access to social interactions can cause problems.

Things like distress, anxiety and boredom in dogs, which can manifest as destructive or abnormal behavior, or even physical symptoms such as changes in appetite.

Dogs are likely to find being alone boring and upsetting because the entire history of domestication was based upon creating dogs who wanted to be near us.

Removing ourselves again has rather pulled the rug from under their feet in this respect.

Do Dogs Get Bored Of The Same Walk?

So dogs can definitely get bored and even distressed by being left alone for long periods.

But what about by carrying out the same activities every day, like walking the same route?

We’re getting back into philosophical territory here, and there’s no proven answer either way.

There’s interesting evidence that we tend to project our own feelings onto dogs.

So if we’re in a slump and feeling jaded with an over familiar walking route, we’re more likely to interpret our dog’s behavior as being bored too.

How To Tell If Your Dog Is Bored

All in all, with the notable exception of being left home alone for too long, there’s nothing much in the way of evidence about what things make dogs bored.

But vets and behaviorists agree dogs can get bored. So just like for humans, the places they find boredom in their lives are likely to depend on the individual.

So a more reliable way to tell if your dog is bored is to watch their behavior for clues.

Here are some tell tale signs that a dog is bored.

This most applies to things like toys and training treats.

If your pup simply stops playing with a new toy after a few weeks, or stops being motivated by their usual training treats, it could be that the novelty has worn off and their appeal is a bit tarnished now.

Bored dogs can be very proactive about finding something to keep themselves busy.

Chewing furniture and digging are classic ways of passing the time if you’re a dog at a loose end.

Performing abnormal compulsive or repetitive behaviors, like tail chasing, licking or self grooming can be signs that a dog is bored.

It’s important to note that these can all be parts of normal behavior as well, but the problem arises when a dog starts performing them in an unhealthy way.

I can be hard to tell when a benign behavior has turned into a manifestation of stress or boredom.

A study in 2011 found that owners were more likely to interpret tail chasing as cute, funny, playing a harmless game or as a party trick, than as a sign of boredom.

Other behaviors of bored dogs include

Getting A Second Opinion

Canine behavior is complex. Lots of things dogs do can be borne out of boredom, or something else.

For example, it’s natural for terriers bred to flush out vermin to want to spend a lot of time digging.

Excessive licking could be due to nervousness, or skin irritation.

If your dog is behaving in a way which is odd, or unusual for them, as a vet to rule out any underlying medical causes, and consult a behaviorist if you can.

How To Stop Your Dog Feeling Bored

The key ingredients to staving off doggy boredom are:

In the final section, we present our eight favorite ideas for meeting these needs, so your dog is never bored again!

How Do You Prevent Your Dog Getting Bored?

We’d love to know what activities you’d add to our list!

Let us know what they are over on our forum.

Burn, A Vicious Cycle: A Cross-Sectional Study of Canine Tail-Chasing and Human Responses to It,  Plos One, 2011.

Hall et al, The role of environmental and owner-provided consequences in canine stereotypy and compulsive behavior, Journal of Veterinary Behavior, 2015.