Why do dogs bark?

Dogs bark to communicate a wide range of information.

And it’s thought that barking in pet dogs has changed and evolved with domestication.

So these days, a dog’s barks are just as likely to be directed at people, as at other dogs.

Although sometimes it seems like they’re barking at nothing at all!

But with a bit of patient observation, this article will help illuminate the reason why your dog is barking.

Dogs bark to communicate information that will change the behavior of other animals (including humans), and in doing so change their own environment. 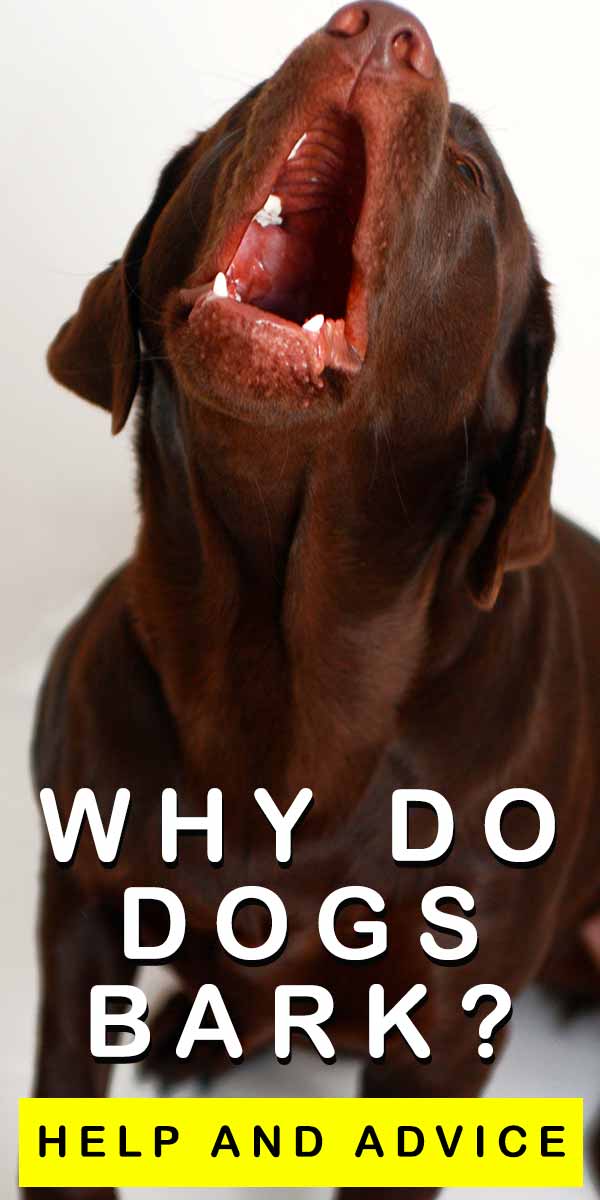 In this context, their ‘environment’ isn’t just the place they’re in, it’s also the things which are happening to them.

So the change in environment can include an increase in attention from us, or an unfamiliar dog going out of sight again.

But despite how closely we share our lives with dogs, there has been relatively little research carried out into the details of why they bark, or the limits of what they use barking for.

In this article, we take a detailed look at the research which has been published, and what it tells us.

Through observation and study, we know that dogs bark

If it seems unlikely that dogs can make and distinguish between so many types of bark, bear in mind how many different spoken cues from humans they can tell apart.

Their hearing is really quite nuanced when it comes to receiving information from people and other dogs!

The Evolution of Barking

Pet dogs bark more often than their closest wild relations (such as wolves, foxes and coyotes).

In the wild, barking is more associated with young animals.

So it’s thought that humans might have inadvertently made breeding choices which favored noisier dogs, whilst pursuing other “youthful” traits that we enjoy, such as seeking out company.

Of course, breeding dogs which bark a lot might not have been entirely an accident.

Let’s look at some examples of when people purposely valued noisy dogs!

Why Do Some Dogs Bark More Than Others?

There is a lot of variety in how much individual dogs bark, and also between breeds.

Basenjis for example still use a wide range of other vocalizations to communicate, including a distinctive yodel.

Dog breeds which bark a lot

On the other hand, some dog breeds bark a lot.

This is especially true of dogs bred to follow game in a pack. Beagles and Basset Hounds are famously noisy!

Their constant communication is key to their success as hunting dogs, and something breeders have actively selected for in the past.

Likewise, successful guarding breeds such as Akitas and German Shepherds are more likely than others to bark at unfamiliar people.

Historically this is something their owners would have appreciated very much!

Predicting whether your next dog will bark a lot

Of course, not all dogs fit the stereotype of their breed.

Whippets are generally regarded as quiet dogs, but I have a Whippet boy at home who definitely didn’t get the memo!

Likewise Labradors are not regarded as especially noisy dogs, but some do like to be heard.

Something to bear in mind, is that dogs who live with other dogs are more likely to bark than dogs in single-dog households.

Next let’s find out why that is.

Why Do Dogs Bark At Other Dogs?

Communicating with other members of your own species is also known as ‘intraspecific communication’.

Dogs use and understand many different types of barks as a method of intraspecific communication.

But it’s thought that barking is actually a pretty low-priority form of communication for dogs. A good sniff is much preferred!

Which may partly explain why some dogs greet a fellow canine quietly when they’re off the leash, but bark a greeting if they’re being restrained. To them, it feels like the next resort when their preferred method of greeting is being withheld.

In the same vein, dogs may bark to communicate with neighboring dogs they can’t see or smell.

This is most relevant in built up residential areas.

Why Do Dogs Bark At People?

Dogs bark at people for many of the same reasons they bark at other dogs.

To greet you, invite you to join in a game, or warn you away if you’re frightening them.

In fact, dogs’ willingness to communicate with humans was probably critical to their domestication.

The researchers suggested that it was the willingness of wolves to co-operate with human hunters in the past that spurred on their domestication.

Today, domestic dogs can produce a much broader range of distinct bark sounds than their wild ancestors too.

And researchers have speculated that this ability also arose at the same time as domestication, because our forefathers preferred the dogs who could communicate with them more efficiently.

These days we don’t always appreciate dogs’ efforts to communicate with us though!

Excessive barking is one of the most common complaints of dog owners.

And we’re less likely to adopt the barking dogs in a shelter.

Despite this, we’re pretty good at recognizing what dogs’ different barks mean – even if we’re not dog owners ourselves!

Why Do Dogs Bark In The Night?

Perhaps one of the most unwelcome times to hear our dogs bark, is late at night, or in the small hours of the morning.

In fact “why do dogs bark at night?” is one of our readers’ most frequently asked questions.

One study from 2010 suggests the most common reason for dogs barking at night is because they heard another dog bark.

Dogs often sleep lightly, and follow a very short sleep cycle, which means they regain consciousness briefly every 20 minutes or so.

So they’re easily disturbed by noises outside, and other dogs barking.

In built up areas, it’s easy for one dog who’s been disturbed by the sound of a cat or fox to trigger a ripple of barking across the neighborhood!

But another reason for night-time barking, is sleep-barking!

Why Do Dogs Bark In Their Sleep?

Yes it’s true, some dogs bark in their sleep!

Just like us, dogs have a rich dream life.

Usually when they dream, a region of their brain called the pons stops their muscles acting out the behaviors they’re dreaming of doing.

But sometimes dogs do still vocalize in their sleep. Just like a human sleep talking!

This is usually harmless. But if you’re worried that your dog’s dream is distressing them, call their name gently to wake them back up.

Why Do Dogs Bark At Nothing?

Finally we come to the dogs which seem to bark at nothing.

The ones who always bark at the same wall in an empty room, or who stop stock still for no apparent reason, and start woofing.

What’s got into these guys?

Well, even if it’s not immediately apparent to us why a do is barking, it’s unlikely that they’re barking for no reason at all.

Dogs can see, hear and smell things outside of the sensory range of humans.

It’s something we’ve written about more in our article Can Dogs See Ghosts!

Now we’ve looked at all the different reasons dogs bark, it would be helpful to be able to tell them apart!

Depending on context, dogs use pitch, tone, duration, and the length of the gap between barks to change their meaning.

Barks at disturbances, including strangers approaching their home, tend to be low pitched, harsh, and monotone.

Barks to communicate emotional states like playfulness or loneliness are more likely to be high pitched and multi-tonal.

Playful barks are more rapid and closely spaced, whilst lonely barks tend to have longer gaps in between.

Frequently, deciphering our dogs’ barks is simply a matter of familiarity.

The more time we spend with our dogs, and observe their behavior, the better we get at understanding them when they try to communicate with us!

Whatever reason your dog is barking, if they bark a lot, you’re likely to become irritated by it.

Discouraging barking is a separate topic in it’s own right, and here are some resources to help you get started.

On this site, Pippa has written about using positive reinforcement to teach a ‘quiet’ cue. We also have lots of valuable information in our Barking Center.

There’s evidence to suggest that Dog Appeasing Pheromone (DAP) collars and the scents of lavender and chamomile can reduce barking behaviors.

If you need more help and support, look for a qualified dog behaviorist in your area.

Sometimes medication can help dogs who bark due to separation anxiety.

What not to do

As a last resort, some dog owners have been tempted to resort to punishing their dog with an anti-barking collar.

Or even approach their vet about a vocal cordectomy (removal of the vocal cords) so that they physically can’t bark.

Punishing unwanted behaviors is not an effective way of preventing them, and can produce more undesirable results than sought-after ones.

Vocal cordectomies don’t address why the dog was barking in the first place, and dogs who receive this procedure may redirect their attempts to communicate into an equally unwanted behavior.

Furthermore, it is illegal in many regions.

Dogs bark as a means of communication.

Hopefully this article has shed some light on the reasons why your dog is barking.

But if you’re still not sure, or you’d like to chat to other dog owners about how to discourage barking, why not visit our forum?

Graham et al. The influence of olfactory stimulation on the behavior of dogs housed in a rescue shelter. Applied Animal Behavior Science. 2005.

Hermiston et al. The effects of dog-appeasing pheromone spray upon canine vocalizations and stress-related behaviors in a rescue shelter. Journal of Veterinary Behavior. 2018.

Yeon. The vocal communication of canines. Journal of Veterinary Behavior. 2007.