Is there such a thing as dog grief? There are lots of stories about dogs appearing to grieve for people, fellow dogs, and even cats and other animals when they die. However there are also skeptics who argue that just because their behavior looks like grief, it doesn’t mean that emotionally they mourn in the same way people do. But regardless of which camp you fall into, if your dog is out of spirits following the loss of a loved one, you’ll want to help them feel better again.

So in this article we’re answering lots of questions about dog grief, and also looking at how to help a grieving dog recover.

Dogs’ love and loyalty is so legendary, it’s almost impossible to imagine them being unmoved by the loss of their owner. Lots of dogs also live in pairs with another dog, and even form unlikely bonds with cats and other animals – from elephants to guinea pigs! But sadly bereavement is as unavoidable for dogs as it is for people. When it happens, how do you know if your dog is grieving? And how long do dogs grieve for their owners or other pets?

In humans, grief is the deep sadness we feel at the death of someone we loved. We don’t know if dogs feel deep sadness when someone dies, because they can’t describe their emotions to us. In that sense, their thoughts are completely private and unknowable. 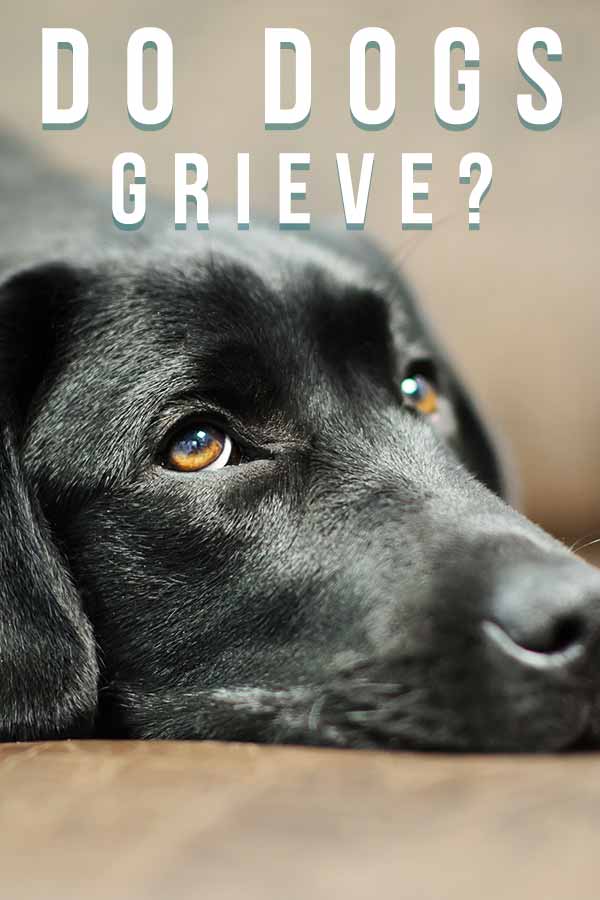 But it is widely accepted that dogs’ behavior often changes when they lose a person or animal they were close to. Some of the changes – such as a drop in energy and enthusiasm – look a lot like sadness. Some mimic the ways we behave when we’re grieving – such as loss of appetite. And some even look like they’re trying to tell us they’re sad – like crying.

Ultimately, there’s a lot we don’t know about whether dogs really feel things in the same way we do. But there are some fascinating accounts by people who believe that they have witnessed their dogs mourning. And it might not feel them same for them, but it that doesn’t make it any less real for them!

If your dog has lost a companion recently, you might have noticed some changes in their behavior too. Let’s explore what that might include next, then look at how to help them feel better.

How Do Dogs Grieve?

Different dogs can react differently to grief, but these are the most commonly behavior changes reported in bereaved dogs:

How Do You Know If Your Dog Is Grieving?

There’s an old adage among people that grief affects everyone differently. This is true of our dogs as well – one dog may grieve differently from the next. Each dog’s behavior might change a lot, or just a little.

Furthermore, it’s not always clear whether changes are caused directly by the absence of the lost person or pet, or whether they’re brought on indirectly by the change in circumstances and routine making them feel less secure. But no one knows your dog like you do. If your instinct tells you that their behavior or demeanor has changed since they lost a companion, then trust that.

Regardless of whether it’s a direct or indirect result of losing someone (or some pet) close to them, the advice for guiding them back to better spirits is the same. So let’s look at that next.

How To Help A Grieving Dog

If your dog is experiencing grief at the loss of a loved one, these are the things you can do to help them.

The first decision you might have to make is whether to let your dog view the body of a companion they have lost. There are conflicting opinions about whether dogs process grief more easily by doing this. Some people think it helps them understand that their friend is gone, and won’t be coming back. Other people doubt that they have enough understanding of death and mortality. Or they have tried doing it both ways in the past, and didn’t notice any difference.

The truth is, there’s no meaningful evidence either way. And in some cases it simply isn’t practical for your dog to view a body. Make your own decision about what’s right for you and your dog, and don’t let other people worry you with their opinions of what they think you “should” do.

Focus on maintaining the basics

Time, as they say, is the greatest healer. There are some ways of speeding the adjustment process along, but more than anything else, your dog just needs you to be there for them, and keep providing the security of your care. Try to make sure they eat enough and drink enough every day, continue going out to the toilet as usual, and get as much of their usual exercise as they can be tempted into.

Routine and predictability is hugely reassuring for bereaved dogs. Try to carry out the same sequence of daily activities they’ve been used to in the past. If a mourning dog isn’t eating, it can be tempting to change their routine so that their meals are more appetising – for example making home cooked meals, or feeding them by hand. Make changes like this judiciously though, since they can end up being counter productive – and even encourage your dog to keep up grieving behaviors for longer.

Another example like this would be allowing a grieving dog into your bed at night. Think hard about whether this is a route you want to go down. Returning them to their usual sleeping place might cause a relapse of “mourning” behaviors, not because they’re still sad, but because they associate them with being allowed under the duvet!

Do things they love

That being said, there’s no harm in reigniting their enthusiasm for life by reminding them of the thing they love. Go on a favorite walk, take them to the beach, get out their favorite toys or visit a friend they love.

It’s hard to see our canine friends feeling sad, and compassion tells us to respond to their sadness. Unfortunately as we’ve seen, that can have the result of making sad behaviors rewarding for your dog, so that they do them to gain rewards, not because they’re still grieving. So try to focus on rewarding their normal behaviors instead. Be there for them when they’re sad, but celebrate when they’re happy.

It’s not a case of trying to ignore or suppress their grief, but helping them to navigate it in a way which complements how their thought processes work.

Most dogs recover from grief in their own time. But some dogs really struggle to recover, and that’s when medicines might help. Over the counter collars and diffusers containing dog appeasing pheromone (such as Adaptil) can help manage the anxiety felt by bereaved dogs. And in the most severe cases, a vet may recommend antidepressants.

Whenever your dog’s behavior becomes a worry, always consult your vet for advice and support.

How Long Do Dogs Grieve The Loss Of Another Dog?

Grief is unique to the individual experiencing it, so there’s no rule for how long it lasts, or when you can expect it to be over. If you’re worried that your dog is trapped in a protracted state of mourning, ask your vet for advice.

On the other hand, don’t be alarmed if your dog doesn’t appear to grieve for another dog at all. In multi dog households, some dogs are just as likely to enjoy the increase in attention from their owners when a fellow dog dies. It’s also possible that they simply don’t understand the significance of what has happened. They might just think the other dog is “somewhere else”.

How Long Do Dogs Grieve For Their Owners?

Lots of people are familiar with the famous story of Hachiko, the Akita who used to wait for his owner at the train station at the end of every working day, and continued to do so for over 9 years after his death.

Stories like this capture our imagination, but a much larger proportion of dogs eventually move on with their remaining family members, or in a new family. Which is really an altogether happier outcome, even if it makes us feel a little pang inside. However, there’s no hard and fast rule for how long it takes them to reach that point.

If you’re worried that your dog has been carrying their grief for so long that it’s harming their well being, ask your vet for support.

Do dogs grieve? When all’s said and done, it’s a bit of a philosophical point. There’s an increasing amount of documented evidence that dogs’ behavior changes when their owner or another pet in the household dies. And whilst that evidence is based upon gathering anecdotes at the moment, some researchers have expressed hope that it will spur on the search for more tangible neurological evidence.

Has your Lab experienced grief?

Perhaps you’ve found us because you’re worried that they’re grieving at the moment. The Labrador parents over on our forum have a wealth of experience between them, and always offer warmth and support to grieving dogs and their owners.

Walker et al, Owners’ Perceptions of Their Animal’s Behavioral Response to the Loss of an Animal Companion, Animals, 2016.

Coren, Do Dogs Grieve Over the Loss of an Animal Companion? Psychology Today, 2016.

The Elephant Sanctuary – Tara and Bella: A Match Made in Ele-Heaven, Youtube, 2009.