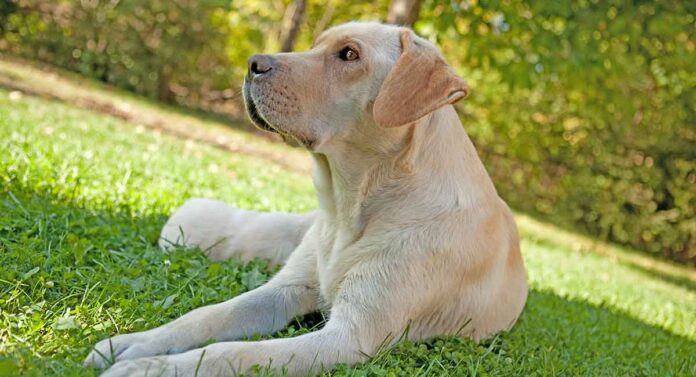 False pregnancy in dogs is a serious condition. Find out the signs and symptoms of dog phantom pregnancies, how long they last, and how to help.

Your female dog could show signs of pregnancy – even though she’s not! This condition, also called phantom pregnancy or pseudopregnancy, is quite common in dogs.

In this complete guide to phantom pregnancy in dogs, we’ll tell you all you need to know about this condition. Also how to help her get through it in a safe and healthy way.

You can use the following links to quickly get the answer to your most pressing question.

What Is False Pregnancy in Dogs?

A phantom pregnancy occurs in mammals when they show the signs of pregnancy but are in fact not pregnant.

Humans and other animals also experience false pregnancies but they are rare compared to phantom pregnancies in dogs. It is to do with hormonal differences between species.

Scientists believe that pseudopregnancies in canines had an evolutionary function. That it allowed primitive she-wolves to nurse the offspring of other females in the pack.

So let’s have a closer look at false pregnancies in dogs.

Why do dogs have phantom pregnancies?

Reproduction is driven by hormones and false pregnancy in dogs is thought to be caused by their unique reproductive pattern. But the exact reason for this not fully understood.

Pseudopregnancy in dogs usually occurs from 6 to 12 weeks after the female dog was in “heat” (estrus).

The various symptoms are caused by levels of the hormones progesterone and prolactin. Prolactin, for example, is the hormone that stimulates milk production.

False pregnancy can also be caused by exposure to and subsequent withdrawal from progesterone, the hormone that regulates ovulation and menstruation.

Furthermore, pseudopregnancy in dogs seems to be influenced by factors in the environment, nutrition and breed. The age of the dog and number of times she has given birth also affects her likelihood of developing this condition.

So what are the chances that your dog will develop a pseudopregnancy?

How common is false pregnancy in dogs?

Scientists have estimated that around 50% of dogs who haven’t been spayed will develop a pseudopregnancy during their lifetime. Sometimes it can be as high as 75%, particularly in some breeds – including Afghan hounds, Beagles and Dachshunds.

Once your dog has had a phantom pregnancy, the chances of it happening again after future estrus cycles are also increased. There are dogs that experience a false pregnancy after every season if they weren’t successfully mated.

Some vets even believe that most female dogs will show some signs of a false pregnancy after every estrus cycle. These signs are often so mild that they go undetected.

However, these undiagnosed false pregnancies could also be a reason behind behavioral problems, including aggression. This might even result in some dogs being rehomed or euthanised unnecessarily.

So what the signs of false pregnancy in dogs? They can vary a lot from dog to dog and from season to season. 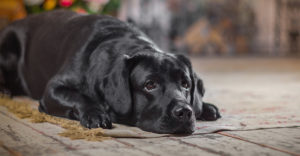 Root and others recently published a landmark survey among vets about phantom pregnancy in dogs. They confirmed that changes in behavior were often the only sign of a phantom pregnancy. Ninety-six percent of the vets reported that they had seen pseudopregnant dogs that showed only behavioral signs.

The most common sign, seen in 96% of cases, was for the dog to collect and mother objects – like a soft toy. This was followed by the dog being less active and displaying nesting behavior – preparing the place to have her pups, just like pregnant dogs do.

Most of the vets reported that they had seen aggressive behavior in dogs with phantom pregnancies. The reason for this is most probably to defend their den.

When physical symptoms of a pseudopregnancy develop, this usually happens a bit later.

The physical symptoms of false pregnancy in dogs

The most common physical symptom you’ll notice is that your dog’s nipples become darker and that her mammary glands become enlarged. This is in response to the high levels of prolactin.

Other physical signs could include loss of appetite and vomiting. Some dogs lose weight, while others could gain. Weight gain is often caused by fluid retention and the dog can develop a swollen, bloated belly.

A mucous discharge from the vagina is also not uncommon. Some dogs could even have contractions similar to those seen in labour

So how long does a phantom/false pregnancy in dogs last?

Duration of a pseudopregnancy in dogs

The signs and symptoms of false pregnancy in dogs usually run their own natural course.  They normally subside in two to three weeks without needing treatment.

The duration can however be influenced by factors like the dog’s overall health, the extent of the hormonal imbalance, and the dog’s breed.

You should have your dog checked by a vet if the condition carries on for longer than four weeks. Or if any of the above mentioned symptoms become severe. 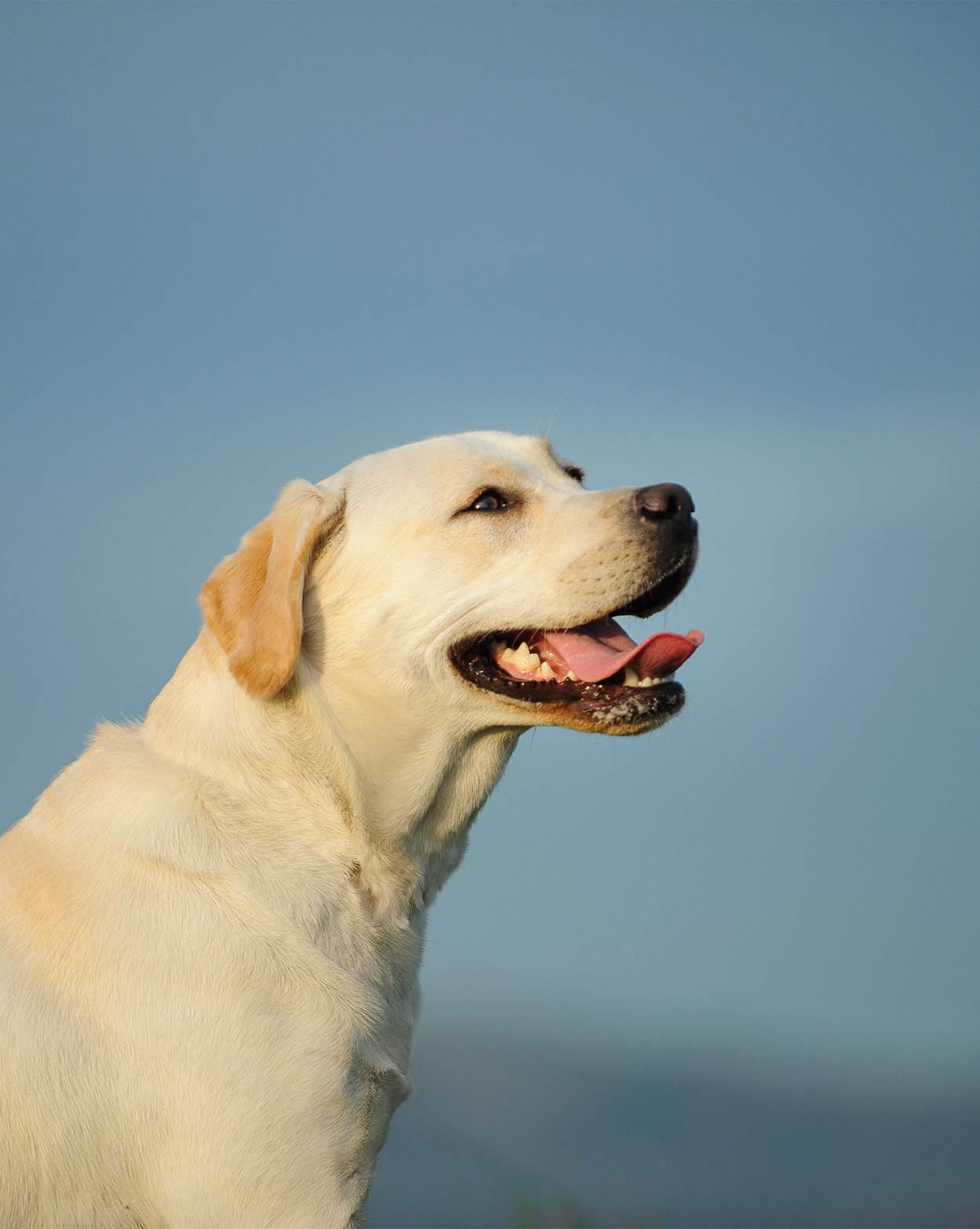 Your dog may need treatment to prevent complications. Or she might actually be pregnant or suffer from another condition with similar symptoms.

Complications of False Pregnancy in Dogs

When your dog has a phantom pregnancy she isn’t at high risk of developing complications.

The two complications that occur most often are infection of the mammary glands or irritation and inflammation of the skin around the glands. These conditions could make your dog quite ill and need to be treated by your vet.

Frequent pseudo pregnancies could also increase your dog’s chances of developing pyometra, infection in the uterus, and tumors in her mammary glands.

However, signs similar to a pseudopregnancy are also seen in some serious conditions. These include an inactive thyroid gland, benign tumors of the pituitary gland in the brain, and pyometra.

Other symptoms of pyometra are lethargy, vomiting and a foul smelling discharge from the vagina. So if your dog has any of these symptoms as well you should definitely take her to the vet.

The signs that look like a pregnancy might, of course, also mean that your dog is actually pregnant.

It can be difficult to tell a phantom pregnancy in dogs from a real pregnancy.

So unless you’re 100% certain that there was no chance that your dog could have mated you might want to make sure that she isn’t pregnant.

This will require a visit to the vet. An ultrasound can confirm or rule out pregnancy by time symptoms of a false pregnancy in dogs show up around 6 weeks after the estrus cycle.

If your dog is not pregnant the vet will also examine her to rule out any of the other conditions that could cause breast development and milk production.

When a real pregnancy, or any other condition, has been ruled out you’re probably asking: “My dog is having a phantom pregnancy, what do i do?”

How to treat false pregnancy in dogs

A pseudo pregnancy in dogs is usually self-limiting. Most cases are mild and don’t need treatment.

The one thing that vets do recommend is to stop your dog from licking her mammary glands. You should also avoid brushing and touching this area.

This stimulates more milk production which can make condition last longer. It also increases her chances of getting an infection.

You can use an Elizabethan collar to stop her from licking, or even a t-shirt.

Some vets suggest that milk production can be reduced by removing her water overnight to limit her fluid intake. However, it’s best to do so only under the instruction of a vet.

You should ask your vet if the signs of the false pregnancy become worrying or if she appears ill. Also if the symptoms last longer than four weeks.

What Your Vet Can Do

The study by Root et Al found that, on average, 52% of cases of phantom pregnancy in dogs seen by vets were not treated.

The current treatment of choice, used by vets far more than any other, is Cabergoline. This medication reduces prolactin and stops milk production. It is long-lasting and has very few side effects.

It is usually given for 5-10 days but the length of the treatment varies from dog to dog.

In the past pseudopregnancies were often treated with hormones, including estrogens, progestrogens and androgens. But, their benefits generally outweigh their many side effects. For example, progestins can actually cause pyometra.

Your dog’s vet might also prescribe mild sedatives to reduce anxiety or aggression. Sometimes diuretics are given to both reduce milk production and relieve fluid retention.

Now you might be wondering whether there is a way to prevent a false pregnancy from happening in the first place – particularly if your pet goes through this often.

How to stop pseudopregnancy in dogs

The only, and permanent, way to prevent phantom pregnancy in dogs is by having them spayed. This is the best solution unless, of course, you intend to breed with your dog.

When her ovaries are removed she no longer experiences estrus cycles or the hormonal cascade that causes phantom pregnancies.

You might have heard of spayed dogs having a false pregnancy – and this does happen. But only if she is spayed while she is experiencing a pseudopregnancy or still feeding her pups.

Can A Spayed Dog Have A False Pregnancy?

This happens if they’re spayed while they still have symptoms of a false pregnancy. The cause is related to the interruption of the normal hormonal cycle by the operation.

The symptoms could become more apparent and even persistent after spaying – especially in dogs that often had false pregnancies.

The main sign is usually enlarged mammary glands and milk production. Root et al also believe that a pseudopregnancy might even be the reason why some owners report that their dogs are more aggressive after being spayed.

This is why your vet will recommend that your dog should only be spayed once she no longer has any of the symptoms of a false pregnancy. 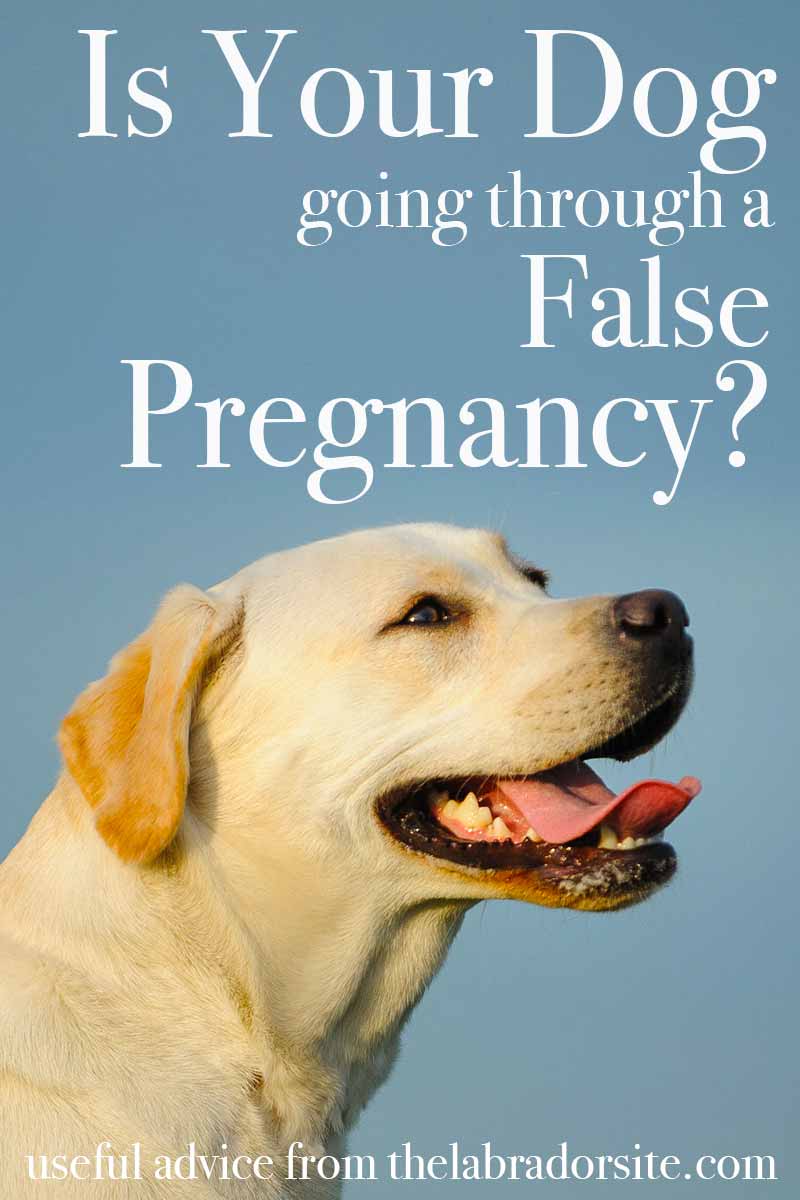 False pregnancy in dogs – a summary

If you think your dog may be suffering from a false pregnancy, don’t panic!

Taking some minor actions can help make her more comfortable and symptoms will often subside on their own without treatment.

If your dog experiences severe symptoms or multiple episodes, it’s best to speak to your vet.

The only sure way to prevent a false pregnancy is by getting your dog spayed.

Has your dog had a false pregnancy? What did you do? Please share your experiences in the comments section below.

This article has been extensively revised and updated for 2019.