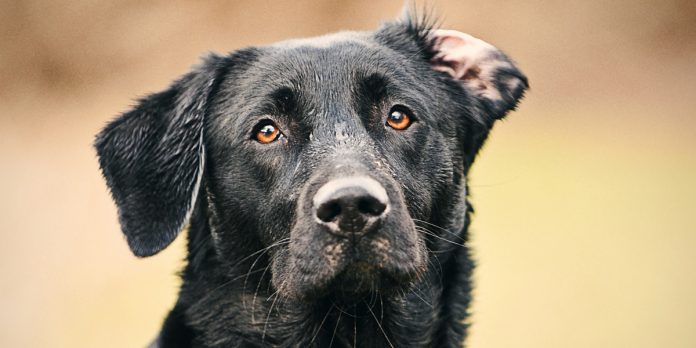 Your Labrador’s wagging tail is a big part of who he is. It can be quite a shock to see that your dog has lost his wag, especially if his tail appears to be injured. The tail of a dog with limber tail may hang lifelessly from the root or stick out a little before drooping down. It is sometimes called called ’broken wag’ or ‘dead tail’. ‘Swimmers tail’, or ‘cold water tail’ are other names for this condition.

Affected dogs tend to look very miserable, but if your dog has limber tail, the good news is, with the right treatment, he’ll soon be on the mend. Let’s find out what has happened to him.

My Labradors Tail Has Stopped Wagging

Limber tail is a painful condition affecting dogs of all ages, but it seems to be more common in larger working dogs. It has anecdotally been linked to prolonged swimming in cold water, and one study has shown that swimming is a risk factor, although not a necessary precursor.

When a dog is struck by limber tail, the pain seems to be focused on the base or root of the tail, and the dog is clearly not able to wag or move it. Sometimes it hangs limply from the root, but it often sticks out a little way from the base, before drooping down. Affected dogs may be reluctant to sit down and clearly in pain

Veterinarians have noticed that dogs with limber tail may have several things in common.  The first is unaccustomed exercise. So for example, this condition is seen in working dogs that have just returned to work at the start of the shooting season. A 2016 cohort study has shown that working dogs are more susceptible to limber tail than non-working dogs.

Another contributory factor is confinement. Dogs that have be crated for example for a long journey appear to be more susceptible.

Until recently it was seen as quite a mysterious condition, with some sources claiming that spinal problems involving bones or nerves were implicated. But a study on working dogs  carried out in 1999 suggested otherwise. In the dogs they examined that were suffering from limber tail they found clear evidence of muscle damage. They also noted that all the dogs had a recent history of one or more of the following

A 2016 study looking at 38 cases of limber tail and 86 controls, has found more dogs with limber tail to be related than you would find by chance. Suggesting that there may be a genetic component to the condition – although this needs further study to be confirmed.

How To Avoid Limber Tail

You may be able to influence whether or not your dog experiences an attack of limber tail. For example, if you work your Labrador during the shooting season, you should help him build up to full fitness gradually, several weeks in advance.

This may be especially important if your dog spends a lot of time retrieving in cold water. And it might be especially worthwhile if he has already had an attack in the past,  though many dogs who experience limber tail, do so only once. You can also help him by treating each attack promptly when it occurs.

The first thing to do is get your dog to a vet without delay. Anti-inflammatories may be effective in reducing the length of the attack if administered in the first 24 hours. Not to mention the fact that it hurts!  There’s no reason to keep your dog waiting for pain relief. Don’t give him human drugs, some are harmful to dogs, get your vet to prescribe the right medication

It is also important to rule out other possible problems.  This is because there are other, potentially more serious conditions, which can cause similar symptoms.

The key to recovery is rest.  Your vet will probably advise this together with anti-inflammatory pain killers. Most dogs recover from the symptoms within a few days.  Though it can take a week or more for full recovery.

The pain and loss of movement in the tail is now thought to be caused by injury to the tail muscles, typically brought on by exercise, particularly in cold conditions. Current thinking is that it may be more likely to occur in dogs which are exercised hard when somewhat out of condition

There are no strict rules governing the progress of limber tail. But most dogs make a full recovery and with care you should be able to avoid a recurrence and keep your dog’s tail wagging. Has your dog ever had limber tail?  Share your story with us in the comments box below.

You can find out more about how to keep your Labrador as fit and healthy as possible in the Health section of our website.