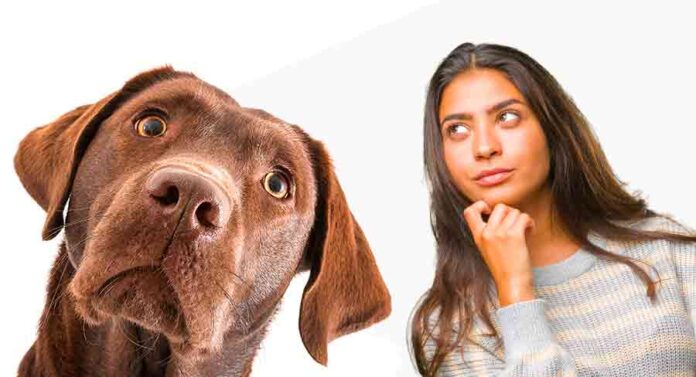 In this article we present all the scientific research on the pros and cons of neutering a Labrador, to help you make the right choice for your boy.

Neutering your male dog is a very personal decision. Whilst there are only two options in the end – do it or don’t do it – the decision making process for each dog owner is completely unique to them. And for people who are still undecided, there are a couple of alternatives, if you have the budget for them.

When it comes to neutering, there’s no right or wrong answer. At least, not in countries without laws requiring or prohibiting neuter procedures for dogs. For example in Norway, neutering dogs is illegal unless a veterinarian deems it medically necessary. In America, where neutering is a matter of owner choice, the proportion of neutered males is 64% – but this includes rescue dogs who were neutered as a matter of routine before being rehomed. In the United Kingdom, a study specifically of Labrador Retrievers revealed that 55% of male dogs were neutered. Which clearly illustrates how equally split dog owners are about the right decision for them.

The Pros And Cons Of Neutering A Lab

To reach the right decision for you and your Lab, you’ll need to decide how much weight each of the advantage and disadvantages of neutering has for you. And whether the overall balance or risk vs benefit is tipped in either direction. To help you, there has been lots of research into the effects of neutering. And we’re going to sum it up now. 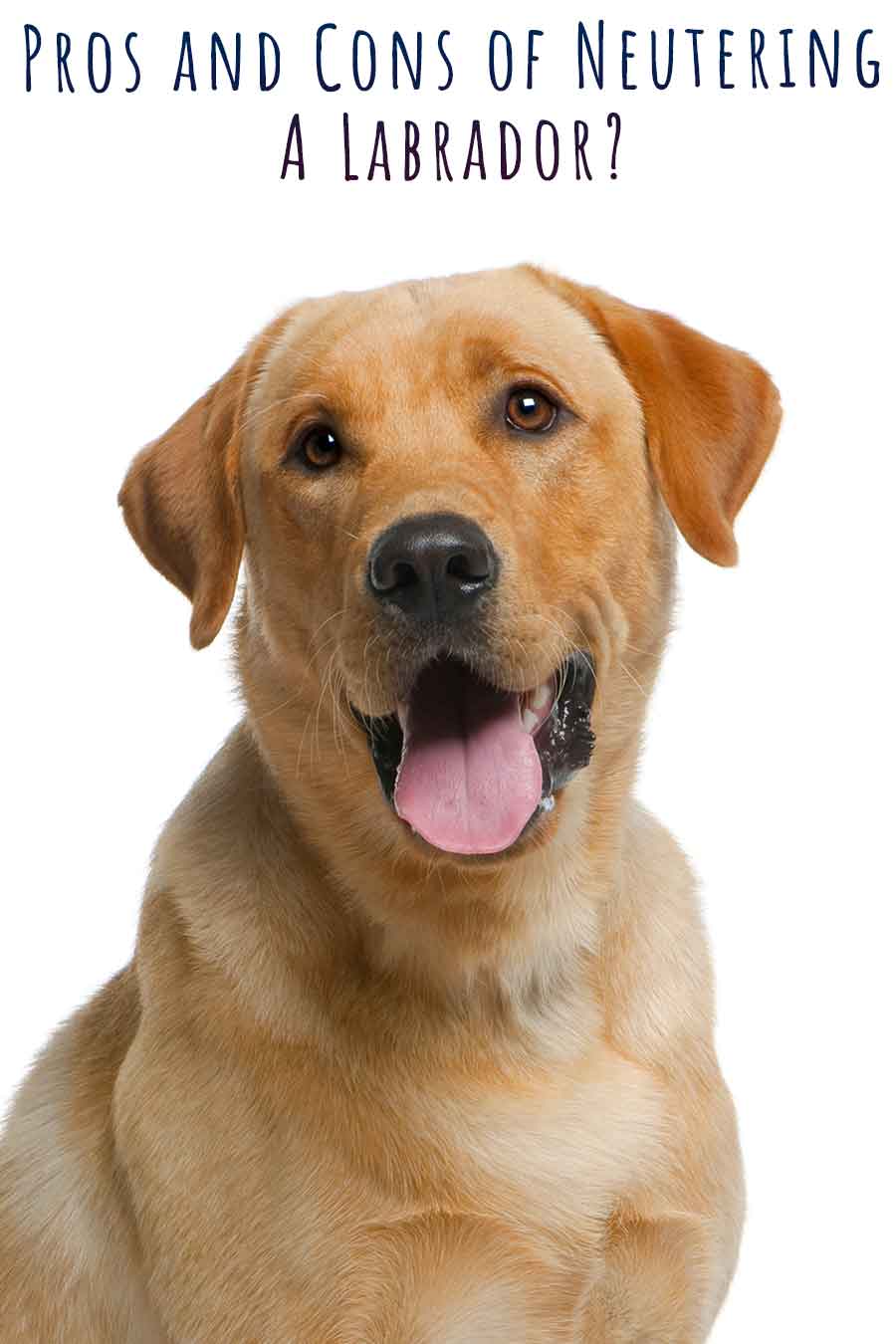 This is the big one for most people. Neutering is a permanent, reliable way to prevent your dog from fathering unwanted litters. Which in turn, means fewer dogs in the world that need homing, and fewer homeless dogs in shelters or being euthanized.

This advantage of neutering is especially pertinent if you also own a female dog. Non-neutered male dogs and females in season will go to extreme lengths to get to each other. They will cry and bark and generally make a racket for several days, and jump, climb, or dig their way past obstacles to get at each other. You male Lab will do the same if he can smell a female dog in season nearby. So if your neighbors have unspayed female dogs, an intact male Labrador will go to desperate lengths to gain access to them too. Neutering doesn’t just make conceiving puppies impossible, it kills dogs’ instinct to even try, so you don’t have to deal with these behaviors.

Testicular cancer is relatively uncommon in dogs, but by definition, dogs without testicles can’t get it at all.

On the other hand, several prostate diseases, including benign prostatic hyperplasia (BPH) and prostatitis are quite common. BPH affects up to 40% of intact dogs under 7 yrs old, and over 60% of intact dogs over 7 years old. Prostate diseases can make peeing difficult or painful for dogs, and cause bleeding from the prepuce surrounding their penis. Neutering is an effective cure for both BPH and prostatitis, and neutered dogs rarely develop either condition in the first place.

Data from a study of Shetland Sheepdogs has suggested that neutering may improve trainability. However, the number of dogs included in the study was small, and at the time of writing, no one has tried to replicate the same result with a larger sample size, or a variety of different breeds. Labradors are also very trainable dogs anyway – especially those from working lines – so it’s impossible to say how much really stands to be gained by neutering. On balance, we’re not convinced that this is a compelling reason to neuter a dog at the moment. But it is an interesting prospect, which we hope will generate more research in time.

Next, let’s move on to the disadvantages of neutering.

CON: Neutering can increase the risk of joint disorders

Labradors are a large breed with a high frequency of hip dysplasia – approximately 1 in 8 Labs are affected. In addition, 1 in 10 Labs have elbow dysplasia, 1 in 33 have problems with their shoulder joints, and 1 in 50 have problems with their knees. In one study of Labrador Retrievers, neutering at less than 6 months old doubled the incidence of one or more joint disorders, including hip dysplasia.

This is because testosterone produced in the testes plays an important role in skeletal growth. It is one of the signals that tells the growth plates at the ends of dogs’ bones when to close, and stop growing. If dogs are neutered before they finish growing, they grow taller than they would have otherwise, and the extra bone growth can put stress on the surrounding tissues (such as ligaments and tendons) and increase the risk of joint injury, and also progressive joint diseases like those above.

This can be largely avoided by waiting until after a dog has finished growing before neutering them.

Approximately 20% of neutered dogs are overweight, compared to 10% of intact dogs.

Obesity also puts extra strain on dogs’ joints, as well as their internal organs, such as their heart and liver. Overweight dogs also have shorter lifespans overall than dogs kept at a healthy weight. Neutered dogs can be kept at a healthy weight through diet and exercise, but it’s clear that a lot of Lab owners struggle to find that balance. Probably because a Lab will try to have you believe they are eternally starving!

Atopic dermatitis is when a dog’s skin becomes inflamed and itchy due as a result of eating, breathing, or touching something which should normally be harmless. For example, eating chicken, inhaling their owner’s aftershave, or sleeping on bedding washed with a detergent they’re allergic to. The inflamed and itchy skin is painful in itself. But if dogs scratch it too much, it can also become a place where infections enter the body.

Atopic dermatitis has a strong hereditary component, so affected dogs should never be used for breeding. But neutering is also associated with an increased risk of atopic dermatitis in Labradors.

One study into the health outcomes of dogs diagnosed with epilepsy found that intact  males lived for longer after an epilepsy diagnosis that neutered dogs. On average, intact dogs survived for 3 years and 11 months after an epilepsy diagnosis, whilst neutered males survived for 3 years and 4 months. It’s important to bear in mind though, that a fairly small number of Labradors will develop epilepsy in the first case (around 3%). And there’s no evidence that being neutered makes a Lab more likely to get epilepsy in the first place.

CON: May increase the risk of some cancers

There is some evidence that neutering may increase the risk of some cancers, including

However, there are a couple of things to bear in mind. Firstly a link established between neutering and specific cancers in one breed doesn’t necessarily translate across to other breeds. And there haven’t been any Lab-specific studies of this risk yet. And secondly, these conditions are extremely rare in the first place, so even the increased risk is still very low.

CON: Increased the risk of other diseases

However, these odds of getting any one of these conditions is also affected by a host of genetic and environmental factors too. And so far, we don’t know the relative significance of neuter status. Furthermore, they are all very treatable and manageable using medicines and lifestyle changes.

Does Neutering Increase The Risk Of Cancer?

As we’ve seen, neutering may increase the possibility of dogs generally getting some very specific cancers. However, a study of Labradors specifically found that neutering had a minor effect on the frequency of cancers generally.

So what are you supposed to make of that? Well, deciding whether or not to neuter your dog will be a matter of weighing up all the potential benefits vs the potential risks. All the evidence suggests that the increased likelihood of cancer is very, very, small.

For a lot of people, the potential for neutering to change a dog’s behavior (for better or worse) is of significant interest. But unfortunately, it’s also the hardest to draw conclusions about.

A review article of the effects of neutering concluded that intact male dogs are disproportionately involved in aggressive or problematic behavior. Specifically, it referred to evidence that neutered dogs were

And it also referred to studies suggesting that intact males are more likely to bite humans than neutered males. However, the suitability of neutering as a tool for managing behavior problems is still disputed, since all of them can also be managed by other methods which don’t have medical side effects. For example, fencing prevents roaming, and counter conditioning with or without the help of a qualified behaviorist can reduce aggression.

Alternatives To Neutering For Labradors

The main advantage of neutering for most people is birth control. But luckily, neutering by castration isn’t the only way of achieving that. If you’re worried about unwanted consequences of physical castration, you can also talk to your vet about chemical castration, or a vasectomy.

Chemical castration works by placing an implant under the dog’s skin, which suppresses testosterone production for either 6 or 12 months, depending on the brand. The main advantage of this is that it replicates the effect of physical castration, but it is reversible. The disadvantage is the recurring cost if you decide to rely on it over the long term. But it’s a good way of finding out how neutering might affect your dog’s behavior.

A vasectomy involves severing the tubes which deliver semen from the testes to the penis. It’s an effective form of birth control, without depriving a dog of the testosterone produced in the testes. The main drawback of vasectomies for dogs is that many veterinarians regard them as a bit unorthodox, and don’t offer them.

Pros And Cons Of Neutering A Labrador – Summary

There are both pros and cons to neutering a Labrador, and you’ll need to decide how much weight to give each of them, according to your own circumstances. Once you have reached a decision you’re confident in, accept that some people will want to tell you in the strongest terms that you got it wrong, and ignore them.

Sundburg et al. Gonadectomy effects on the risk of immune disorders in the dog: a retrospective study. BMC Veterinary Research. 2016.

Van Merveene. Associations between neutering and idiopathic epilepsy in Labrador retrievers and Border collies under primary veterinary care in the UK. The Veterinary Journal. 2019.