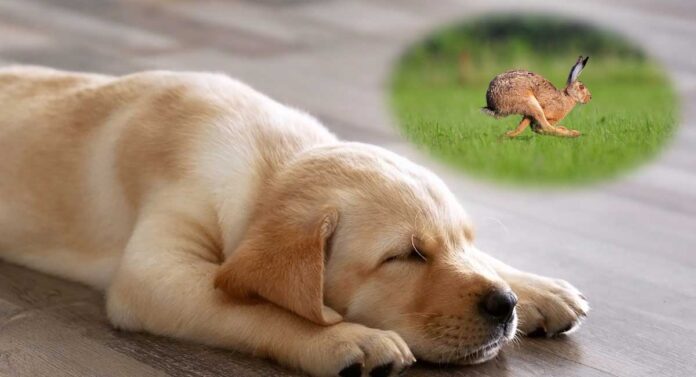 Have your dog’s sleeping habits left you wondering: do dogs dream? Yes! Dogs have dreams just like humans do. And just like people’s dreams, dogs’ dreams often reflect what they’ve been doing that day. The most recent research into dog sleep suggests that dreaming plays an important part in their memory and learning. Let’s find out more about our dog’s dreams.

Do Dogs Dream – And What Do They Dream About?

Have you ever watched your dog sleeping and wondered what dogs dream about? Are dogs dreaming when they twitch or bark in their sleep, or are dreams the preserve of humans alone? If they dream, what do they gain from it?

Here’s everything we know about the dream life of dogs.

They certainly can! Just like humans, dogs go through cycles of quiet sleep and REM sleep. REM sleep is characterized by increased brain activity. When humans are woken during REM sleep they almost always report that they were dreaming.

How Do You Know If A Dog Is Dreaming?

But how can we be sure that humans aren’t the only ones who dream in REM sleep? Well much of our understanding about dogs’ dreams comes from a study into the dream life of rats, conducted at MIT by researchers called Louie and Wilson. Rats’ brains are structurally similar to ours, but less sophisticated. Dogs’ brains fall somewhere in between, so it’s reasonable to assume that if rats demonstrably dream like us, dogs do too.

What Did They Find?

What Do Dogs Dream About?

From Louie and Wilson’s experiment, we know that one of the things dogs dream about is their experience of the preceding day. In their dreams they relive events and activities they carried out. But do they see the people they met as well?

Do Dogs Dream About Their Owners?

The answer is yes they do! Since dogs dream about everyday doggy things, their dreams almost certainly include their interactions with you. And Louie and Wilson also reported that the visual cortex in their rats’ brains was active at the same time as the parts of the brain reliving the day’s activities. So rats and dogs almost certainly “see” what they are dreaming.

We know a few more things about dogs’ dreams as well. Firstly, we know that Pointers dream for roughly six minutes at a time, and they dream on average twice in an 80 minute sleep cycle. Secondly, we know that small breeds of dog have shorter, more frequent, dreams than large breeds. We don’t know exactly why that is yet. But in other animals it appears that REM sleep interferes with signals in the body that enable temperature regulation. Since small animals lose body heat more quickly than large animals, they might come out of REM sleep more frequently to check they are still the right temperature.

A recent study in Hungary also found that dogs sleep more and dream more after an active day – no surprises there! And they found that they’re less likely to dream when they’re sleeping in an unfamiliar environment – possibly they sleep more lightly as a way of remaining “on guard”.

Why Do Dogs Twitch In Their Sleep?

Have you ever noticed your dog twitch or appear to have muscle spasms in their sleep? While they’re asleep a small area of the brain called the pons prevents dogs’ muscles from acting out the movements they make in their dreams. Sometimes though, the odd movement still gets through. This is especially common in puppies, when the pons is still underdeveloped, and in older dogs, when it starts to deteriorate.

What Do Dogs Dream About When They Twitch?

Those twitches are reduced forms of the movements your dog is dreaming of themselves making. We know that dogs dream about things which have happened to them. So if your dog’s twitches look like he’s chasing hares in the park again, that’s probably exactly what he is dreaming about!

Why Do Dogs Bark In Their Sleep?

A small study at Murdoch University in Australia in 1993 found that about two thirds of dogs bark in their sleep, and half of those barked more than five times in eight hours overnight. Like moving about, our dogs’ brains usually suppress vocalizations while they are asleep. But occasionally the odd sound will slip out. If your dog is barking while sleeping, it’s as harmless as sleep talking in humans, and nothing to worry about.

Why Do Dogs Dream?

This is such a tantalizing question! Because we don’t know the purpose of dreaming in dogs yet, or even humans! Dreams are such vivid experiences which unite us all, but neuroscientists are still trying to crack the secret of why we do it. A popular theory at the moment is that dreaming somehow reinforces our memories and makes connections between them. This would make it an important part of learning.

And in 2017 scientists published new evidence that dogs’ dreams affect how they learn. In that study, learning a new task before they slept affected dogs’ brain activity during their sleep. And the altered brain activity while they slept was linked to improved performance in the same task when they woke up. The researchers also found a link between sleep and awake activity after learning a new task and remembering the new task over the short and long term.

Do Dogs Have Bad Dreams?

So far, all of the evidence suggests that dogs use dreams to process their memories and experiences in the same way we do. So it stands to reason that they probably fall victim to the occasional nightmare as well, especially if something upsetting has happened to them.

Fortunately, just like bad dreams can’t hurt us, rest assured they can’t hurt your dog either. In very rare cases, some dogs display abnormal dream enactment following contracting tetanus, which owners describe as like watching them have nightmares. If this is something you’re worried about, have a chat with your vet.

Should I Wake My Dog Having Nightmares?

We all know how disorientating it is to be woken from a vivid dream. Our eyes fly open and our hearts race while we try to work out where we are, what’s real, and what isn’t. It’s likely our dogs feel the same way. Dogs who are startled out of sleep and disorientated are more likely snap at someone in their space. Never disturb your sleeping dog if you can avoid it.

First, remember that the dream will end soon, and it can’t hurt them. If watching them is upsetting you, then take yourself out of the room for five minutes. When you return they will probably have woken themselves, or returned to quiet sleep. If you really can’t do nothing, stand at a distance from your pet, and softly call their name and talk to them until they come around.

Do Dogs Dream When They Sleep?

As we’ve seen, everything we know about their sleep so far suggests that they do. Just like us, dogs go through cycles of dreamless sleep and REM sleep, and they use dreams of their daily activities to process and consolidate new memories. They probably see you in their dreams as well! And across the world, researchers are studying all aspects of dogs’ sleep to find out if it can improve our understanding of the evolution and function of human sleep too. Which is just another remarkable way dogs contribute to our lives without even realising.

What does your dog dream of?

Does your dog have an active dream life? Do they act out any parts of their dreams? Please share your experiences in the comments section.