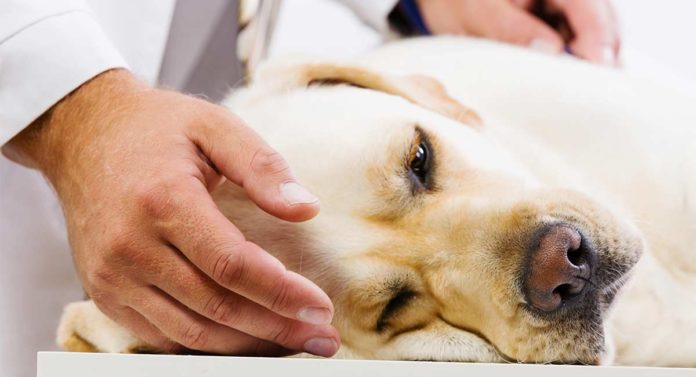 Pancreatitis in dogs causes symptoms such as poor appetite, sickness and stomachache.

But these are general signs and linked to other problems such as scavenging or a tummy bug.

But whereas a stomach upset is often no big deal, pancreatitis is more serious.

By understanding more about dogs and pancreatitis, an owner can spot the problem earlier and seek help sooner.

What Is Pancreatitis in Dogs?

The word “pancreatitis” literally means “inflammation of the pancreas.”

The pancreas is a small digestive organ lying alongside duodenum (the piece of gut that exits the stomach).

Its job is to produce digestive juices and squirt them into the small intestine to break down and digest fatty food.

When the pancreas is inflamed, it becomes leaky.

Instead of those strong digestive juices being kept safe inside the pancreatic cells, they leak out.

The result is the pancreas accidentally digests itself.

Signs of Pancreatitis in Dogs

The tricky thing about pancreatitis in dogs is there’s no black and white outcome.

Some dogs have mild pancreatitis and are barely off-color, whilst others are suddenly very ill.

For the purposes of treatment, the vet may designate your dog’s pancreatitis into one of two groups:

This is the sudden, unexpected illness, where the dog is very poorly and may even collapse. These dogs often require aggressive treatment, including hospitalization and intravenous fluids.

This is the rumbly-grumbly version of pancreatitis where the dog is vaguely unwell over a long period of time. These dogs can usually be nursed at home.

What Are the Symptoms of Pancreatitis in Dogs?

Think of the signs of pancreatitis in dogs on a sliding scale.

At the bottom end of the scale, you have a dull dog that loses interest in food and is a bit sick. This may pass in a day or two.

In the middle is the dog who is restless (due to stomachache), has diarrhea and repeatedly vomits. This may pass quickly or grumble on for days.

At the top end of the scale is the distressed dog with a hard, painful abdomen.

This dog can’t keep fluids down, has severe diarrhea and labored breathing. They may also be feverish and even collapse.

What Causes Pancreatitis in Dogs?

Pancreatitis isn’t an infection and not something dogs “catch.”

The symptoms are caused by digestive juices leaking out of the pancreas.

So the question to ponder is: What causes the pancreas to become leaky?

There are several answers in the form of risk factors.

The three biggies are:

A dog doesn’t need all three risks in place to get pancreatitis. For example, a lean dog on a healthy diet can still develop pancreatitis, especially if she’s a breed prone to this condition.

Looking at things the other way round, if your dog is genetically inclined toward pancreatitis, over-feeding with fatty foods increases the odds.

In the real world, this means an overweight Cocker spaniel that steals fatty sausages off a barbecue grill checks all the boxes for a pancreatitis flare-up.

In addition, a paper in JAVMA analyzed 100 cases of severe pancreatitis in dogs and found the following trends: 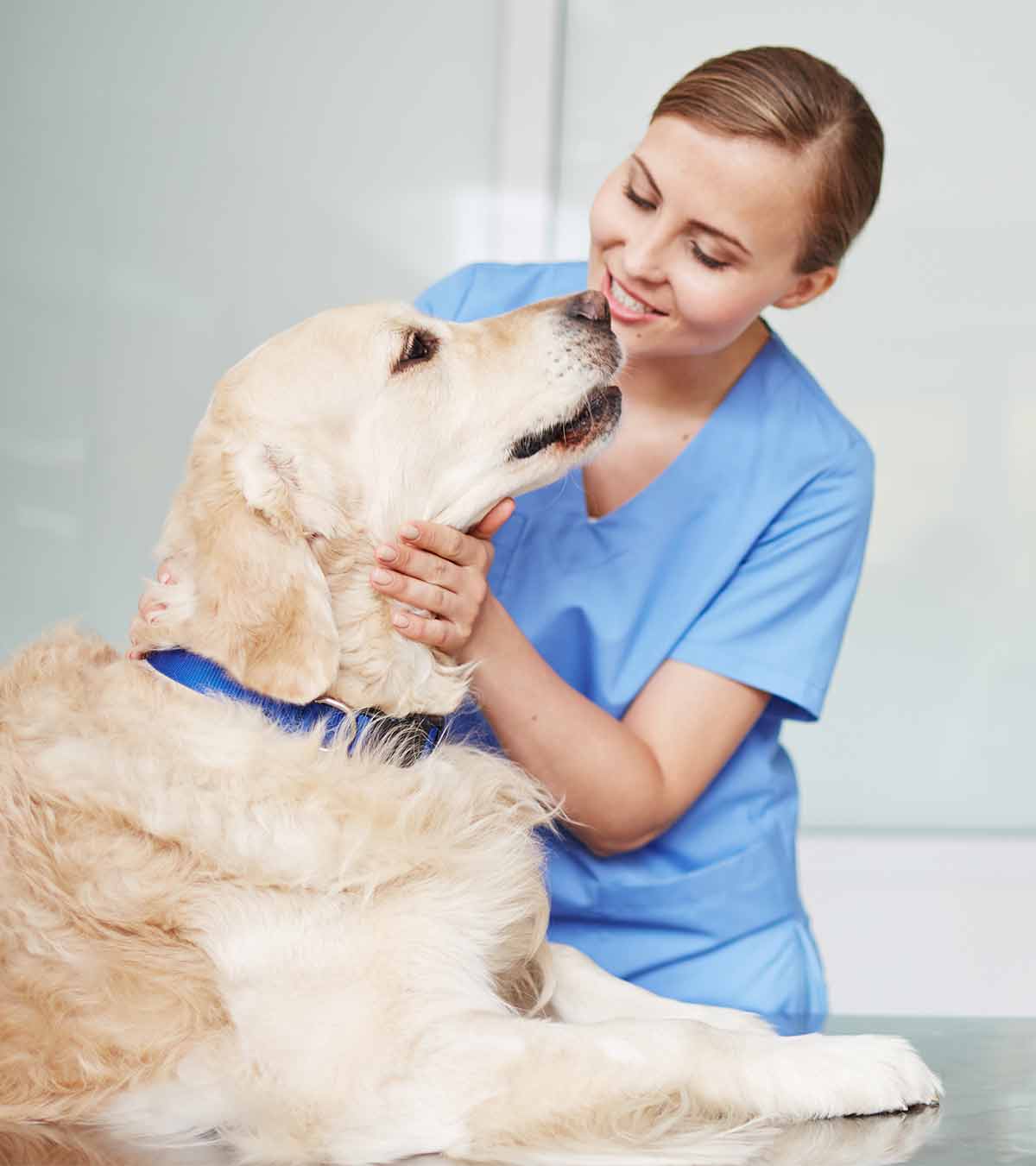 How Do Vets Test for Pancreatitis in Dogs?

First, the vet takes a history and examines the dog. A painful abdomen, especially at the front of the tummy, and a raised temperature are “smoking guns” in the pancreatitis world.

Tests are then required to rule out of other causes of pain and confirm suspicions.

To test for pancreatitis in dogs, a kennel-side blood test gives a simple Yes/No answer. But whereas a “no” result makes pancreatitis unlikely, a “yes” vote can mean yes or be a false positive.

To clear up confusion, the vet may send positive tests off to the lab for confirmation.
This more complex test measures inflammatory markers to give a definitive answer.

In addition, the vet may scan or radiograph the dog’s abdomen, looking for more clues.

Treatment targets are managing the pain, reducing sickness and preventing dehydration. How to treat pancreatitis in dogs depends on how poorly the dog is.

Mild cases can be cared for at home, but for acute pancreatitis the dog needs hospitalization.

There’s a strong link between fat and pancreatitis in dogs. Feed her low-fat food to reduce a major risk factor.

Prescription foods such as Hills I/D or Purina EN contain small quantities of high-quality fat and are frequently recommended by vets for dogs prone to pancreatitis.

How Long Can a Dog Live with Pancreatitis?

How long is a piece of string?

With regard to dog pancreatitis prognosis, there’s no easy answer. Just as there’s a sliding scale of severity, recovery times vary widely too.

Acute pancreatitis in dogs can indeed be life-threatening, and a serious episode takes weeks to recover from. Whilst with chronic pancreatitis the signs may wax and wane, but the dog is largely able to lead a normal life.

Special Cases of Pancreatitis in Dogs

Dogs inherit health problems, such as hip dysplasia, from their parents. They can also inherit a weakness for pancreatitis.

A big part of prevention is keeping your dog slim and feeding her a healthy diet. If the dog belongs to an at-risk group, there’s also a strong argument for feeding her low-fat foods.

Diet aside, vets are largely left scratching their heads about how to prevent pancreatitis. Whereas pancreatic enzyme supplements are used to help people (it rests the pancreas), the same doesn’t hold true for dogs.

And whereas steroids are commonly prescribed for people with pancreatitis, this is controversial in dogs and rarely done.

Pancreatitis in dogs is a common condition, often triggered by fatty foods, which can mimic a stomach bug. However, pancreatitis can be serious, so if a dog is off her food, vomiting and seems unwell, always seek veterinary advice.

Is My Labrador Too Thin?

Why Do Dogs Eat Grass And Is Eating Grass Bad For Them? 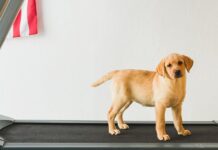 Dog Exercise: How To Exercise Your Labrador And Keep Them Fit