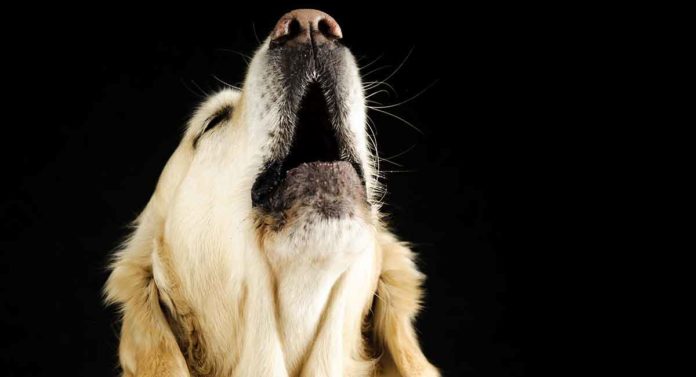 Dealing with a barking dog can be frustrating. And for many people thinking about which dog to bring into their lives, barking is a major factor to consider.

This begs the question “do Labrador Retrievers bark a lot?”

In this article, we’ll answer this important question in detail.

We’ll look at how common Labrador barking is, and common causes in puppies and adult dogs.

And what you can do if your Lab gets a case of the nonstop barks.

Lab Dog Barking: How Big an Issue Is It?

Let’s start with the good news.

The answer to the question “do Labrador Retrievers bark a lot?” is an emphatic no.

Labs were bred to be gentle, easily socialized dogs. With the right training and reinforcement, Labrador Retriever barking is not a big issue.

However, all dogs naturally vocalize.

Barking, growling, whining, sighing and that weird snuffling are all part of a typical canine’s vocabulary.

So, while Labs aren’t particularly troublesome in the bark department, Labrador barking problems can still occur.

When this happens, the key is to think of barking as communication rather than just an annoying noise.

Of course this is easier said than done.

But if you can understand the cause of Labrador dog barking, the solution will usually become obvious too.

It’s useful when looking at barking issues to separate puppies from adult dogs.

They generally bark for very different reasons, and they need to be addressed with different strategies.

The first few months of any puppy’s life is going to be filled with new things to learn.

When a puppy is very little, it will need a lot of attention.

And it’s going to tell you when it feels lonely, scared or bored.

The vast majority of Lab puppy barking is a result of separation anxiety (especially in the three-to-six month range where they’re assimilating huge amounts of information about the world).

During this period, you’re going to have to walk something of a balancing act. It’s important not to reward your puppy with your company every time she barks.

At the same time, in those first few months it’s equally important to be around a great deal.

Studies suggest that the greatest factor in your Labrador retriever’s happiness, adjustability and sociability is her relationship with you, its owner.

So, while you’ll need to be careful not to reward barking, investing in that relationship will be key to bringing up a well-adjusted pup.

In some ways the question “do Labradors bark a lot?” is a little bit like asking if humans complain a lot. The answer depends on what’s happening.

Like any creature, if a Labrador retriever feels neglected or ignored, she’s likely to do something about it. Instinctively, that something usually involves making noise.

If a dog is barking because she feels bored and neglected, you’re likely to see other “acting out” behavior.

Again, your answer to attention-demanding Labrador dog barking is a balancing act.

On the one hand, an important part of fixing this situation is making sure your dog is happy.

If she is bored, make sure she has toys. Also, be sure to find time for plenty of play and pampering.

At the same time, the usual reason attention-barking becomes entrenched is because your clever Lab has figured out that it works.

You can take steps toward reversing this behavior by simply walking away when the “look at me” barking begins.

Barking at night is infuriating, not just for dog owners but for those living nearby.

In one study, barking dogs were ranked as the leading cause of noise at night in a suburban setting.

As a breed, do Labrador retrievers bark a lot at night? No. That gentle temperament means late-night bark fests are not a common problem.

When it does occur, it can be tricky to identify the root cause.

The first thing to rule out is illness, pain or some other old age condition such as dementia.

It’s a very good idea to take your Lab to the vet in order to rule out any underlying health concern.

Another possibility is that night-time barking becomes a habit, perhaps due to boredom or separation anxiety.

If so, more play and exercise will work wonders and is proven to greatly improve canine temperament and affability. Here’s our guide to keeping your Lab fit and happy.

If the mystery of your late-night Labrador retriever barking persists, you may need to stay up one night to check for disturbances.

No dog worth her salt can resist barking at a cat outside or a mouse in the walls.

To learn more about Labradors barking at night and strategies to deal with it, here’s another great resource for you to read.

Do Labrador Retrievers Bark a Lot Out of Aggression?

Many potential dog owners are particularly concerned about aggressive barking.

The great news is Labradors are one of the least aggressive dog breeds.

That said, any animal is likely to vocalize and act out when placed into a situation where they feel fear.

When it comes to Labrador barking problems that are fear and based on aggression, there are three steps you can take to helping your buddy quiet down.

First, make an effort to understand the fear.

If a Lab is fearful of another dog or of a stranger, you’ll get better results if you can remove your Lab from the situation rather than focus on stopping the barking.

Once you know the trigger, you can slowly reduce anxiety levels by gradually introducing your dog to those situations.

Second, and this is a tough one, it’s especially important to manage your own response.

Dogs are great at reading their owner’s emotions. If you’re angry and upset it’ll only contribute to the situation.

Finally, if the aggressive barking is a result of frustration, it can be helpful to channel your Lab’s emotions and energy elsewhere.

Chew toys and tug toys are a useful way to help your dog divert her energy away from barking and toward play.

While Labrador dog barking can happen, generally the Lab’s gentle nature and desire to please means that it can easily be resolved.

The first step in resolving the issue is to understand what your Lab is trying to tell you.

We hope this guide has been helpful.