An f1 Labradoodle has one pedigree Labrador Retriever parent, and one pedigree Poodle parent. Their looks, personality and health are a lottery of traits from each parent, but since their parents have a lot in common, the results aren’t too wildly unpredictable. F1 Labradoodle dogs are affectionate, intelligent, loyal and active. They weigh 40 to 80 lbs and live for around 13 years. Today we share a complete introduction to the F1 Labradoodle. We’ll unravel the language we use to describe different generations of mixed breed dogs, and find out what you can expect from an F1 cross between a Labrador and Poodle as a pet.

This Labradoodle puppy is playing in a way that only a puppy can. Let’s get to know them better.

What does f1 Labradoodle mean?

Labradoodles are a cultural phenomenon. The first intentional Lab and Poodle mix dogs were bred in the 1990s as low shedding candidates for service work. At that time, mixed breed dogs were regarded with disdain by many people. Which made it difficult to rehome the puppies that weren’t cut out for working roles. The name ‘Labradoodle’ was coined as a way to make them more appealing to pet owners. And the rest, as they say, is history. Now almost everyone is familiar with what a Labradoodle is, and they have paved the way for dozens of other designer dogs too. But fewer people are acquainted with the filial numbering system for mixed breed dogs.

Put simply, an f1 generation Labradoodle has one pedigree Labrador parent, and one pedigree Poodle parent. The ‘f’ stands for ‘filial’, a word to describe the relationship between parents and their offspring. The number 1 describes how many generations removed a puppy is from their closest purebred ancestor. F1 Labradoodles are one generation apart from a purebred dog. To understand the significance of that a bit more, let’s take a quick look at other common types of Labradoodles.

What’s the difference between f1 and f2 Labradoodle puppies?

Breeders usually specify that their litter is an f1 generation in order to distinguish it from different filial generations. For example

What is a standard f1 Labradoodle?

Labradoodles are one of the best known ‘teddy bear’ dog breeds. Rather than being kept in any of the elaborate show clips associated with pedigree poodles, their coat is usually kept at a single length all over, known as a puppy clip.

In f1 Labradoodles the Poodle’s curly coat genes usually win out over the Labrador’s straight coat genes, but there is lots of scope for variation in coat type. Furthermore, lots of owners report f1 Labradoodle coat changes as their puppy grows up. Firstly, the length, softness, and texture can change when their adult coat replaces their puppy coat. This process starts at about 6 months old, and can take several weeks or even months. Secondly, their color can change over time if they inherit the progressive greying gene from their Poodle parent. If they inherit the sable gene from their Poodle parent, their coat will also be a different color depending on whether they’re kept clipped or unclipped.

Labrador Poodle mix dogs can have a tall and leggy silhouette like a Poodle, or be more long and sturdy-looking like a Labrador. Unlike Poodles, but in common with Labradors, their tails are rarely docked. Labradoodle dogs have floppy, v-shaped ears because both of their parents do, but their muzzle can be wider or narrower depending on whether they take after a Labrador or a Poodle more.

How big is a full grown f1 Labradoodle?

Th adult size of a Poodle Lab mix dog depends upon things like:

In both Labs and Standard Poodles, male dogs are frequently bigger than females, so the same is true of a standard f1 Labradoodle. Females typically reach between 40 and 70lbs, and males weigh 60 to 80lbs. Within each sex class, things like the exact size of a puppy’s parents and whether their Lab parent was of working or show type will influence their adult size. Working type Labs are usually leaner and lighter, whilst show Labs are usually stockier and heavier – and they can pass this onto their puppies.

One of Labradoodle dogs’ most desirable traits is their low- or non-shedding coat. Generally, the Poodle’s curly, non-shedding coat type is genetically dominant over the Labrador’s short, shedding fur. This means most f1 Labradoodles shed significantly less than a purebred Lab. But, this is not guaranteed, and exactly how much less they shed does vary. Moreover, a non-shedding coat does not mean that a Labradoodle mix (or even a purebred Poodle for that matter) is hypoallergenic. The proteins which trigger people’s allergies to dogs are produced in their saliva, sweat and urine. So despite persistent myths to the contrary, there’s no evidence that any dog can be truly described as hypoallergenic.

Labradors and Poodles are both lively, energetic and intelligent dogs. In fact, they both started out as working gundogs, bred to spend long and physically arduous days retrieving shot waterfowl and returning it to their handler. Since a lot of those unlucky birds fell in water, Labs and Poodles were also favored by duck hunters for their natural love of swimming.

With this heritage, Labradoodles are likely to pick up new commands quickly and easily, especially if their Labrador parent came from working lines. If they have lots of working dogs in their family tree, they are likely to crave the mental stimulation of having a ‘job’ to do as well. Which means training can’t stop with the basics. They benefit from activities like gundog training, agility, or canine freestyle to stretch their mental muscles as well as their physical ones. Speaking of physical muscle, Labradoodle dogs need at least 2 hours of outdoor activity every day, which can including walking on or off leash, or swimming. Exercise isn’t just good for their physical condition either: adequate exercise contributes to lower aggression, fear and separation anxiety.

Just like everything else, first generation Labradoodle health is a mixed inheritance from both of their parents. Labradors and Poodles share a genetic predisposition to some health problems, such as hip dysplasia and elbow dysplasia. But they also both carry some recessive genetic conditions that the other does not. This is significant to Labradoodles because recessive diseases only affect puppies who inherit the faulty genes that cause them from both parents. So mixed breed dogs tend to be protected, if only one parent breed carries the faulty gene. Examples of recessive genetic diseases in Labs and Poodles that f1 Labradoodles are usually protected from include exercise induced collapse, and sebaceous adenitis.

F1 Labradoodles are also susceptible to the acquired (i.e. not genetic) health problems of Labs and Poodles, including obesity and ear infections. You can protect your dog from these by making smart lifestyle choices, such as measuring food out accurately, and drying their ears after they go swimming.

Labradors and Standard Poodles typically live for approximately 12 years, so a standard F1 Labradoodle will be about the same. On average, mixed breed dogs live for 2 years longer than pedigree dogs, thanks to factors like the protection from some hereditary diseases described above. But, this extra lifespan is a population average – it’s impossible to say whether it will definitely apply to any single individual. Miniature Poodles live nearly 14 years on average, so this extra life expectancy might also be seen in mini f1 and mini f1b Labradoodle dogs.

Labradoodles have taken the world by storm, because they have the potential to be fantastic pets in the right households. Whilst they’re not hypoallergenic after all, they do usually shed less than a Lab, which means less vacuuming and removing hair from clothes and furniture. Labs and Poodles are both affectionate with their human family, and patient with younger family members. However, the Poodle tends to be less interested in unfamiliar people and dogs than the Labrador, and an f1 Labradoodle could go one way or the other. Careful socialization as a puppy can help make sure that disinterest doesn’t turn into fear. But, if you’re relying on your dog having lots of social confidence in new situations, then a purebred Lab might be a more suitable, reliable choice.

Labradoodles are best suited to active households, with plenty of time for exercise and training. Dog owners are more likely to be dissatisfied with their dog, or regret bringing them home, if their dog is aggressive or misbehaved, or they underestimated how much they were going to cost to keep. Proper, careful socializing before 12 weeks old, consistent daily commitment to obedience training, and being realistic about the ongoing costs of looking after your dog will help you avoid these pitfalls.

It’s very easy to find f1 Labradoodle puppies all over the world, simply by searching online. But in many ways, f1 Labradoodles have become victims of their own success. They are so widely sought after that they have become a popular dog with puppy farmers. Puppies from puppy farmers are more likely to have hereditary health problems which need expensive long term veterinary treatment. They are also more likely to have behavioral problems. Even though it can be very tempting to ‘rescue’ a puppy from a puppy farm environment, the proprietor will simply replenish their stock by breeding more puppies. So it’s important to avoid bad breeders altogether. This article will show you how.

To maximise the chances of bringing home a healthy, confident little puppy, look for a breeder who can provide evidence that their litter’s parents were both tested for

Good breeders will have lots of questions about you, your household, your lifestyle, and what you expect life with a Labradoodle to be like. Some breeders say they will only offer a puppy to a family after they’ve tried their hardest to talk them out of it first! This isn’t because they don’t want you to have a dog. It’s because they want to make sure you’re getting the right dog at the right time, and you won’t regret your commitment. Finally, good breeders also have a waiting list, so expect to wait a while for your puppy to be ready.

An f1 Labradoodle mix is a first generation cross between a Labrador and a Poodle. They are are usually easy to train and devoted companions. But they need a lot of exercise and training, so it’s important to be realistic about whether you’re ready for such a big commitment. Contrary to the popular myth, they are not hypoallergenic. For more resources to help you raise a new f1 Labradoodle puppy, take a look at the following pages: 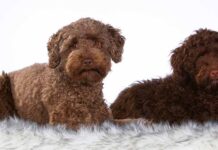 What Smell Do Dogs Hate to Pee On?