This complete guide to the f2 Labradoodle unravels the terminology used to describe mixed breed dogs, and explains why it’s relevant to choosing your next pet.

An f2 Labradoodle has two first generation Labradoodle parents, and a Lab and a Poodle grandparent on each side. There are pros and cons to buying or adopting an f2 Labradoodle puppy, but they have the potential to be great pets in the right homes.

A Labradoodle can be the best of a Labrador and a Poodle. But there’s nothing to stop them inheriting the traits you’d rather they didn’t have too. Let’s see how that can play out in the f2 generation.

What is an f2 Labradoodle?

F2 Labradoodles have two f1 Labrador parents, and those parents each have one Labrador Retriever parent and one Poodle parent. In other words, an f2 dog has mixed breed parents, but four pedigree grandparents. Each f1 parent passes on 50% of their DNA to their f2 offspring, selected at random. This means an f2 dog’s genetic inheritance has more potential for variation than the f1 generation (which is always 50% Lab and 50% Poodle).

In fact, in theory an f2 Labradoodle could even end up inheriting 100% Labrador or 100% Poodle DNA again. But statistically most will still be close to 50% Labrador and 50% Poodle, with some outliers receiving significantly more genes from one breed or the other. It’s that potential for genetic variation and non-average outliers that potential puppy buyers need to be aware of.

What does f2 mean?

Before we go any further, how did breeders come up with the designations f1 and f2? What do they actually represent? Well the ‘f’ stands for the word ‘filial’. Filial describes the relationship between parents and their offspring. It shows that we’re describing the connection between different generations of a family tree. And the number describes the number of generations that separate a mixed breed puppy from their most recent purebred ancestor(s). An f2 dog is two generations removed from their Lab and Poodle grandparents.

Mixed breed dogs are always a genetic lottery. We only have an extremely limited ability to predict how some traits will be passed on. Most qualities will be (or at least appear to be) inherited or not inherited from each parent at random. Within the f2 generation, there is also the possibility for puppies to seem surprisingly like a purebred Lab or Poodle again. So it’s generally a good idea to get familiar with both breeds, and prepare yourself for any eventuality!

F2 Poodles can pretty much look like a Lab, a Poodle or anything in between! Some of the possibilities to look out for are:

Unfortunately, whether an f2 Labradoodle’s coat sheds or not, there is no evidence that they are more hypoallergenic than other dog breeds. In fact, the proteins which trigger a reaction in dog-allergic people are found in dogs’ saliva, sweat, and urine, not in their hair. And researchers say that there is no evidence to suggest that any dog breeds are more hypoallergenic than others, even if they don’t shed.

Generally, mixed breed dogs do enjoy a bit of a health benefit from their dual ancestry. They are often protected from recessive genetic diseases, which only manifest if they are inherited from both parents. Relevant examples include

F1 Labradoodle are generally protected from suffering either of these conditions. However, some of this protection is lost in the f2 generation, since these genes can still be carried silently by the f1 generation and passed on to an f2 litter from both sides.

Overall, f2 Labradoodle health possibilities to be aware of include:

Like Labradors and Poodles, Labradoodles can expect to live for 12 to 13 years on average. On average they might even experience a little lifespan boost thanks to their mixed breed ancestry. But it’s impossible to predict or confirm this at an individual level.

Labradoodles are popular because people love the idea of a non-shedding dog with a Lab’s temperament. But do you know what? Poodles have great personalities too! In fact it’s not even that dissimilar to a Labrador’s. Both dogs were originally bred to retrieve game for duck hunters. They are energetic, intelligent, relatively easy to train, and very people-focussed. An f2 Labradoodle is certain to be all of these things as well.

Where Labs and Poodles differ is that Poodles tend to be less interested in socializing with other dogs. They might also take a little longer to warm up to new people. And they are more likely to display watchdog behaviors, such as barking at people who approach their home. An f2 Labradoodle could also inherit these qualities. To make sure your puppy is a good match for you, it’s a good idea to have a proper chat with an f2 Labradoodle breeder. Ask about the temperament of their puppies’ parents and grandparents, so you know exactly what kind of traits could be in the mix.

Beside genetics, factors which will affect your f2 Labradoodle’s temperament include:

We’re all familiar with the idea of traits that skip a generation in humans. From hair color or the shape of a smile, to mannerisms or an aptitude for sports. And essentially this possibility is the most significant drawback of f2 Labradoodles compared to f1 Labradoodles too. It’s impossible to say which traits an f1 Labradoodle will pass onto their offspring. There are even some important hidden possibilities, like the faulty sebaceous adenitis gene. This means that if any particular breed-specific trait is important to you, then choosing an f2 Labradoodle puppy is a gamble.

One way round this is to adopt an adult f2 Labradoodle. Once they are older, the combination of traits they have inherited from each side of their family tree becomes more apparent. Since Labradoodles are popular dogs, they tend to wind up in shelters fairly frequently too. For example because their owner was also relying on them inheriting a trait which it turns out they didn’t. Or because their circumstances have changed and they’re unable to keep looking after them.

If you’ve resolved to buy an f2 Labradoodle puppy, take your time finding a high quality breeder. It can be (very) hard to pass by opportunities to buy from low quality breeders, but a good puppy is worth the wait! Due to their popularity, Labradoodles have become a common target of puppy farmers. But puppies from puppy farms are more likely to have expensive and distressing health problems, or long term behavioral problems like fear aggression.

Is an f2 Labradoodle right for me?

F2 Labradoodles combine two popular pedigree dog breeds. They’re well suited to active households who have plenty of time to interact with, train, and exercise with their dog. Their success in the past depended upon an enthusiasm to spend time with people, working on a task together. So it’s impossible to simply withdraw that level of engagement or activity now, and expect them to thrive. They’re a big time commitment.

Before committing to an f2 Labradoodle, it’s a good idea to think about what it is that appeals to you about them. And then check whether that quality is guaranteed! For example if a non-shedding coat is a top priority, then this mix isn’t for you. But a pedigree Poodle, F1b Labradoodle, or multigen Labradoodle might be. If you have previous experience of Labs and Poodles, or other types of gundog, and you’re not too picky about the details, then you might enjoy the journey and unpredictability of getting to know an f2 Labradoodle.

Do you have an f2 Labradoodle? 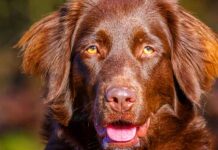