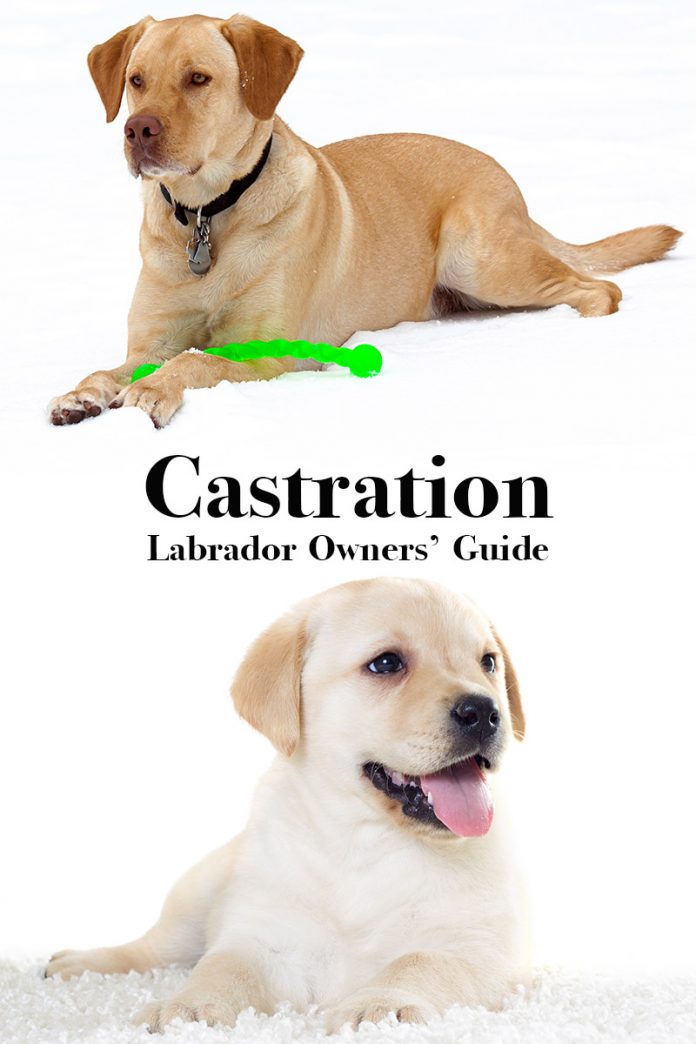 Having your male Labrador castrated is a common choice. Many vets recommend you have this procedure carried out on your pet at a young age. But should you do it? And what exactly is involved?

This article answers a range of questions on dog castration, including the pros and cons of Labrador castration, and what you can expect to happen afterwards. We look at the costs of castration, what is involved in castrating a dog, the recovery time, and there’s even a dog castration video for you to watch if you want to. And most importantly, we also consider the potential effects of castration on the long term health of your Labrador. Including a look at both the benefits of castration and the disadvantages.

Castrating your dog may change him in ways you do not expect,  and may not change him at all in ways that you do expect. People often hope and expect that their male dog will be easier to manage after castration. And they may be disappointed.

Many of the changes that sometimes occur after castration, only occur with about half of all castrated dogs. The success rate of castration in curing a whole range of perceived problems is not very impressive. Here are some of the things that might happen if you have your male dog castrated:

Does castration change a dog’s appearance?

Castrating a male dog at a young age does have an impact on appearance If you have your dog castrated before he is mature,  he is unlikely to develop in quite the same way as an uncastrated male. He may in fact look a little ‘feminine’. He may also grow a little taller than he would have if you had left him intact. This is because castration removes some of the hormones involved in telling your dog to stop growing.

Constant piddling, ie cocking his leg every five minutes, may be reduced, and probably is in about half of castrated dogs, but there are no guarantees. Bouncy, lively, and generally boisterous behavior is unlikely to be reduced as a result of castration. Boisterous adolescence is normal.  Labradors may become calmer as they mature, but don’t assume this is down to castration.

Roaming is one behavior that is significantly improved after castration, because roaming tends to be powered by the testosterone fuelled drive to procreate. However, roaming is also preventable by secure fencing. Obviously if your garden is the size of a football pitch that could work out expensive,  in this case a smaller enclosure for your dog might be an alternative solution.

Aggression towards people, often based on ‘fear’,  is unlikely to be relieved by castration. If your dog has this problem you need to seek help from an experienced behaviorist. Your vet should be able to recommend one.

Vets used to believe that castration made dogs less aggressive towards other dogs, but recent studies suggest that the opposite is true. Castrated dogs may in fact be more likely to be aggressive or have behavior problems than other dogs. This is probably because testosterone is a confidence boosting hormone and when your dog is castrated his testosterone production is turned off.

In conclusion, if your dog is aggressive, seek advice from your vet and a reputable behaviorist before lopping off his balls! It might not help, and it could make things worse.

What are the health benefits of castrating a Labrador?

Vets are often quick to point out the health benefits of castration.  These include removing the risk of testicular cancer. A risk of which is actually fairly small in dogs. And the reduction in prostate problems (not cancers) in older dogs.

What are the health risks of castrating your dog

For the sake of balance,  it is worth taking some time to consider the potential health problems that have now been associated with this procedure. Some recent studies have shown that castration  increases both the risk of some cancers in male dogs, and of joint problems such as hip dysplasia and cruciate ligament disease.

A study of heart tumours in 1380 dogs showed that the risk of developing such tumours was increased for castrated males. In a study of golden retrievers in 2013 castrated males were shown to have 3 times the incidence of lymphosarcoma compared with males that had not been castrated. And were twice as likely to be diagnosed with hip dysplasia

A study of Hungarian Vizslas also concluded that the risks of some cancers were higher in dogs that have been castrated A recent study also showed an association between epilepsy and castration.  Though this relationship is not necessarily a ‘causal’  one,  it is food for thought. A recent (2013) study looked at the outcome of neutering on 40,000 dogs. The findings are interesting and may find it helpful in deciding whether or not to go ahead with neutering.

The social benefits of castrating your dog

One of the benefits to castrating a dog is particularly relevant to dog owners that work full time. Many doggy day care centres or dog creches simply won’t accept an adult male dog that has not been castrated. For these people, castration is not optional, it’s just something that they have to do. The same applies to those who live in states or countries where castration is a legal requirement for all male dog owners.

Surgical castration is a relatively simple operation taking a matter of minutes.  If you would like to know exactly what is involved, the video explains the procedure perfectly.

WARNING: the following video contains footage of a surgical operation that some viewers might find upsetting

Castration is a relatively minor operation but there is still some recovery time involved, and a bit of post-operative care.

Because castration is carried out under a full general anaesthetic, your dog may still be a little woozy when you collect him from your vet. He’ll need to be left to sleep it off in a quiet place for the next few hours. Your veterinarian will give you full instructions as to when and what he can eat or drink after surgery.

Your dog will have a small wound with a couple of stitches in which you’ll need to keep an eye on, and report back to your vet if it looks sore or infected. He may need to wear a ‘cone’ on his head to stop him chewing on his stitches.

What happens after castration?

Outdoors, you’ll probably need to keep your Labrador on a lead for a few days and to keep the operation site clean – so no lying in muddy puddles! He’ll need to go back to the vet for a check up after a few days.

If your dog has been castrated as an adult you will also need to consider that he will not be infertile immediately. Most vets recommend you assume your dog can still produce puppies up to four weeks after surgery.

If you don’t like the idea  of your dog undergoing a surgical procedure, or would like to see what the effects of neutering are on your dog before making a permanent decision, you may be interested in chemical castration for dogs.

What does dog castration cost?

The costs of dog castration surgery are not usually covered by pet insurance so this is something you will need to pay for yourself. It is a minor operation but includes the anaesthetic, vet teams time etc, so don’t expect much change from $200  (or £100 in the UK)  from a private vet. Check with your vet, and don’t be afraid to shop around for a better quote if your vet seems expensive.

Should I castrate my dog?

Obviously castrating a dog will render him infertile (though not immediately)  which may be very important to you if you own or are intending to own an entire female dog. If you have a male dog and a female,  neutering the dog is probably the least invasive option. If your dog is an only dog,  and your property is secure,  it is not a straightforward decision as there are both benefits and disadvantages to the dog.

Labradors as a breed are particularly susceptible to joint problems, and there is a significantly increased risk of these arising in a castrated male. Together with a higher risk of some forms of cancer, so this is something you need to consider.

As you can see, castrating your  dog is not necessarily the best thing for him, it depends very much on what you are trying to achieve. Talk to your vet,  get a second opinion if you are still not sure, take some time to do your research and you  will be able to  make the right decision for your dog.

Have you noticed benefits or disadvantages to castrating your dog?  Share your thoughts in the comments box below. Here are some more articles you may find helpful in making your decision.