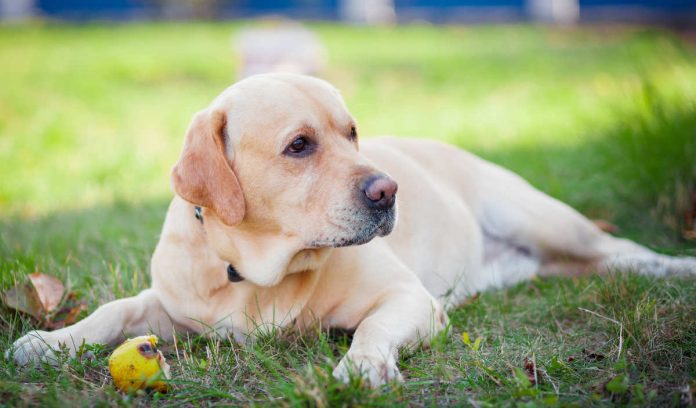 Many Labradors love being groomed. They stand in a blissful trance whilst you run a brush in long firms strokes along their body. Equally, some Labradors hate it. In this article we are going to give you a clear step by step guide to grooming a Labrador who hates being brushed. Helping your dog to learn to enjoy his grooming sessions.

Labradors who hate being brushed

They wriggle and squirm, or look worried like the lovely boy pictured. Or even hide when they see the brush come out. Usually this is because they haven’t been brushed frequently from puppyhood, after all, Labradors have such an easy coat that you might not think about brushing them for weeks on end. Sometimes fear of brushing arises because the dog  has inadvertently associated brushing with an unpleasant event.  Perhaps something that happened coincidentally at the same time.

Whatever the reason, grooming is a great help when it comes to removing dead hair from your dog’s coat. 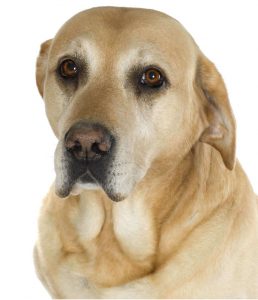 It’s also a nice way to spend some time with your dog on a regular basis. And a good time as he gets older, to check him over for lumps and bumps. So if your dog hides under the table when you get out his brush, then you might want to take action. And the cure is easier than you might think.

Getting ready for grooming

Which brush should I use for my Labrador?

If your dog is very frightened of his brush, it might be a good idea to start with a new and different brush. Use a soft bristle body brush for this process, not a rake or comb. These are both useful tools in general for grooming, but because they are harder they are more likely to worry a nervous dog.

The process of getting your dog used to being brushed means passing through a series of steps or milestones where you get him used to increasing proximity and eventually contact, with the brush. You’ll need to work on this in sessions, each of which takes a few minutes of your time.  If you like, you can do several sessions each day, with a couple of hours break in between.

It may take you several days to complete the process, depending on how much your dog hates the brush!

How to get your dog used to being groomed

Each time you carry out one of the actions described in the steps below, watch the dog. If he does not look without worried, or try to move away, immediately say ‘Good’ and give him a treat from your pot. If the dog looks worried or tries to move away, give him several treats without involving the brush and end the session. Then go back to an easier step the next time.

Have about 20 tiny treats in your pot. Start each session by saying ‘good’ and giving the dog a treat from the pot. Pause and repeat, then move on to the actions in the steps below.

When to move on to proper grooming

When you are able to complete the action in step one, three times in a row, without your dog being worried, or moving away, you are ready to move on to step two. And so on!

Mark and Reward in Grooming

The letter M in the steps below stands for ‘mark’  as in marking the behaviour you want, which  is what you are doing with your word ‘good’. The letter R stands for ‘reward’, as  in giving the dog a treat.  So M& R means ‘mark and reward’. It is your reminder to say ‘Good’, and give your dog a treat from the pot.

The steps to grooming your dog

You are now brushing your dog.  And he is happy about it! Once you get to this point you have cracked it.  All you have to do is add a few more strokes each day, and start to extend the areas of the dog’s body that you brush. Don’t rush this part.  Take a week or so to build up to a full body groom.

Don’t forget that every single time you lift the brush and replace it you must use the word good, immediately followed by a treat.  As your grooming sessions get longer, you can treat the dog several times during the process, and eventually drop the word good.

Sometimes, give your dog an extra special treat at the end of a session. He’ll soon come to see grooming as a great way to spend time with you. Here are a few tips and reminders

Using the word ‘Good’ when grooming

The word ‘Good’ tells the dog that remaining where he is whilst you interact with the brush, is the behaviour that gets him the treat. Don’t say the word good if he moves, flinches, or tries to avoid the brush in any way. And don’t give him a treat unless you have said the word good.

Steps 5- 8 have potential for upsetting the dog. If the dog seems at all worried, go back to step 3 and work forwards again, moving towards the dog in much smaller increments. Complete each step successfully 3 times in a row before attempting the next one. Take it one step at a time and you’ll get there.

Published in April 2014, the Happy Puppy Handbook covers every aspect of life with a small puppy. It will help you prepare your home for the new arrival, and get your puppy off to a great start with potty training, socialization and early obedience. You can buy The Happy Puppy Handbook from Amazon by following this link. If you do, The Labrador Site will receive a small commission which is greatly appreciated and won’t affect the cost to you! 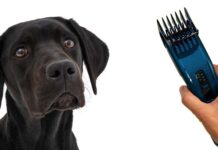 How Often Can You Bathe A Lab? 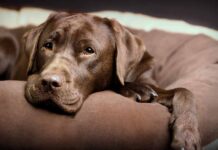 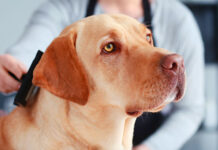 What Grooming Does a Labrador Need? 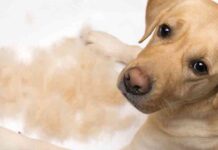