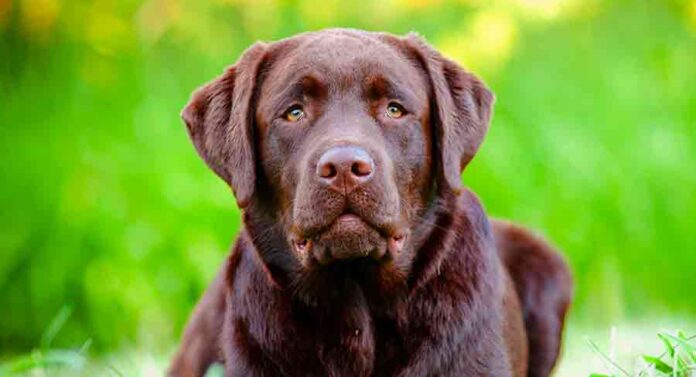 Block head Lab or blockhead Labrador is a term used to describe English or show type Labs with broad, square heads and a distinctively chunky look. We’ll look at why this is significant to Labrador breeding, and how you can ensure your Lab has the block head look, if that’s what’s you want.

The blockhead Labrador Retriever is not without controversy, and we’ll explain why people care so much. And we’ll look at the risks of focussing too much on just one feature of a dog’s appearance too.

What Is A Block Head Lab?

It’s usually English Labradors that are referred to as block head Labs. In this context ‘English Lab’ is a type of Labrador, not a description of where they come from! English Labs are also known as conformation Labs, show Labs, and bench Labs. They are bred to meet the physical ideal described in the Labrador breed standard. The best examples even compete in conformation competitions like the Westminster Dog Show or Crufts.

Both terms describe a distinctive physical feature of Labradors from English breeding lines. Anyone who knows their Labs will grasp your meaning from either. But, block head is the more commonly used term.

Types of Labrador: Which Labs Have Block Heads?

The Labrador breed is broadly divided into two different types. But several different names are used interchangeably to describe each type. Which can make matters confusing to the uninitiated. Here’s how block head Labs fit in:

Labradors bred for their working ability and prowess in field and gundog trials are known as American, working, or field Labs. However, they’re not restricted to America – they are popular all over the world. They tend to be slim and relatively lightly built. Their heads are also a relatively streamlined interpretation of the description given in the Labrador breed standard.

On the other hand, English Labradors are bred to match the physical description in the breed standard as closely as possible. This has resulted in several notable physical differences with the American variety, including broader heads.

So conformation-type English Labs have block heads, and working type American Labs usually do not. But it doesn’t seem like head shape should be connected to working ability  at all! So next let’s see why the wording of the Labrador breed standard has lead to Labs which are described as block headed. And then why American Labs don’t have block heads.

The Labrador Retriever breed standard says that Labs’ heads should be:

It’s easy to see how words like ‘broad’ and ‘powerful’ have resulted in dogs with blockier heads winning more conformation show titles. Besides having broad skulls, they also tend to have slightly shorter muzzles than working dogs, and a more pronounced stop (the angle where the muzzle meets the forehead).

English Labs aren’t only recognizable by their heads though! Other signs that you’re looking at an English Lab are:

Labradors of all types are accepted by the AKC in three standard colors:

Black Labs are the color most closely associated with the working gundog tradition, and that’s true of the blockhead black Lab too. But besides a blockhead English black Lab you can also get a blockhead chocolate Lab, and a blockhead yellow Lab.

How heavy can a blockhead lab be?

It’s important to acknowledge that the American Kennel Club doesn’t officially distinguish between the two types of Labrador. And they don’t have different size ranges for English and American Labradors either.

A typical female Labrador weighs between 55 and 70lbs, whilst most male Labradors weigh between 65 and 80lbs. These ranges cover both types of Lab, but an English Labrador’s weight is more likely to be near the top end of either scale. English Labradors tend to be an inch or two shorter than American Labradors as well, so that the way they carry their weight makes them look more heavily built.

As in any population, some individuals may be natural outliers. Or in other words be heavier than 80lbs. Puppies from big parents are more likely to grow up to be big themselves.

The differences between the two types of Lab exist due to generations of breeders making breeding choices based on slightly different priorities. English Lab breeders look for sires and dams with perfect looks and conformation show titles to continue their breeding lines. American Lab breeders look for dogs with lots of field trial champions in their pedigree.

Because they prioritise working success over perfect resemblance to the breed standard, American Lab appearance has gradually diverged from English Lab appearance over time. One such change is a shift towards more slimline faces with longer, more slender muzzles and a less prominent brow. But both types are still instantly recognizable and equally acceptable as pedigree Labs!

Obviously there is more to a box head Labrador than just their head shape! English Labs are often said to be more calm and placid than American Labs. This is because they don’t need the same degree of energy and stamina that working dogs need to fulfil their purpose. Successful show quality English Labs also need to be rather good at sitting around and waiting patiently for the next thing to happen. And they need to be unfazed by lights, noise, handling and large crowds of people and dogs.

However, the differences between English and American Labs are also, to an extent, just generalizations. Both types belong to the same active, energetic breed, and English Labs should still be capable, competent working dogs. So a blockhead Labrador Retriever can still be bouncy, high-spirited, tireless, and need several hours of exercise a day to wear out! Labradors of both types should be friendly, devoted, and people-focused.

Is An English Blockhead Lab Right For You?

Some people are drawn to a blockhead Lab vs regular (American) Lab because they think they are more impressive to look at. Whilst other people have heard that an English blockhead chocolate Lab will be calmer and more chilled out than a chocolate Lab from working lines, and like the idea of the dog who requires less effort to look after.

English Labradors still need at least two hours of exercise a day, and lots of interaction and mental stimulation. They are best suited to households which have plenty of time for walking, training, and playing games. Adult blockhead Labs are usually described as being patient and affectionate with children, but they can be boisterous and bitey as puppies. All types of Labrador are playful, especially as puppies, so if you have enthusiastic teenagers it can really help with sharing the task of occupying them.

To find big head Labrador dogs for sale, look for breeders who advertise English Labrador or conformation Labrador puppies for sale. The pedigree for each parent may also show several conformation champions. Show champions are identified by the prefix CH before their registered name. The prefix GCH means grand champion!

Beware of breeders who specifically advertise block head Labs for sale rather than English or conformation Labs. This reveals a lack of understanding and knowledge about the breed. It also suggests a preoccupation with breeding exaggerated big head Labrador dogs. In fact, the Labrador breed standard specifically penalizes dogs with overly large heads. It says:

“The skull should be… well developed but without exaggeration. A wedge-shape head… is incorrect, as are massive, cheeky heads.”

The risks of breeding for a single feature

Placing too much emphasis on achieving a block head can also have dangerous repercussions for a dog’s overall health. For example, a naive or unscrupulous breeder who wants to produce puppies with very boxy heads may choose sires and dams based purely on the shape of their head. They might even forego health testing, or ignore poor health test results. They might also choose dogs with poor temperaments. Their puppies might end up looking the way they want, but they could end up with heart breaking or expensive health problems. Or behavioral problems which are difficult to overcome.

Block head Lab is a description applied to Labradors from conformation or show type breeding lines. They are also known as English Labs, although they don’t have to come from England. Block head Labs have broader heads than dogs from working lines, with a shorter muzzle and more pronounced brow bone. Overall, their entire body is broader and stockier too. Block head Labs may be more laid back than working Labs with more streamlined faces, but this is a generalisation which doesn’t always hold true. If you’re looking for a Labrador puppy at the moment, look for breeders who make the health and temperament of the puppies top priority. Walk away from breeders who compromise these things to achieve a particular look instead.