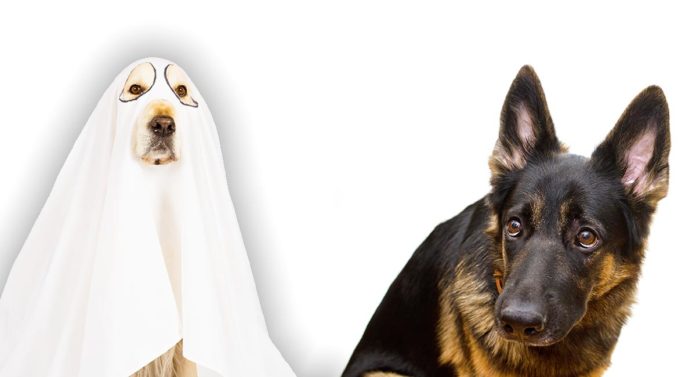 Our dogs have spine-tingling senses and a spooky way of reading our minds when it’s time to visit the vet or groomer.

But can dogs see ghosts?

We devote a lot of time to pondering the inner lives of our pets.

Just to see inside their minds for a minute would be fascinating.

When they start reacting with much noise and excitement to something we can’t see, could it be that your dog saw a ghost?

Whether you’re wondering in jest or in seriousness, in this article we explain what might be happening when it looks like dogs see ghosts.

Dogs have been our loyal companions for thousands of years.

So it’s not surprising that there are lots of superstitions about our canine pals.

In fact people have attributed supernatural powers to them since at least Roman times.

One of the most popular stories about dogs is that when they bark at an empty wall or corner, or into thin air, the dog is seeing a ghost.

Could there possibly be any truth in that? Can dogs see ghosts?

Is My Dog Barking at a Ghost?

In 2013, a Harris poll found that 42 percent of Americans believe in ghosts.

A similar straw poll in the U.K. found that a marginally more skeptic 33 percent of Brits believe in ghosts too.

Here at Happy Puppy HQ, our position is simple: We never write anything that we can’t back up with facts.

Whether we’re writing about food, health, training, or behavior, we find the most up-to-date scientific research to share with you.

What Does Science Have to Say About Dogs and Ghosts?

Here, the evidence (or lack thereof) is conclusive—there is no proof at all of ghosts or paranormal activity.

And these days, that lack of evidence is enough to actually disprove their existence.

Through advances in science, we are now able to detect, quantify, and record changes in energy and matter on the minutest subatomic level.

So if ghosts exist, then we should have no trouble capturing hard evidence of their effect on physical matter around them.

And yet no such evidence exists.

On the other hand, if they are so ephemeral and so beyond the scope of scientific understanding that they somehow don’t affect physical matter around them in a recordable way, then we wouldn’t be able to perceive them either.

The possibility of ghosts is arguably based upon too many contradictions for them to actually be real. They just can’t have it both ways.

How Can Dogs See Ghosts?

So as you’ve probably deduced by now, the answer to “can dogs see ghosts?” is a resounding “no.”

This begs the question: When you see your dog barking at a ghost, what is she really seeing?

One likely explanation is that dogs are not seeing anything—it’s their remarkable ears that are on full alert.

Our pups’ super-sensitive ears can typically pick up any sound frequencies between 67Hz and 45,000Hz.

If that looks like a wide range, that’s because it is.

Humans can only detect frequencies between 64Hz and 23,000Hz—only a third of our dogs’ hearing range.

So when your dog barks uncontrollably at the wall, it could be that something on the other side is making a sound we can’t hear—especially sounds at high pitches.

A great example of these might be a neighbor vacuuming, a distant plane, or a bird singing.

These are a very probable trigger for your dog “barking at a ghost,” particularly if she is a breed with a strong guarding instinct like a Doberman pinscher, German shepherd, or rottweiler.

They simply want to alert you to something you aren’t aware of.

Explanation #2: An Uncanny Sense of Smell

Did you know that dogs have over 220 million olfactory receptors on their nose?

We only have 5 million.

They inhabit a world of aromas that we can’t even imagine, and they gain so much information by it.

So whilst you ask “is my dog seeing a ghost?,” another more likely possibility is that they’ve smelled something they want to draw your attention to instead.

In a way it almost is a ghost of sorts—the ghost of a moment that might have happened hours or even days ago, when an unfamiliar person or dog lingered in that spot awhile.

Better still, they might have caught a whiff of something fun to chase or delicious to eat.

Picking up these traces of scents could especially trigger unexplained barking in dog breeds developed for scent work, like beagles and German pointers.

These pups have an even higher capacity for detecting smells than the rest of their canine brethren.

Explanation #3: They’re Not Sure What They’re Seeing

In 2017, researchers in Sweden found a way to test dogs’ visual acuity compared to humans and found that it was three times poorer.

Of course, that doesn’t bother them, with their remarkable senses of hearing and smell to pick up the sensory slack.

But it does mean that sometimes something that appears completely visually mundane and easy to comprehend to us can really surprise or baffle your dog, especially if there aren’t any other sensory cues to help them make sense of it.

For example, my husband’s childhood dog, a whippet named Bess, simply could not wrap her head around the sight of hot air balloons. They drove her crazy.

Luckily in her case the source of the confusion was clear, and some soothing words and lying down on the sofa were all it took to calm her down.

But it’s easy to see how a less obvious visual puzzle—a moving shadow perhaps that we’d overlook—could cause excitement and create the impression your dog saw a ghost instead.

What to Do When Dogs See Ghosts

Now that we’ve looked at the reasons your dog might be barking into thin air, we can look at how we react to that behavior.

If it’s something that only happens very occasionally and doesn’t upset you or your dog, then it’s unlikely that you need to take any further action.

But if you’d like to discourage it, then take heart because there are ways to distract a dog barking at “ghosts.”

It begins with a little sleuthing. If your dogs see “ghosts” regularly, look for patterns in their behavior.

Does it always happen in the same place or at the same time?

If you turn off other distractions such as a TV, can you make out a sound that might be triggering it?

Don’t worry if you can’t hear or smell what’s causing it. Your dog does have a significant edge on you here after all.

Training Guides for a Dog Barking at Ghosts

Once you’re ready to tackle your dog’s reactions, we’ve got two great training guides to help you get started.

In “Train a Dog Not to Bark,” Pippa Mattinson ooks at the “no bark” or “quiet” cue.

This command is a great way to calm down dogs who react to every little simulus and with practice will work to stop your dog barking at “ghosts.”

If your dog gets upset when she hears or smells something we can’t, you might also need to look at counter conditioning.

Counter conditioning changes the way dogs feel about something that scares them, replacing the feelings of fear with relaxed, happy feelings instead.

Counter conditioning is more complex than introducing a quiet cue, so you might wish to draft in the help of a dog behaviorist to help.

In conclusion, even though our dogs sometimes startle and confuse us with their behavior, they cannot see ghosts.

If they begin barking suddenly, or excitedly sniffing a place that seems completely nondescript to you or I, it’s probably because there’s a smell or sound that they can make out but we can’t.

The explanation, if we could get inside their heads for a moment, would likely be anything but spooky.

And if the behavior becomes annoying, then luckily there is plenty we can do to discourage it.

Do You Think Dogs See Ghosts?

We have a very firm view on the paranormal, but across the country people are divided right down the middle.

Do you believe your dog saw a ghost?

Did you think they saw a ghost, then find a much more ordinary explanation for their behavior?

Whichever perspective you share, join in the debate down below.

Why Do Black Labs Have White On Them?