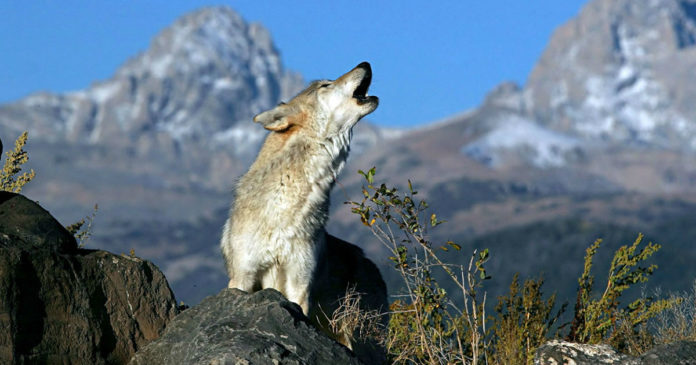 Do wolves bark? It seems like a simple question but is more complicated than you might think. Wolves can, technically, bark. However, this might not be considered the same barking we hear from our more domesticated canines. So what does a wolf bark sound like? And why exactly do they do it? In what ways does it differ from a dog’s bark?

To answer these questions and more, we need to dive into the depths of wolf communication, the evolution of domestic dogs and the “why” behind barking.

Wolves use a wide range of vocalizations to communicate with their companions. This includes action such as growls, whines, yips, whimpers, howls andbarks. A wolf’s voice box is not that biologically different from a dog. They can, just like our furry friends, bark. However, this does not mean that they bark often, just that they physically can bark. However, it is relatively rare to hear a wolf bark.

Barking just doesn’t fulfill the same communication needs for wolves as it does for dogs. To figure out why, let’s look at some forms of wolf communication.

Why Do Wolves Howl?

Vocalizations are extremely important for wolf communication. Each wolf sound has a particular meaning and is used in a specific context. The sound that comes to many people’s minds when they think of wolves is howling. Howling is a very important sound in wolf communication. It is used to gather wolves of the same pack together, mourn lost pack members and claim territory.

Howls can sometimes occur among lone individuals. However, they quickly evolve to include the whole pack. Howls, as well, also allow wolves to communicate across large distances. They can be heard from many miles away, and this helps gather lost pack members and tell wolves of other packs to keep away.

Though howls are a very important type of communication, they are not used as commonly as you might think. Wolves will generally not howl more than once or twice a day. Instead their day is filled with other forms of vocalization.

Why Do Wolves Make Other Sounds?

A wolf’s day is general full of many types of sounds. Whines and whimpers are commonly used in friendly interactions as a way to get the attention of other, friendly wolves. Whines and whimpers, though, can also be used to indicate frustration and anxiety. The meaning is largely dependent on both the situation and body language of the wolf. If a wolf appears to be happy, they are probably whining or whimpering in a friendly manner. But, if they’re acting aggressive or scared, they are probably using it to convey anxiety.

Growls and snarls can be both threatening and defensive. Surprisingly, they use these most commonly among their own pack mates. This is because the social pecking order within a pack is extremely important. Without a clear hierarchy, things just wouldn’t work correctly. Growling and snarling then ensures that every member of the pack knows their place. On top of all of these sounds, wolves can also bark.

Why Do Wolves Bark?

So, why do wolves bark? And why do they not do it as often as our domesticated canines? At the base, a wolf bark is used to express alarm. If a wolf suddenly gets scared or surprised, they might bark. In the same way that we might jump during a scary movie, a wolf might bark when an animal suddenly runs from behind a tree.

Barks are also usually used by mother wolves to communicate with her pups. If the puppy does something he or she isn’t supposed to, or is in danger, the mother wolf might bark to instruct them against the behavior or warn them of the danger.

On top of this, barks are commonly combined with other sounds. A bark-howl, for example, might be used to defend pack territory without intending the warning to be heard a long distance away. If an intruder is spotted a little too close to the den area, for example, a wolf might let out a bark-howl in order to tell the intruder that he or she needs to leave.

A wolf might also combine a whimper and a bark in order to indicate surprise and/or submission. By combining sounds like this, they can add an even greater depth to their communication. 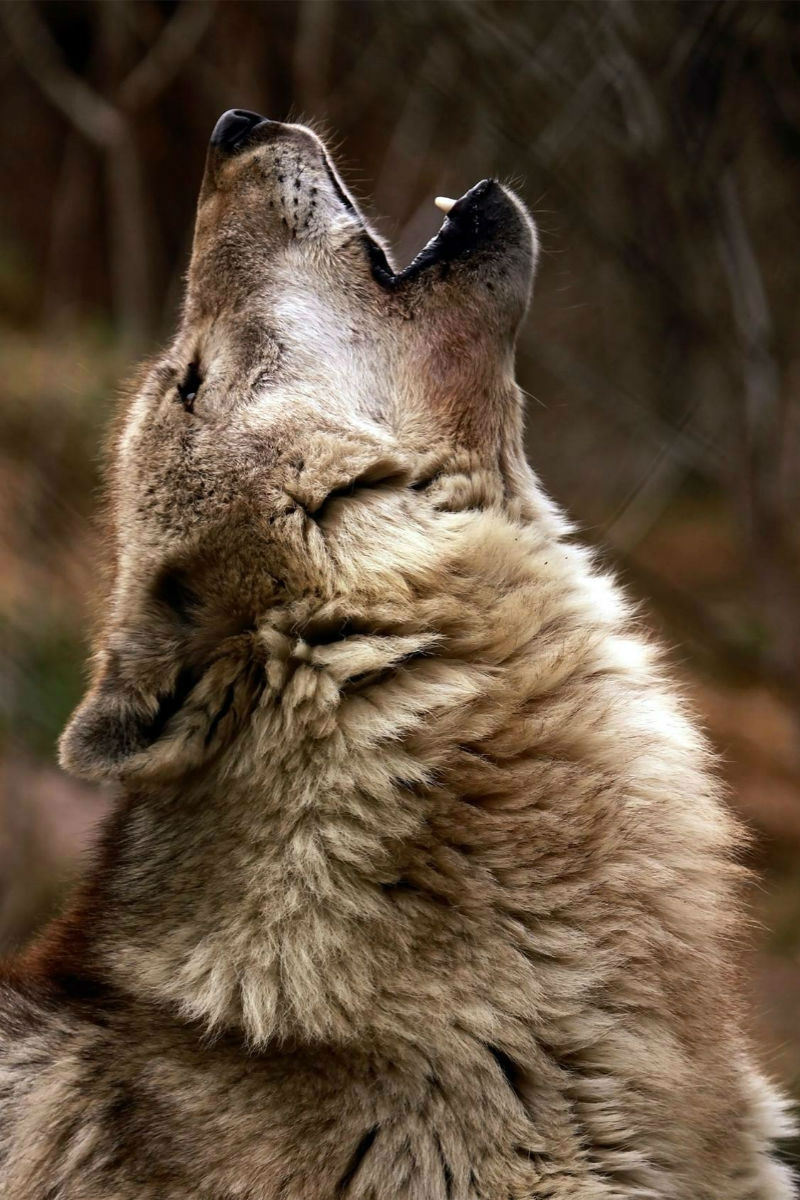 Now that we know why, exactly, a wolf might be barking, let’s explore why a domestic dog might bark. Truthfully, domestic dogs bark for a variety of reasons. Dogs can bark to signal that they want something or that a particular need isn’t met—such as food or water. They use their ability to bark, then, to get your attention so that you will fulfill or help them fulfill their need.

Furthermore, barking might be induced by environmental cues, such as another dog barking or a car horn. Genetics might also play a role in the frequency a dog barks. Some breeds are simply quieter than others. For example, terriers are known to be noisier than other dogs. However, genetics, of course, are not the only reason a dog might bark frequently. Environmental and social factors, such as whether or not the dog has been trained to not bark, also play a major role.

Why Do Dogs Bark At Night?

Barking at night, of course, can be a real annoyance for dog owners. Struggling to keep your dog quiet in the wee hours of the morning can be a real problem. Luckily, there are some things you can do to help your pooch sleep through the night. We’ve left a helpful link at the end of this guide. But for now, back to wolves!

Though both canines do bark, the reasons they bark are very different, as you can see. How did this difference develop? Researchers have discovered that vocalization in many mammals are strongly tied to the social group around them. When thought of in this way, the meaning of different vocalizations might only be learned through teaching at a young age.

This explains why wolf communication is generally stable between one generation to the next. This, of course, is not to diminish the genetic and biological component of vocalization. Wolves and dogs, after all, are biologically capable of barking. Humans, on the other hand, cannot. Vocalization, then, is partially reliant on genetics and partially reliant on the animal’s particular surroundings and social group.

Why Do Wolves Bark Differently From Dogs?

But if communication is pretty stable between generations, why do dogs use barks differently from wolves? The answer lies in the dogs’ social group. Once dogs became domesticated and began living around humans, their social group changed substantially. Humans became their partners, and their communication needs changed because of this. Therefore, dogs had to change their communication pattern in order to communicate efficiently with their new human friends.

The dogs who changed their communication pattern and were able to communicate the best had a better chance of surviving next to humans. In this way, dogs quickly began to understand that humans understood barking the best; it was louder than a whimper and faster than howling.

How Do Dogs Use Barking to Communicate?

Now that we know why dogs use barking more than wolves, let’s explore how exactly this is done. There have been surprisingly few studies surrounding how dogs use barking in their everyday communication. However, there is one study that specifically looks at the specifics of a dog’s bark. This study divided barking into a number of categories by function: social play, play soliciting, exploration, caregiving, social contact and “greeting,” loneliness, and agonistic behaviors.

It was discovered that not only was the bark most commonly used compared to other sounds, but the range of bark tones varied widely. There was a large vocal difference between breeds and individual dogs. This is explained as being largely due to the varying purposes of each dog. Some dogs, after all, were bred to be hunting partners for their human companions, and therefore need to communicate more efficiently while hunting. Toy dogs, on the other hand, do not.

The function and tone of each type of bark, therefore, depends a lot on the specific dog. Truly, each dog communicates differently with his or her human companions. It is also likely that dogs learn how to tune their barks to more efficiently communicate with each specific human.

“The Language of Wolves,” Living With Wolves

Yin, S., 2002, “A New Perspective on Barking in Dogs,” Journal of Comparative Psychology