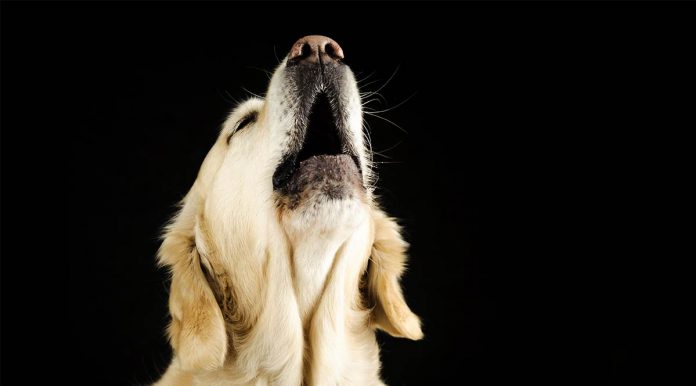 “Is Your Dog Howling” is about the kind of howling that makes your skin tingle and the hair on the back of your neck stand up. We’re going to find out why dogs howl, what dog howling means, and even how to make your dog howl.

Dog howling is a primitive form of communication

We’ve all heard recordings of the amazing howl of the wolf or coyote on wildlife films. It’s kind of haunting and quite beautiful. People are often surprised to hear the very same noise come out of their family pet. I’m not talking about the string of barks that blend together in an over excited dog, or the bay of a hunting hound. The sound of dogs howling is different. Distinctive and rather primeval. You’d be right in thinking that howling dogs are using a primitive form of communication.

So why do some dogs do it? And not others.

Some breeds of dog are more likely to howl than others. Huskies and hounds for example. And within a breed there will be differences too. Labradors are not the breed most likely to howl, but some do. 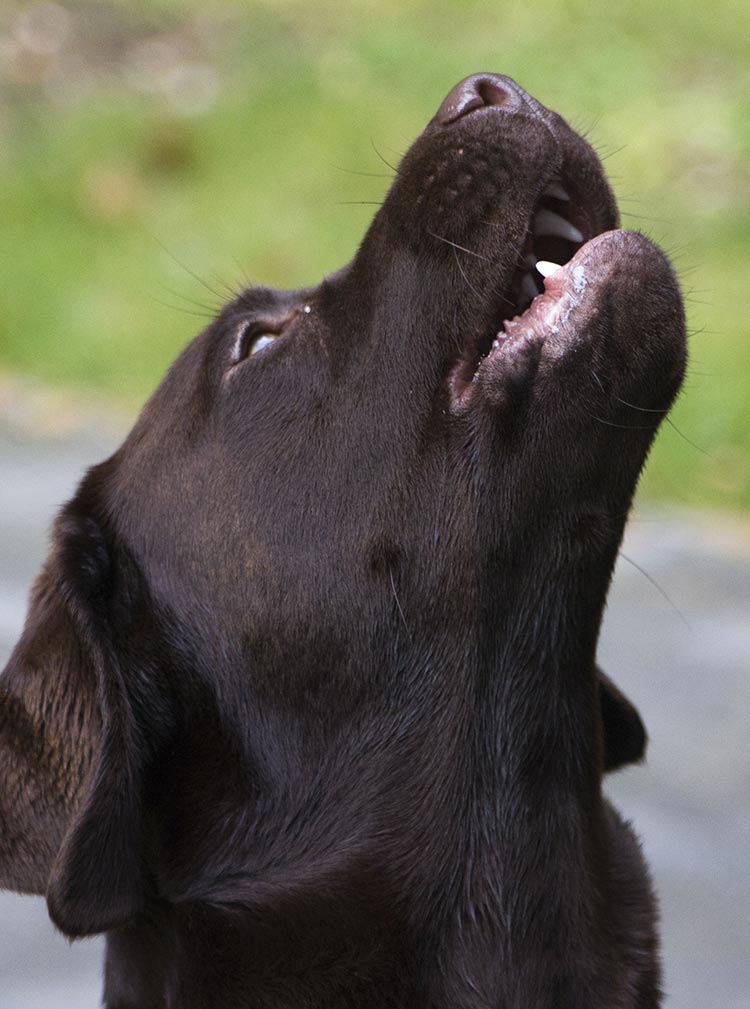 Why do dogs howl at sirens?

I have a wonderful team of working gun dogs, Spaniels and Labrador Retrievers. We live in a small village and the sound of sirens is unusual. But on the occasions when an ambulance or fire engine passes through the village with a siren blaring, my dogs all join in. They sound, for all the world, like a pack of wolves.

It starts with one of the spaniels – she points her little face to the skies and makes her mouth into an O and begins to wail. Ah – ooooooooh, ooo-oooooooh! Quite softly at first, then building to a crescendo. One by one, each of the dogs adds her voice to the others until the siren has long gone (or until I have shouted at them to be quiet!)

I find it spine tingling and actually quite beautiful… but the neighbours may feel differently so I do ask them to stop! My elderly Lab occasionally howls in her sleep, and when she does, all the other dogs join in in exactly the same way. Usually at about 3 o’clock in the morning. The theory is, that the dog recognises the siren as a signal from other dogs not known to him. Perhaps a statement of their presence. And that the dog that howls at sirens is responding with a statement of his own.

We’ll look at that in a bit more detail below in What Does It Mean When A Dog Howls.

Why does my dog howl when I leave him?

Some dogs howl whenever they are left. It is likely that dogs that do this are howling to attempt to recall family members. Or to let them know that they have been abandoned. If a dog doesn’t feel abandoned and is secure in the knowledge that his owner will return in due course, he won’t howl.

Most dogs don’t howl when left, and studies that have been carried out suggest that howling in dogs left alone may be associated with separation anxiety. Like us, most dogs are highly social and derive their sense of security from being part of a family group. Being isolated makes some dogs feel insecure and worried. And unlike you or I, when his family leaves the house, your dog has absolutely no way of knowing for sure, that they are ever coming back.

The dog I spent much of my childhood with, was a beautiful Golden Retriever called Rob Roy. At one point, aged about thirteen, I thought it would be particularly cool if I learned to play the clarinet. The effect of the instrument on my dog was electric. He would throw his head back and sing right along with me, the howls becoming more and more drawn out and enthusiastic as I progressed.

This caused much hilarity from the male members of the family, and plenty of comments about my ability (or lack of it) but my mother grew increasingly concerned that the instrument was hurting the dog’s ears.

Why do dogs howl to music?

There are plenty of YouTube videos of dogs doing the same thing as my Golden Retriever, but why do they do it? Was my mother right – was my dog howling because his ears hurt, or is there some other reason? Let’s have a look.

What does it mean when a dog howls?

Studies in wolves have shown that howls can encode individual and group identities. In other words, dogs can recognise the howls of dogs that they know, and can tell when a howl, is the howl of a strange dog or dogs.

DNA tests show us that dogs are descended from wolves, they are in fact, the same species. And howling is likely to be an instinctive part of that genetic inheritance. The original purpose of this powerful sound is likely to be found in protecting or identifying territorial boundaries, and in keeping the family group safely together.

Howling carries a long way outdoors. My little spaniel throws her head back when she howls because it helps to project the sound even further. In wild canids, this head up projection of a loud howl  is a way of saying “we live here – this is our place”. There is no reason to think that your dog is doing it for any other purpose. In other words by howling, your dog is saying – “this is me, and this is where I am”

When my dog howled at my clarinet, he probably interpreted my playing as me saying “here I am”. He was effectively saying “me too!” My mother’s fears for his ears were probably completely unfounded.

Howling is probably also a good way of keeping members of the group in contact. In puppies for example, howling is a way for a puppy to let a parent dog know the puppy’s location so that he can be found if he gets lost or left behind. 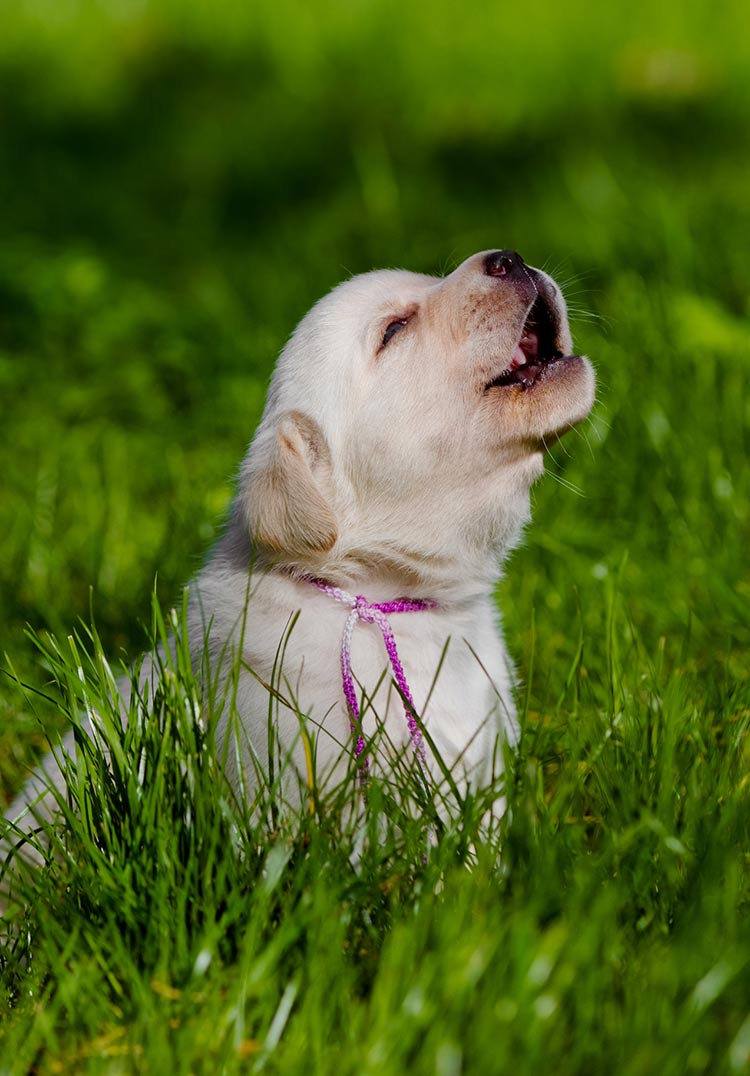 Most new puppies will howl at times if left entirely alone. Many domestic dogs continue to show juvenile traits throughout their lives. And it’s likely that dogs with separation anxiety are showing the same kind of anxiety as an abandoned puppy.

The causes of howling – a summary

How to stop your dog howling

Howling at triggers like sirens and instruments is usually short lived. The dog thinks that the trigger is a territorial cry and is responding with one of his own. You may be able to cut the howling short by teaching your dog to be quiet at a signal from you. Plenty of edible rewards after the cue – “be quiet” – usually works to stop a dog howling. You can’t eat and howl at the same time

Dogs that howl through separation anxiety are like puppies that have never learned that being left alone isn’t dangerous. This type of howling can be treated by getting at the root cause – the dog’s fear of being alone. This means ‘de-sensitising’ your dog to solitude. You can find out more about that in our article on separation anxiety.

How to make your dog howl

Perhaps surprisingly, for those who would like to stop their dogs howling, many people search the internet for ‘how to make your dog howl’. How easy or difficult this is to teach, depends on how readily your dog howls naturally. If you know that sirens make your dog howl for example, then all you need is a recording of a siren.

Choose a cue – you can use any word you like – it doesn’t have to be ‘howl’. Immediately after the cue play your siren recording. And as soon as your dog howls, give him a brilliant reward. Such as a nice lump of juicy chicken. Rinse and repeat, gradually leaving a gap between the cue and the recording, until the dog will begin to howl when he hears the cue, before you play the siren. Once you get to that point you don’t need the recording any more.

That’s all there is to teaching your dog to howl. The tricky part is initiating the howl in the first place. Here are some ideas for making your dog howl:

Does your dog howl?

More information about Labradors and their behavior

The Labrador Handbook looks at all aspects owning a Labrador, through daily care, to health and training at each stage of their life. Including choosing your next puppy and caring for him, right up to life with a senior Lab and all the fun that comes between. 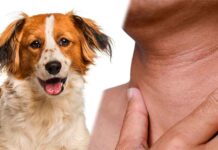