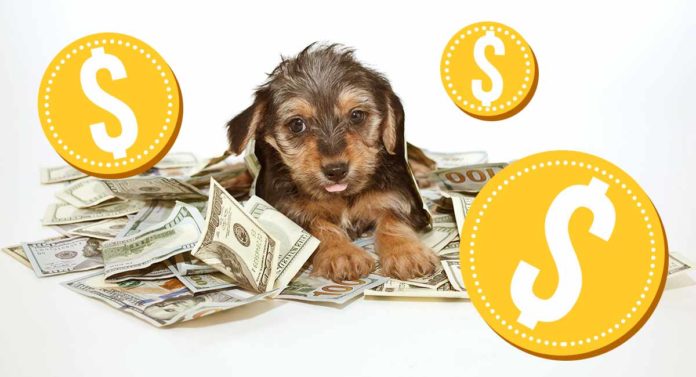 Which is the most expensive dog?

You can’t put a price on the love and companionship you get from your dog.

It’s not only the initial outlay, but the day-to-day expenses of raising a dog that can put a strain on your wallet.

There are also some breeds who have severe genetic health problems and visits to the vet can be extremely costly.

If money is a consideration, this article will take a look at all the financial aspects of dog ownership to help you make an informed decision.

Why Do Some Breeds Cost More Than Others?

Big or small, smooth or long-haired, all dogs are lovable in their own unique way.

So why is it that some breeds are so much more expensive than others?

The reality is that there are a lot of factors that determine the cost of a canine.

Sometimes the reason is as basic as supply and demand.

When a breed is extremely popular, the price tends to go up.

Now and then, a dog is suddenly in fashion because they’re featured in a film.

Others become trendy for being the constant companion of a celebrity.

Winning “Best in Show” at the famed Westminster Kennel Club Dog Show can also put a pooch in the spotlight for a while.

Unfortunately, when a breed suddenly becomes popular, unscrupulous breeders will mass produce puppies in a bid to cash in by selling poorly bred dogs at premium prices.

When a dog’s popularity suddenly spikes, it can just as quickly disappear.

Shelters are then left overwhelmed with dogs who are yesterday’s favorite.

Humans have a penchant for things that are rare and unusual.

The scarcity of certain breeds can mean a long waiting list, and that can be a huge factor in driving up the price of a pooch.

Some dogs are rare because they have trouble reproducing or only produce small litters.

Other breeds are indigenous to certain parts of the world and are scarce because they aren’t suitable for living in another climate.

The dog’s size and color can also impact their price.

There are dogs who are marketed as rare because they’re extremely small, as in the case of teacup dogs.

Unique colors and patterns can have a certain appeal.

Unfortunately, sometimes this is due to a recessive gene, as in the case of the Blue Nose Pitbull and the Dapple Dachshund.

If both parents carry the gene, it can lead to serious health problems for the puppies.

However, even this doesn’t stop some breeders from purposely creating these dogs and charging a premium for something considered rare.

When it comes to pedigree, all dogs are not created equal.

This is why there can be a huge variance in price within the same breed.

Pedigree means the dog has papers which can verify that their ancestors are only of their own breed.

If you’re looking at a puppy whose lineage includes a long line of champions, you’re going to be paying a lot more, regardless of the type of dog.

The assumption is that if the parents were world-class dogs, then their offspring will also be champs.

Is a pedigree worth thousands of dollars more?

If you’re planning on showing your dog, then it may be a good idea to spend the extra money.

However, if you’re looking for a pet, you’ll be paying a lot for bragging rights and a piece of paper.

Which Breeds Cost the Most?

When money is no object, here are the breeds that require a true financial investment.

Their name is German for little lion, and that’s exactly what the friendly Löwchen resembles with their full mane and plumed tail.

In 1960, they were listed as the world’s rarest breed and had almost become extinct several times prior to that.

Even today, the Löwchen is very rare, with only a few hundred registered at official kennel clubs each year.

Although a relative newcomer to the U.S., this regal canine is one of the oldest domesticated dogs in existence, with a history that dates back to 4400 BC.

Built for high speed, with a sleek, athletic build, these sighthounds are traditionally used to hunt rabbits in the Maltese Islands.

This dog is truly unique, in that their nose and ears turn a blushing rose color when they’re happy or excited.

The Pharaoh Hound is the national dog of Malta but is quite rare throughout the rest of the world.

However, the Rottweiler is a dog with some serious and expensive health conditions.

These tests, combined with the high price of stud services, can run into thousands of dollars.

You may see Rottweiler puppies advertised for as low as $500.

The ancient Siberian Samoyed has an eye-catching white coat that requires a lot of maintenance.

This dog has a high rate of hip dysplasia, and surgery to correct it can run into thousands of dollars.

Not only is the Tibetan Mastiff one of the rarest dog breeds in the world, they’re also one of the biggest.

Female Tibetan Mastiffs generally only go into heat once a year, and responsible breeders do not want them to have more than 3 or 4 litters over their lifetime.

The Tibetan Mastiff has become a status symbol among China’s wealthy.

In fact, a Tibetan Mastiff puppy, who sold for a record-breaking $1.9 million in 2014, holds the distinction of being the world’s most expensive dog.

That will make the up to $7,000 you can expect to pay for one of these dogs seem like a bargain.

Here are some other breeds who rate a 4-digit price tag.

Other Costs of Dog Ownership

The list of expenses associated with dog ownership adds up quickly.

However, it’s the high cost of veterinary care that can vastly outweigh all of these other costs.

Every dog is prone to certain genetic health problems.

Unfortunately, there are some breeds who are at risk of severe medical problems that are the result of their conformation.

The High Cost of a Brachycephalic Dog

That sought-after flat-faced appearance found in breeds like Bulldogs, French Bulldogs, and Pugs is the result of the extreme shortening of facial bones.

This causes an obstruction of the airway that is potentially very dangerous, since it interferes with their ability to breathe properly.

While respiratory compromise is highly variable, all dogs with a shortened muzzle will be affected to some degree.

Sometimes surgical correction is the only option.

Unfortunately, these popular breeds are also subject to numerous other health concerns that can make trips to the vet a common occurrence.

Which Breeds Cost the Most Throughout Their Lifetime?

The Bulldog, with his thick-set, well-muscled, low-slung physique and massive head, is one of the world’s most recognized and well-loved breeds.

They’re hugely sought-after, not only for their appearance, but for their friendly and courageous temperament as well.

This is an expensive dog to breed for a variety of reasons.

The upfront cost for a Bulldog puppy can start at around $1,500, but don’t be surprised to see them priced much higher.

Not only are these dogs getting more popular all of the time, the size of their heads and body structure make it almost impossible for them to mate and give birth naturally.

For this reason, most Bulldogs are bred via artificial insemination and birthed by Caesarean section.

But these aren’t the only additional costs Bulldog breeders have to incur.

The French Bulldog has surpassed even their larger English Bulldog cousin in popularity.

Much of this can be attributed to their being fashionable with the rich and famous.

As mentioned, these dogs suffer from brachycephaly and all of the problems that go with it.

Distressingly, unscrupulous breeders will create dogs with exaggerated features to fetch an even higher price for dogs who are sure to suffer extremely severe breathing problems.

French Bulldogs are also subject to other critical conformation problems.

These dogs all suffer from a form of dwarfism called chondrodystrophy, which is characterized by short limbs and causes painful intervertebral disc disease (IVDD).

The combination of a large head and narrow pelvis is why most French Bulldogs require Caesarian sections to give birth.

The Pug is another breed who’s severely impacted by the effects of brachycephaly.

Since their shallow eye sockets cause their eyes to protrude, corneal ulcers are a common and painful problem for the breed.

Their cute little corkscrew tails are actually due to a condition known as screw tail or hemivertebrae.

It’s caused by a bone deformity that can affect the spine, causing excruciating pain and severe neurological problems.

What About Pet Insurance?

The average pet insurance plan ranges from approximately $25 to $100 per month.

However, the price will vary depending on your dog’s breed, age, size, and even where you live.

If you have a brachycephalic breed, it might be hard to find pet insurance.

Make sure to read the fine print so you know exactly what is and isn’t covered in the policy.

The most common reason claims get denied is for preexisting medical conditions.

For breeds like the Bulldog, French Bulldog, and Pug, their breathing problems could be labeled preexisting and therefore not be insurable.

Alternatively, if you can’t find a policy that suits your dog’s needs, you may want to set up an emergency veterinary fund.

Putting aside a set dollar amount every month will at least give you some reserves if you end up with an unexpected vet bill.

Which Breeds Cost the Most to Insure?

When it comes to the price of insurance premiums, size definitely matters.

The most expensive breeds to insure are:

Bringing a dog into your life means an increase in expenses, no matter what breed you choose.

How much that increase is, ultimately, has a lot to do with the type of dog.

Larger dogs will be more expensive to feed and insure.

Dogs with structural problems will likely cost you some serious cash for genetic health problems.

If you see dogs advertised at prices that seem too low, there will be a reason.

It’s important that you don’t buy a dog from a puppy mill or a breeder who has not health tested their animals.

Remember that the purchase amount is only the beginning of what it will cost to own a dog.

But how can you put a price tag on all that unconditional love?

The Löwchen Club of America

“The World’s Most Expensive Dog Breeds,”  The Telegraph, 2019