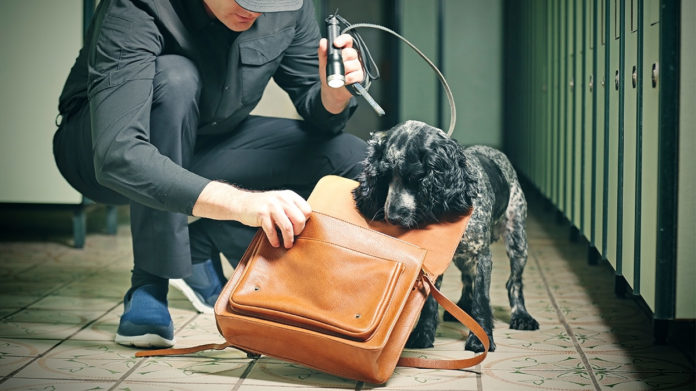 In this article, we will take a look at the mysterious and fascinating lives of sniffer dogs! Our comprehensive guide to the wonderful world of this doggy detective will tell you everything you need to know about these talented canines. Who knows, your own furry friend might even have what it takes to be a canine super sleuth!

What are sniffer dogs?

As defined by the Oxford English Dictionary, a sniffer dog is: “A dog trained to find drugs or explosives by smell.” However, this is a rather restrictive definition, as sniffer dogs do so much more than this.

What do sniffer dogs do?

Sniffer dogs have many and varied roles within society. However, each dog is specially trained to locate one specific thing. Although they’re clearly talented, sniffer dogs are not able to multitask and find lots of different items. You might call them specialists. So, let’s have a closer look at the different jobs that sniffer dogs do.

The fire service also uses sniffer dogs who are trained to detect traces of accelerants, helping to investigate cases of arson. Now that cybercrime is becoming more and more common, sniffer dogs are being trained to find USB sticks, hard drives, and SD cards. These dogs are proving invaluable to the police in cracking gangs of pedophiles, terrorists, and fraudsters who conduct much of their business online.

What makes sniffer dogs so good at their job?

You may be wondering why agencies such as the police use dogs for detection work at all. Well, for a start, a dog’s sense of smell is around 2,000 times more sensitive than ours. There have even been cases of sniffer dogs detecting marijuana that was packaged in sealed plastic bags, hidden inside sealed boxes, and locked inside a building!

A trained sniffer dog can detect smells that are over 10 years old. This ability is particularly useful when searching for potential murder victims who have been missing for a considerable length of time. A dog’s exceptional sense of smell, coupled with his ability to run and climb, enables a sniffer dog to cover a large search area far more quickly and efficiently than a human could.

How are police sniffer dogs trained?

Sniffer dogs love their work, because they have been trained to regard detection duties as one huge game! Narcotics and explosives sniffer dogs are usually trained using a towel. Initially, the handler plays a game of tug-of-war with the dog and his “toy” (the towel). Later in the training process a small bag of marijuana is rolled up inside the towel. The dog then begins to associate the smell of the marijuana with the smell of his favorite toy.

The same method is used for training bomb detection dogs. Various chemicals that are commonly used to manufacture explosive devices are hidden in the towel, rather than drugs.

Sniffer dog training for pooches trained to find human remains is slightly differently from that used for drug and bomb detection dogs. A cadaver dog must have regular contact with decaying human flesh, bones, and blood in order to latch on to the distinctive scent. Although there are some substitute substances that are commercially available, the real thing is used wherever possible.

This is important, as sometimes cadaver dogs are used to search collapsed buildings and other dangerous areas. They must be sure that the dead tissue they have sniffed out is human, rather than animal in origin. Cadaver dogs are trained to recognize the scent of fresh, decomposing, and even mummified human remains. Incredibly, a dog’s nose is so sensitive that a cadaver dog can even find bodies that are hidden under running water!

Having found whatever he is sniffing out, the sniffer dog must tell his handler that he’s found something. Drug dogs are trained to give an “aggressive alert.” They do this by pawing, digging, and sometimes barking at the spot where they smell the drugs. Obviously, this aggressive alert method would not be a good idea where explosives are concerned! In this case, “passive alert” training is used.

A passive alert is usually signaled by a bark or simply by the dog sitting down quietly when they smell an explosive substance. When cadaver sniffer dogs locate human remains, passive alerting is always used so that evidence is not destroyed and the crime scene is not disturbed.

Sniffer dogs are used by border control agencies and customs officials around the world at airports, ferry terminals, stations, and land borders. Many countries and some internal jurisdictions do not allow certain foodstuffs, animal parts, and plants to be taken across their borders. Sniffer dogs are used to identify smugglers who might be attempting to flout the system.

Sniffer dogs to the rescue!

Some sniffer dogs get to work in the great outdoors, helping to locate people who are missing, may be trapped, may have drowned, or may be lost in hostile and unfamiliar terrain. All around the world there are sniffer dogs working as part of search and rescue teams. These canine heroes search mountains, underground cave systems, and even off-piste avalanche zones to find people who may be lost, injured, or trapped.

In hostile environments such as these, the dogs’ speed and endurance is incredibly valuable, as finding a casualty quickly could mean the difference between life and death.

Sniffer dogs are also used within the medical research field to help detect certain medical conditions, including some forms of cancer. A prostate cancer detection trial using animals working for Medical Detection Dogs, based in Buckinghamshire in the UK, was shown to be more reliable at spotting the disease than the blood tests currently used. In fact, a staggering 93% accuracy was recorded for detection dogs!

Scientists think that dogs are able to detect certain volatile molecular substances produced by cancerous cells and are able to detect scent in one part per trillion. When a positive sample is identified, the dogs will sit and stare at it intently to alert their handler. 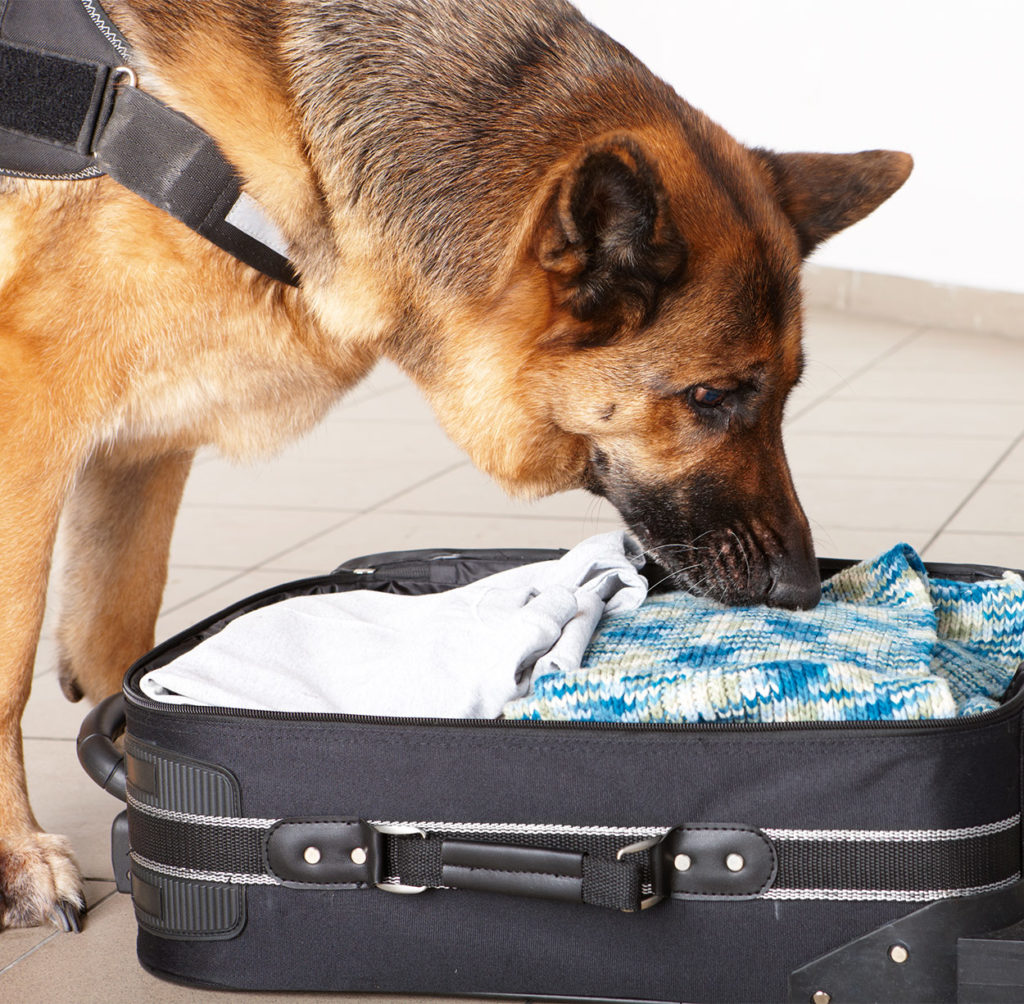 Medical detection dogs are already able to sniff out urological and breast cancers, and they are now being trained to detect lung, bowel, and some animal cancers too. In addition, these furry physicians are learning to detect other diseases such as malaria and Parkinson’s disease.

Some highly-specialized personal assistance dogs are trained to help people who have life-threatening health conditions. These sniffer dogs are trained to detect potentially serious medical events before they occur, especially diabetic attacks and complications arising from a condition called Addisonian crisis. Early warnings provided by the dogs can enable their handlers to seek the medical help they need, before it’s too late.

For people with serious nut allergies, simply being in the same room as an open packet of peanuts can be all it takes to trigger a potentially fatal anaphylactic episode. Some specialty medical alert dogs are trained to detect the tiniest trace of nut oils in the air. The dog will alert its handler immediately, before they come into contact with the allergy trigger. You can read more about these amazing sniffer dogs and the people they help, here.

So, what breeds of dogs are most suitable for training as sniffer dogs?

Bloodhounds are widely used by law enforcement as tracking dogs. The bloodhound is thought to have originated in Belgium in the 1300s, where it was used for hunting wild boar and deer. More recently, the “sleuth hound” has been used by police and law enforcement to track fugitives and missing persons.

The bloodhound is also used by wildlife protection rangers in parts of Africa to track poachers. The bloodhound is equipped with approximately 300 million olfactory sensors and is a tenacious tracker. However, although the bloodhound is naturally calm and gentle, the breed is not easy to obedience train, and for this reason is always used leashed.

The Labrador retriever originates from Newfoundland, where it worked in the fishing industry, helping to retrieve nets and pull carts laden with fish. The Lab came to England in the 18th century, where it become popular as a gun dog. The Labrador retriever is a very popular choice as a search and rescue dog. The breed is also used by border control agencies and law enforcement as sniffer dogs to search for illegal substances in airports and border crossings.

Labradors are often chosen by the armed forces as bomb detection dogs. With a great sense of smell, Labs are also friendly, calm, and extremely trainable, making them ideal medical detection dogs too.

The beagle is a small pack hound that was originally bred to hunt hares. With their keen sense of smell, beagles are often used as sniffer dogs, tracking drugs and other illegal substances at border crossings, ports, and airports.

Originally bred as a herding dog, the German shepherd is usually now most associated with police work. As a general purpose police dog, the GSD is trained to work with human scent. Their primary role is to chase fleeing felons and hold them until police officers are able to make an arrest. However, German shepherds are also used to trace people who may be trapped in collapsed buildings or by avalanches and earthquakes.

Springers are lively, “busy” dogs who thrive on action! The breed was originally developed for use as a gundog, retrieving shot birds from dense undergrowth and water. With their extremely keen sense of smell and highly trainable attitude, springers are a popular choice as sniffer dogs. They are used to detect a wide range of items, from drugs and stolen cash to human remains and missing persons.

The Border collie originates from the borders of England, Scotland, and Wales, where it was bred and trained to herd sheep and cattle. The collie has an acute sense of smell, as well as an almost obsessive herding instinct. These traits make the Border collie perfect for search and rescue work. This working breed also has boundless energy and can work for hours in the most difficult terrain.

Sniffer dogs are the perfect example of how man’s best friend really is just that! We’ve looked at how many different breeds work with their human handlers to catch criminals, find missing people, locate stolen cash, solve arson crimes, and even save lives in medical emergencies.

Do you have a dog who has what it takes to become a canine super sleuth? Do you know anyone who works with sniffer dogs? Why not share your experiences with us in the comments section below – we’d love to hear your story! 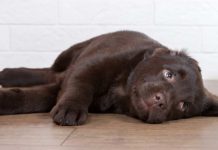