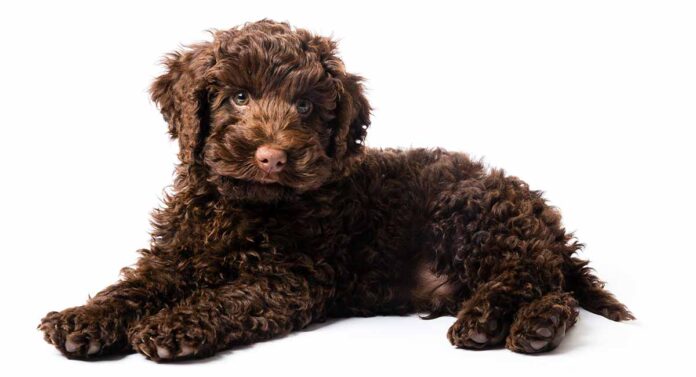 Standard Labradoodles typically stand from 24 to 26 inches and weigh 55 to 95 lbs. This is a fairly big dog. But today, many people are looking for smaller, more manageable versions of popular hybrids. Enter the toy Labradoodle.

Where Does the Toy Labradoodle Come From?

A mixed-breed dog or designer dog is the result of crossing two purebred dogs. However, there’s plenty of controversy surrounding the practice of mixed breeding.

Purebred dogs are bred to a standard. You’ll know exactly what the puppies will be like in terms of appearance, size, and temperament. But when two different breeds are combined the offspring can vary. They may take after one parent or can be a mixture of both. The upside is that there’s some evidence that mixed breeds are healthier than purebred dogs due to greater genetic diversity.

Origins of the Toy Labradoodle

Labradoodles were one of the first designer breeds. And their story begins in Australia in the 1980s. Breeders wanted to create a service dog with the sweet disposition of the Labrador and low-shedding coat of the Poodle.

Although Labradors and Poodles appear to be very different dogs, they were both originally used as waterfowl retrievers. Labradors are descendants of the St. John’s Dog. This fisherman’s friend hails from Newfoundland, Canada. The Poodle was also developed for retrieving game from the water. But more than 400 years ago in Germany. And Miniature and Toy Poodles were bred down from the Standard Poodle. So, they are, in fact, just three varieties of the same breed.

Fun Facts About the Toy Labradoodle

Puppies of two different purebred parents can look more like one parent than the other. Or they could be a mixture of both. Toy Labradoodles typically have a square, compact build. They normally stand from 14 to 16 inches and weigh between 15 and 25 lbs. However, there’s no guarantee they’ll definitely end up within this range.

Do you or someone in your home suffer from allergies? You may be choosing a toy Labradoodle because you’ve heard their coats are hypoallergenic. While it’s true Poodles shed far less than Labs do, they still produce allergens. So, it’s important to be aware that no dog is 100% hypoallergenic. Also, a toy Labradoodle’s coat can vary quite a bit, too. It could be thick, curly, and low-shedding like the Poodle. Or short, straight, and dense like the Lab.

Toy Labradoodles come in a cornucopia of colors including

The best way to determine the type of coat your puppy is to check out the parents.

Similar to appearance, the temperament of mixed breeds can be a mashup of both breeds. However, in this case, both parents are responsive, playful dogs that make wonderful family companions. The Labrador, in particular, is famously friendly and outgoing. These affectionate dogs bond easily with all family members and get along with everyone, including other dogs. Miniature Poodles can be a bit aloof around strangers and other dogs. But will be loyal and loving to their family.

This breed is highly touted for their keen intelligence and trainability. Combining two such spirited breeds is sure to create high-energy offspring. Toy Labradoodles require regular exercise and playtime with those they love.

Start socializing your toy Labradoodle early. These smart little dogs are capable of learning when as young as 8 to 10 weeks of age. Even dogs that are not necessarily prone to aggression or other unwanted behaviors act up. Especially if they haven’t been properly introduced to lots of different people, places, and situations.

You should always use positive reinforcement training methods to train any dog. One study found that punishment adversely affects a dog’s behavior. On the other hand, reward-based training may improve a dog’s ability to learn.

Despite their smaller size, toy Labradoodles come from two very active, working breeds. So, they’ll need plenty of daily exercising. Physical activities such as walking, running in the yard, and playing games are important. And so is mental stimulation to avoid boredom.

However, you’ll need to be careful since the Labrador is prone to exercise-induced collapse (EIC). So, make sure your dog doesn’t over-exercise. Especially, in hot, humid weather.

As a designer dog, the toy Labradoodle is at risk of the same possible health conditions that affect both parents. Therefore, it’s important to be aware of the inherited disorders of both breeds. And when looking for a puppy, make sure the breeder regularly tests for any genetic health problems in both parents.

With the toy Labradoodle, you should look out for several potential health problems. For instance, Labradors and Poodles are both genetically predisposed to hip dysplasia. This condition is characterized by abnormal formation of the hip socket and causes the hip joint to deteriorate over time leading to arthritis.

Another one is Progressive retinal atrophy (PRA), a leading hereditary cause of blindness in dogs. The degenerative disease starts with night blindness. Eventually, resulting in the complete inability to see. And unfortunately, PRA affects both breeds.

Other health conditions that affect the Labrador include

Miniature Poodles also have their share of health concerns. This includes orthopedic disorders like patella luxation or dislocation of the patella. In addition, Legg-Calve-Perthes occurs when the head of the femur bone spontaneously degenerates.

Miniature Poodles are also prone to

Grooming requirements will depend on the type of coat your toy Labradoodle has inherited. Typically, curlier coats require more grooming to prevent matting. Plus, they may also need to be clipped by a professional groomer once a month or so. Regardless of coat type, you should brush your toy Labradoodle at least once or twice a week.

Some toy Labradoodles shed a lot. Especially, during shedding season. In addition, you’ll need to check their ears, trim their nails, and clean their teeth. Toy Labradoodles should be fed high-quality food suitable for their age and size. And it’s important to remember that less active dogs require fewer calories to avoid becoming overweight.

Toy Labradoodles are generally good-tempered, loyal dogs who love to play. They’re great with kids. But can be too exuberant to have around young children. As long as they’re properly socialized, you shouldn’t see any behavioral problems. As these dogs are usually intelligent and trainable. Of course, this is provided they get enough exercise and attention. Toy Labradoodles may be prone to separation anxiety if left alone for too long.

Since Labradoodles are such a popular hybrid breed, many shelters are dedicated to them. So, it’s quite possible to rescue a toy Labradoodle. Unfortunately, if a dog is in great demand, unethical breeders see this as an opportunity to make some fast money. And often, health problems and temperamental issues are associated with bad breeding practices. And sadly, many of these dogs wind up in shelters. This doesn’t mean they can’t make a good pet. They may just need some extra time and tender loving care.

However, it’s always important to ask about the dog’s history. That way, you know what you’re getting into. Adopting an older toy Labradoodle allows you to see exactly what the dog looks like. This is also a good option if you don’t want to deal with a rowdy pup. And luckily, toy Labradoodles retain their puppy cuteness throughout life.

The popularity of mixed breeds and miniaturized versions of them continues to soar. It cannot be overstated how important it is to find a good breeder. Pet stores and online ads that will send you a puppy sight unseen should be avoided at all costs. In almost all cases, these dogs almost always come from puppy mills. Here, they live in dirty, cramped conditions receiving sub-par food and very little veterinary care.

Providing a puppy with high-quality care is the best way to ensure they’ll grow to be a happy and healthy adult dog. Don’t forget to check out our dog training tips for more advice.

Pros and Cons of a Toy Labradoodle

Here’s a brief overview of the good and bad aspects of owning a toy Labradoodle.

Choosing to rescue a toy Labradoodle instead of buying a puppy is a wonderful idea. It’s not only less expensive, but you’ll be giving a new loving home to a dog who truly needs one. You may find a toy Labradoodle at rescue organizations that don’t specialize in a specific breed, but here are some that focus on the doodle dogs.

Is a Toy Labradoodle Right For Me?

If you have time and energy to keep up with the toy Labradoodle, they make wonderful pets. Just remember, the exact traits of a mixed breed puppy can be unpredictable. And “toy” is a relative term. Therefore, this breed could grow up to be much larger than you think. But certainly not less lovable!

Do you share your life with a Toy Labradoodle? Tell us about your experience in the comments section below.

Vredegoor DW et al. 2012. Can f 1 levels in hair and homes of different dog breeds: Lack of evidence to describe any dog breed as hypoallergenic. Journal of Allergy and Clinical Immunology.

Minor KM et al. 2011. Presence and impact of the exercise-induced collapse associated DNM1 mutation in Labrador retrievers and other breeds. The Veterinary Journal.

Petersen-Jones SM. 1998. A review of research to elucidate the causes of the generalized progressive retinal atrophies. The Veterinary Journal.