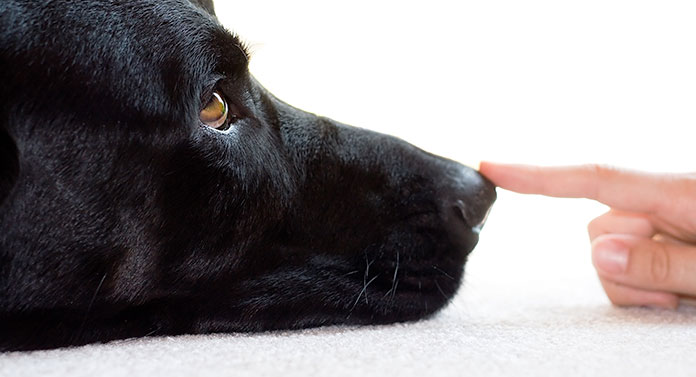 A healthy dog usually has a cold, wet, nose. But, why do dogs have wet noses? And what does it mean when a dog’s nose is dry and cracked? Or wet but warm?

If you want to know how to tell whether your dog’s nose is healthy, and how to take extra care of a delicate nose, you’ve come to the right place.

What makes a dog’s nose so special?

Before we get to the question: “Why are dog’s noses wet?”, we first need to know more about dog’s noses.

Dogs are famous for their sense of smell, so obviously they don’t have just any old off-the-shelf kind of nose.

Their noses, and the areas of their brain dedicated to making sense of smells, are highly specialized. In fact, dogs depend as much on their noses to focus on their world as we do on our eyesight. 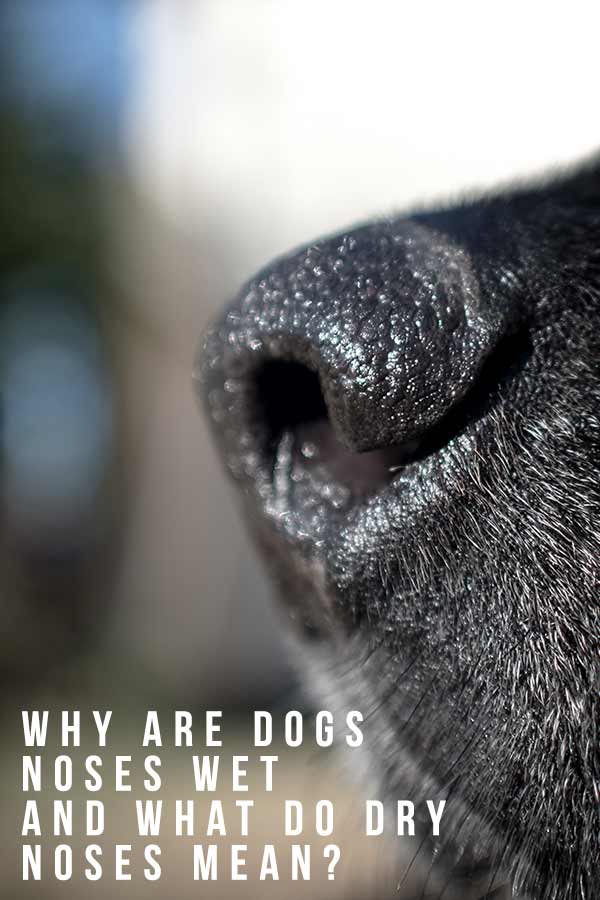 If you’ve ever had a chance to examine a dog’s nose up close, you’ll have noticed its curious lumpy surface. This surface has a special name: the rhinarium.

Just like humans, dogs have specialized nerve endings in their nose. These scent receptors detect smells and send information about them back to the brain.

However, unlike humans, those scent receptors aren’t just inside the nose, they’re all over the surface of the rhinarium too.

All those tiny little lumps on your pup’s nose are there to increase its surface area. The result is that the surface can be as much as sixty times bigger than the surface of a human nose. 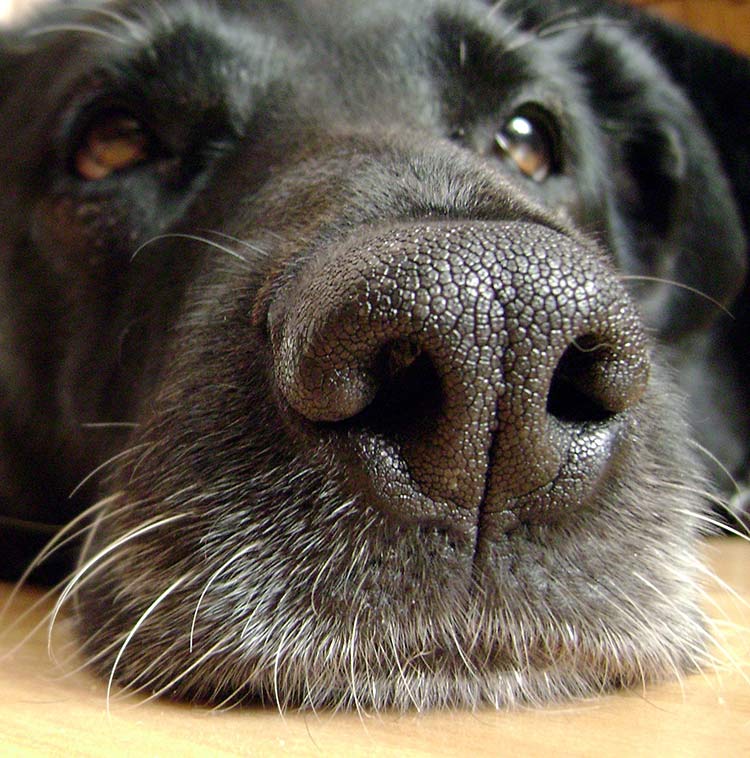 But the number of scent receptors isn’t the only special physical adaptation dogs have to make their sense of small so powerful.

The power of a dog’s sense of smell

Like a lot of other animals, but not us humans, dogs have a vomeronasal organ right at the back of their nose. This specialized organ detects scents in fluids whereas we only detect the smell of particles which have become airborne.

Dogs can even move their nostrils independently to pinpoint the exact location of a smell. Furthermore, when they sniff they can accumulate new air with each sniff without exhaling all of the scent from the previous breath.

These remarkable nasal refinements mean dogs have a sense of smell at least 100 times better than humans.

And boy, do they rely on it – up to 30% of their brain is thought to be used for interpreting smells. This is 40 times more brain space than we use for smelling.

When dogs meet another dog they can tell if they are a boy or a girl, where they’ve been and who they’ve met, what mood they’re in, and even what they had for breakfast.

And because dogs can detect scents in tiny concentrations far beyond our own sense of smell, they can be trained to help us in the most incredible ways.

Medical companion dogs can tell when someone is going to have an epileptic seizure or recognize the onset of sudden hyperglycemia in people with diabetes. They are even being trained to detect some types of cancer.

So now let’s have a look at why do dogs have wet noses.

Why are dogs noses wet?

Have you ever had a nose shoved into your hand by a dog keen to make your acquaintance. They do this to learn everything about you – like “Have you brought snacks?” – leaving you slightly soggy for the experience.

Dogs tend to keep their noses wet. And having a wet nose serves two special purposes.

First, just like the mucus in our own nose, it traps scent particles against the skin. This makes it easier for the scent receptors to register them.

Secondly, movement in the air evaporates the wetness and cools the skin. Dogs can use this information to tell from which direction a scent is coming from. 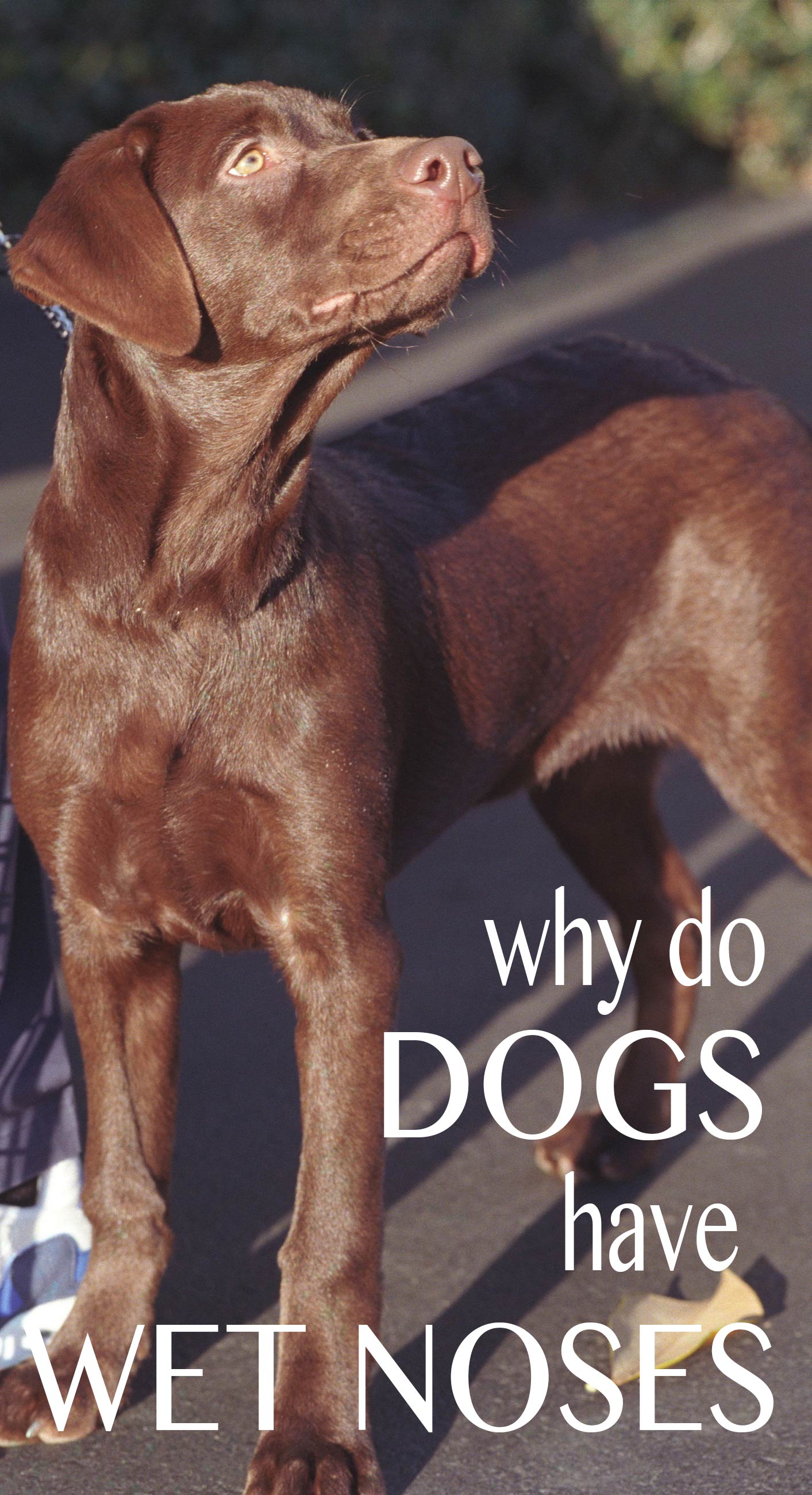 Dogs wet their noses by secreting mucus from their nostrils. They also give their nose an occasional lick to cover it with saliva.

Moreover, they also have an impressive knack for finding wetness in the environment – in their water bowl or even a patch of dewy grass.

So are dogs’ noses supposed to be wet – always?

My dog’s nose is dry

There’s an old wives’ tale that if your dog’s nose is dry, they are sick.

But in fact that’s just not the case. It’s completely normal for your Labrador’s nose to be wetter at some times than at others.

Your dog’s nose might be dry because they just had a nap by the fireside. Or they played hard outside in the wind.

And there’s plenty of variation between individuals as well. Some dogs just have drier noses than others. 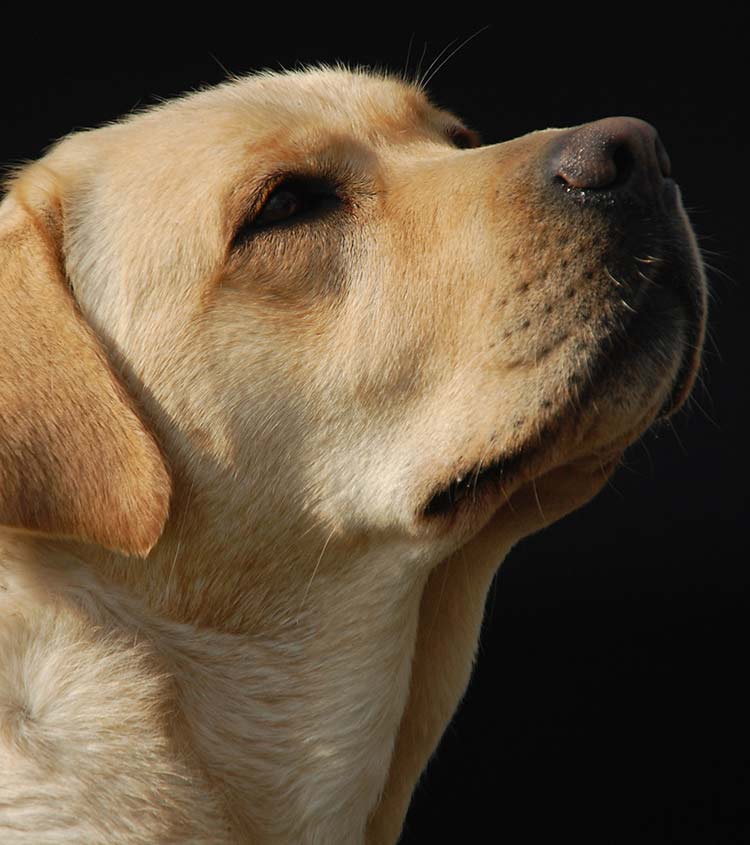 Because of this natural variation, a dry dog nose doesn’t mean your pet is sick.

So, a dry nose in and of itself isn’t a problem and doesn’t require treatment. If their dry nose is something to worry about, your pup will usually show other signs of illness as well.

Should a dog’s nose be cold?

Again, there’s no right or wrong answer to this question. Having a cold nose is really a side-effect of keeping it wet.

When dogs wet their nose to help locate the source of a smell, they rely on evaporation to tell which way the air is moving.

They also use the evaporation to cool down because dogs don’t have sweat glands like we do.

So when your dog’s nose feels cool to the touch is just because they are keeping it wet enough to do its job. 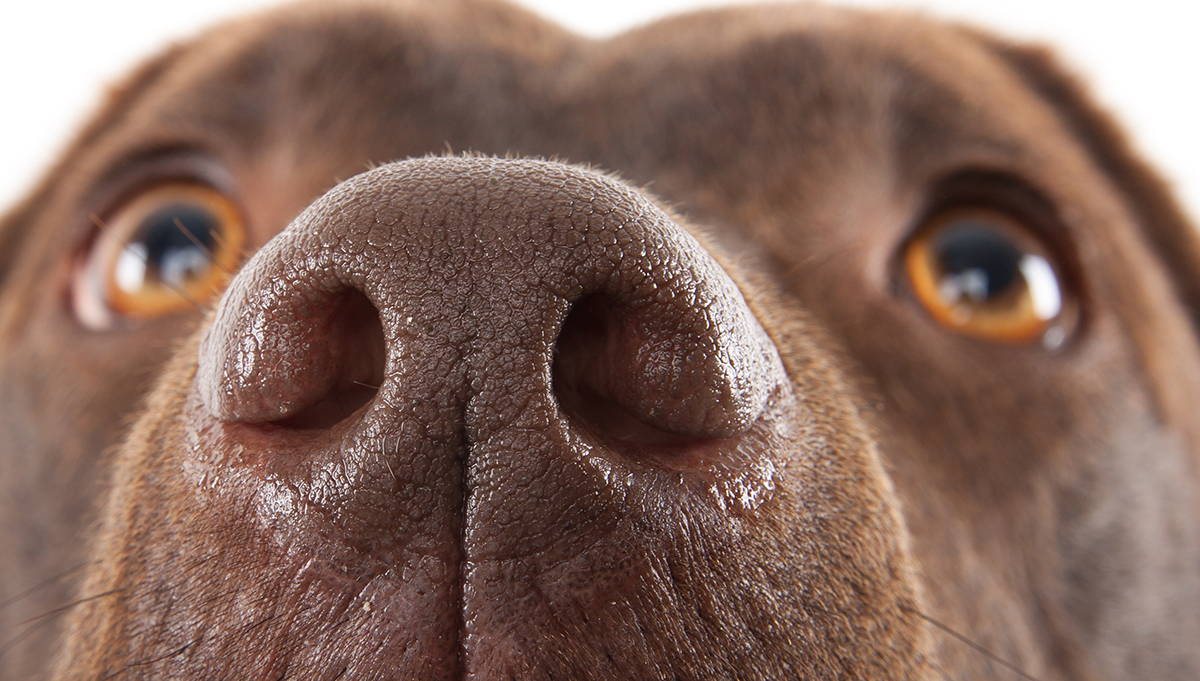 My dog’s nose is warm

Sometimes your dog’s nose might be warm and that is also fine!

It’s completely normal for the temperature and dampness of your dog’s nose to change throughout the day. It also varies between individuals.

So a dog’s nose is usually wet and cold – but with some natural variation. This depends on the environment and what they are doing.

Dog noses can, however, point to health issues and that’s what we will have a look at next.

My dog’s nose is dry and cracked

A very dry or even a cracked nose can be from low humidity after turning on the central heating in winter or from mild sunburn.

It could also be a sign of a skin disorder. Consult your vet if you believe that this might be the problem.

You can soothe a dry and cracked nose with some coconut oil or one of the many natural products on the market which work like lip balm for humans.

Don’t use paraffin-based products like Vaseline. The products only give the illusion of relief, whilst actually drying the skin out more.

And never use medicated products unless advised by your vet to do so.

My dog’s nose is running

As we discovered earlier, dogs secrete mucus from their nostrils to keep the rhinarium wet and improve their sense of smell.

So a runny nose, even a nose which seems to be dripping constantly isn’t likely to be a symptom of illness – if it is running clear.

However, a trip to the vet is in order if the discharge becomes cloudy, yellow, green, or smelly. These symptoms could be a sign of an allergy, blockage, infection, or even something more unusual.

Your vet will be the best person to identify the problem and prescribe a course of treatment.

Skin diseases on a dog’s snout or rhinarium can be caused by all kinds of things. Causes can range from easily managed mites and fungal infections to more sinister immune system disorders and cancers.

Symptoms to look out for include:

If you notice any of these symptoms on or around your dog’s nose, take them to your vet for a thorough examination. They may need to carry out some tests in order to make a diagnosis.

My dog’s nose is bleeding

Nose bleeds in dogs are usually the result of a scratch, a bump or an upper respiratory tract infection.

If your dog’s nose is bleeding, stay calm and place an ice pack over the bridge of their nose. The cold will constrict the blood vessels in the nose and slow down the bleeding.

Take extra care when applying an ice pack to the face of a flat-nosed dog – make sure that they can still breathe comfortably around it.

I know that remaining calm is easier said than done when you’re worried for your furry friend. Especially if you’re squeamish around blood.

But if your dog picks up on your anxiety they might become agitated in turn. Then an increase in their blood pressure could make the bleeding worse.

If a nose bleed doesn’t stop, or your dog gets recurring nosebleeds, ask their vet for advice.

Why are dog’s noses wet? – a summary

So why are dogs’ noses wet? Well, dogs have wet noses to improve their sense of smell and to cool down.

But it’s not usually a cause for concern if your dog’s nose is dry, runny, or warm – just as a wet nose dog doesn’t guarantee that they are healthy.

It’s worth getting to know your dog’s nose. You will then be able to recognize any changes which might need veterinary attention.

Which isn’t really such a chore, when their noses are so lovely!

Tell us about your dog’s nose!

Does your dog greet you with a cold wet nose, or a warm dry nose? Have they ever left you completely flabbergasted by their acute sense of smell?

Tell us your stories in the comments section below.