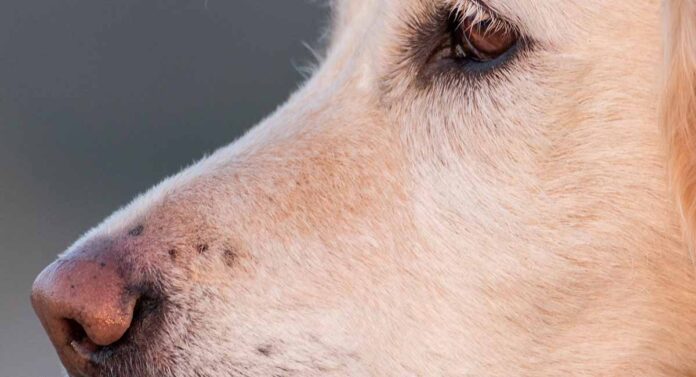 Why do dogs have whiskers? Dogs’ whiskers have many nerve endings at their base, which means dogs can use them to help make sense of their surroundings by touch. They are so sensitive that they can even detect small changes in air movement. Let’s take a closer look at what dogs use their whiskers for.

Short or long, smooth or curly, dogs are covered in an abundance of fur. But they also have tactile hairs that are twice as thick as their regular hair. These coarse hairs are strategically located around their nose, eyes, cheeks, and chin. And even though we commonly refer to these hairs as whiskers, they’re very different from those that humans grow on their faces.

Although these whiskers may seem fairly insignificant, they actually perform a number of important functions for dogs. This article takes an in-depth look at why dogs have whiskers.

Why Do Dogs Have Whiskers?

Officially known as vibrissae, your dog’s whiskers are nothing like the fur he has on his body. The follicles at the base of these long, stiff hairs are equipped with a high concentration of Merkel cells, which are full of nerves that make them far more sensitive than regular hairs. They serve as receptors that are similar to the antennae of insects and pass along sensory information to the dog’s brain that help him navigate the world.

When his whiskers come into contact with something, they vibrate and stimulate the nerves in the hair follicle. In fact, the word vibrissae comes from the Latin word “vibrio” meaning vibrate. As humans, our sense of touch is most closely associated with our fingers, but canines use the vibrissae on their face to feel what’s around them.

Why Do Dogs Have Whiskers—What Are The Different Types

The whiskers that protrude from either side of your dog’s muzzle are known as the mystacial whiskers. They are the most common type and look like an adorable moustache. They are supplemented by the genal whiskers, which are found on the back of the dog’s cheek at the widest part of the face. Supraorbital whiskers are located above their eyes and are sort of like eyebrows. That little cluster of whiskers under his chin, which often sprouts from a dark spot of skin, is called the interramal tuft.

Why Do Dogs Need Whiskers?

Your dog’s whiskers help him define distance and where he is in space to guide him through his daily interactions. Highly sensitive vibrissae not only sense physical objects, they’re also able to detect movement as minute as light changes in the air current. Subtle vibrations give him information about the location, size, and speed of things so that he can navigate his surroundings and sense approaching danger.

So if you’ve ever wondered why do dogs need their whiskers—you can see that they keep him from bumping into things that could cause injury. Even in the dark, he’s able to locate his comfortable bed or a favorite toy hidden under the sofa.

Whiskers can also be used to tell him if he’s able to fit into a tight space without getting stuck. One study found that the vibrations of the vibrissae may allow them to sense texture, as they alternately stick and slip when dragged across a rough surface. If your dog has ever had surgery or been injured and needed to wear a dog cone around his neck, you may have noticed that he seemed confused. That’s because canines can become disoriented without the use of their whiskers.

Why Do Dogs Have Whiskers On Their Face?

We know that dogs have a keen sense of smell and an ability to hear things we can’t. But when it comes to eyesight, dogs simply can’t see as well as we do. Although their vision is better at a distance, they have a hard time focusing up close. Dogs also have a blind spot under their chin, which explains why they have a hard time seeing what’s right under their nose. So, while his mystacial whiskers detect what’s on either side of him, his interramal tuft alerts him as to what’s beneath his face.

Supraorbital whiskers protect your dog’s eyes from very small particles that could potentially damage his eyes. These long, coarse whiskers work like radar detectors, so that an insect, pollen, or even dust will be sensed and trigger his blinking reflex.

Why Do Dogs Have Whiskers To Communicate?

We’ve seen a number of reasons that answer the question, “Why do dogs have whiskers?” But in addition to helping them navigate, vibrissae also help dogs communicate how they feel. When your pet is happy, his whiskers tend to be in a relaxed, neutral position. If he’s active and occupied they tend to be upright.

Dogs that are nervous or shy may hold their whiskers close to their face. But those who feel threatened, will flare them and point them in a forward direction. It’s also theorized that whiskers play a role in aggression and attack behavior when in antagonistic situations with predators or other canines.

Why Do Dogs And Cats Have Whiskers?

Dogs certainly aren’t the only mammals that have whiskers. In fact, most do including all primates, except humans. Of course cats have whiskers and like dogs, they’re filled with nerve endings that don’t need to be touched in order for them to be able to sense something around them. Mother cats have been known to nibble on the whiskers of their kittens while grooming them in a bid to keep them close to the nest.

Other reasons why mammals have these tactile hairs include:

Why Does My Dog Have Whiskers—Can I Cut Them?

You may be wondering what happens if you cut off a dog’s whiskers. Maybe you don’t like the way they look or are sick of his interramal tuft dripping water across your clean floor. Show dogs in particular, often have their whiskers removed because it’s thought to give their face a “cleaner” look and a better chance of winning in the show ring.

Vibrissae don’t have pain receptors and it won’t cause the dog pain to have them cut. But it will reduce his sensory capacity. This can lead to disorientation and confusion that compromise his spatial awareness. It can cause him to be unsure of his surroundings and more susceptible to injury. This in turn can make him timid and fearful, which can even lead to aggressive behavior in some dogs.

Will They Grow Back?

Like other hair, vibrissae will shed normally and grow back if cut. Plucking the hairs will cause pain because they’re connected to nerves and blood vessels. For your dog’s sake, abstain from cutting or plucking his whiskers. Your pooch’s comfort and well-being should always take precedence over aesthetics.

Unlike human males, puppies have whiskers long before they hit puberty. In fact, whiskers are present at birth and are usually the first hairs to develop as puppies grow.

Why Do Some Dogs Have Whiskers In Abundance?

They can be short or long and in a variety of patterns. But all dog breeds have whiskers. In fact, even hairless dogs usually have them. Some dogs have more whiskers than others due to their breed.

Whiskers are an important feature for short-legged terriers, such as the Cairn Terrier, Scottish Terrier and Jack Russell Terrier. These dogs are notorious diggers and bred to go down tunnels after prey. Their vibrissae comes in handy to ensure they don’t get stuck in a narrow hole.

Whiskers also help hunting breeds like the Irish Wolfhound and the German Shorthaired Pointer locate game by detecting movement. Their radar-like whiskers can help them determine the shape and size of an object and even how fast it’s moving. But individual dogs of any breed can have more whiskers than others. It’s just one more thing to make them special.

Why Do Dogs Have Whiskers – Summary

Protection, navigation, communication, you can see that a dog’s whiskers perform plenty of valuable sensory functions. They should never be trimmed or plucked for any reason. Doing so can really disorient him.

Does your dog have cute whiskers? Let us know in the comments!

If you’re keen to learn more about dogs and their bodies, take a look at some of the following articles!