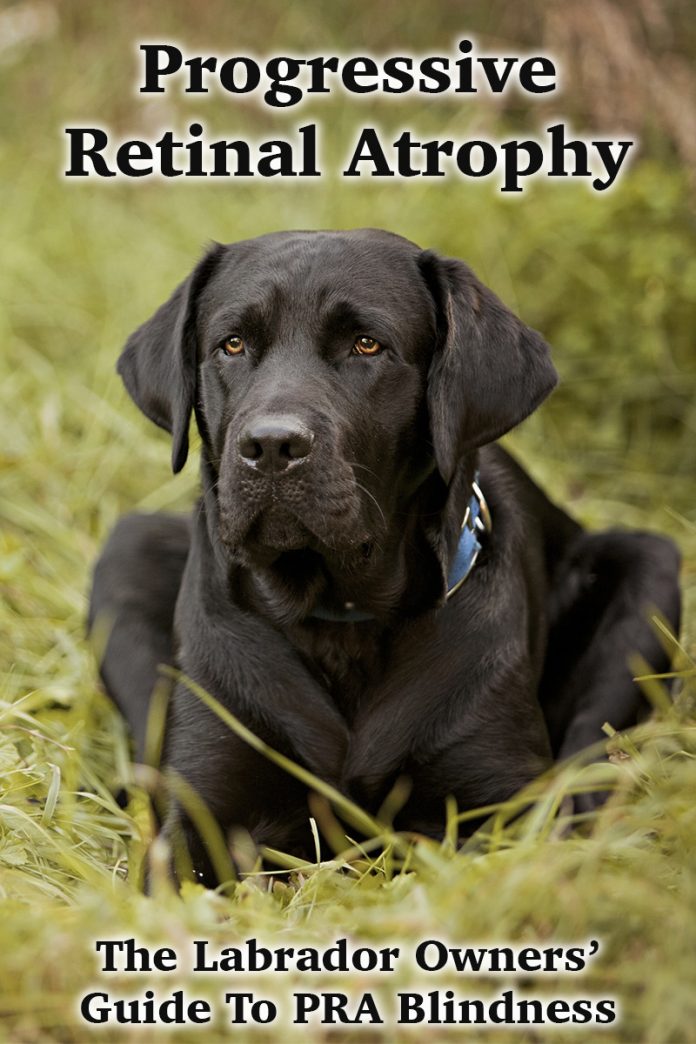 Progressive Retinal Atrophy in dogs is commonly known by the abbreviation PRA. It is an important condition to be aware of if you are thinking of buying a Labrador puppy, or have a dog from parents who weren’t health tested. In this article we are going to take an in-depth look at PRA in dogs, helping you to understand what it is and what you can do to protect your Labrador.

PRA is the term used to described a collection of diseases that degenerate the lining at the back of the eye, known as the retina. This lining absorbs, reflects and processes light. Progressive Retinal Atrophy diseases result in the retina slowly failing to function at all, leading to blindness.

PRA comes in different forms, and the age that the dog’s eyes are affected and rate of progress of the disease will vary between them. Dogs with Progressive Retinal Atrophy will lose their sight anywhere between a year and eight years old.

The type of Progressive Retinal Atrophy we see most commonly in Labrador Retrievers is prcd or ‘progressive rod-cone degeneration’. In most common forms of PRA it is the rod cells that are impacted by the disease, which gives them a mutation that causes them to die. This mutation can happen early in the dogs life, usually leading to blindness by the first birthday, or develops later on at around three to five years old.

Once the rod cells have died, too much oxygen is brought into the eyes for the remaining cone cells to cope with. They in turn become damaged and die as well.

The retina gradually becomes atrophied, giving less and less vision. In some rarer forms of PRA the action is a little different, with the pigmented epithelium coating of the retina losing it’s ability to process light.

Progressive Retinal Atrophy affects both of the dogs’ eyes. Although this process sounds nasty, it doesn’t cause the dog any pain at all. And the slow alteration in their vision means that dogs with PRA blindness tend to learn to cope pretty well. In fact the progression of PRA is so slow that most owners will not realise that their dog is effected until the eyes form cataracts..

Signs Of Blindness In Dogs

There are numerous signs of blindness in dogs. Including those clear to their owners such as a cloudy appearance to the eye, to more subtle signs like changes in behavior.

Dogs with PRA blindness will show a fairly specific selection of symptoms, due to the slowly progressing nature of the diseases.

When it follows it’s usual projected pattern, PRA causes full blindness within a year of the symptoms first occuring.

PRA can often be confirmed by a veterinarian through a simple visual examination using an ophthalmoscope. They will look for signs of problems with the blood vessels in the retina, optic nerve and tapetum.

In dogs with secondary cataracts or for a confirmed later stage diagnosis, a veterinarian will need to use an electroretinogram, that records electrical impulses to confirm the diagnosis. This needs to be carried out under general anaesthetic, and involves putting an electrode onto the dog’s cornea and next to the eye. It can also be diagnosed before any symptoms are showing using a DNA test.

We have had a diagnostic test of sorts available to us for over twenty years now, in the form of an annual eye examination for dogs. This important test helped to reduce the spread of the inherited disease. But it only gave limited information to the veterinarian, as it only showed them whether the dog was displaying symptoms at the time of the test.

It did not show whether they would develop the disease later on in life. This is where the fairly recently arrival of DNA testing comes into play.

PRA testing is possible as this disease has been linked to a particular faulty gene. PRA in Labradors is recessive, which means that you need to have the gene passed from both parents for your puppy to be affected. Every dog will inherit two copies of the gene, one from each parent. If both copies are healthy, the dog can never develop this form of blindness and cannot pass the disease onto its offspring.

Not a sure thing

However it is interesting to note that one study showed that although carriers do not display blindness as caused by PRA, they do still show some signs when their retinas are studied. With a general reduction in photoreceptor density as well as some areas of the retina with no rod cells. They won’t however go blind as a result of this.

The Optigen test for Labradors allows us to know whether an individual is clear, a carrier or affected. It helps us to make good choices about which dogs to breed from, and which other dogs to breed them with.

From a DNA sample the Optigen test can specifically determine whether or not the dog being tested has two healthy copies of the gene, two faulty copies or one of each. If he has two healthy copies he is designated as ‘clear’ of prcd-PRA. If he has two faulty copies he is designated ‘affected’ and if he has one of each he is a ‘carrier’.

The Optigen test is giving us a lot more information than the old eye exam. Especially it enables us to tell carriers and affected dogs apart, long before the affected dog’s eyes begin to deteriorate. And because it is a genetic test, it only needs to be done once.

In addition to this, puppies from two ‘clear’ parents need never be tested, as they cannot possibly inherit the faulty gene. However, perhaps the best thing about Optigen is that it allows us to breed from carriers, an act that some people find hard to understand initially.

Having the ability to breed for dogs which carry the faulty prod-pra gene is highly beneficial to the breed, because it maximises the gene pool. Within any breed of dogs that are contained within a closed gene pool, there is an increasing risk over time of new diseases appearing. And this risk reduces the gene pool ever further.

Each generation has its favourite stud dogs, and these tend to be used extensively on female dogs all over the country. Restricting matings to those between dogs who are also clear of prcd-PRA reduces the gene pool further still.

The last thing we should be doing is limiting our choice of breeding stock even further. Enabling matings to take place between clear dogs and carriers, give us a far greater choice of mates. Whilst ensuring that no puppies are born which will suffer from these diseases. Maintaining genetic diversity is crucial if we are to maintain the health of our pedigree dogs. And the Optigen test is another weapon in our arsenal in the battle against the disease.

Buying A Puppy From A Carrier

If your puppy puppy turns out to be a carrier, then just ensure that if you want to mate her you select a ‘clear’ stud dog.

PRA is predominantly an inherited disease. This means that your puppies genes will play a big part in whether or not he develops this disease.

The Optigen test is not a cure all, and there are other causes of blindness in Labradors. For this reason it is still a sensible precaution to buy puppies from breeders that also carry out the annual eye check. However, this relatively recent addition to the battery of tests that many Labrador owners now embark upon before breeding their dogs, offers long term benefits to the health of the breed.

It does so by eliminating affected dogs from our breeding stock before they show symptoms. And by enabling us to maximise genetic diversity through breeding from carriers where appropriate.

Sadly there is currently no cure for PRA. If your dog has been DNA tested as having two faulty genes, then he will develop PRA at some point in his life. However, although there is no cure it is possible that there may be a way to slow down the progression of the disease.

Anti-oxidants are being investigated for slowing the rate of damage. This is because they are hoped to protect the cone photoreceptors in your dogs retina from being damaged by the excess oxygen. However, as yet there are no clinical studies to confirm this conclusively.

Life With A Blind Labrador

Although it is very upsetting to know that your dog has or will develop PRA, there are lots of things you can do to help him adjust. Here are some good tips to follow to help your Labrador to stay happy and confident:

Progressive retinal atrophy is a slowly working disease. This does mean that the dog will lose their sight gradually, and have time to adjust to their new situation. With your help and support they will continue to have a happy and comfortable life.