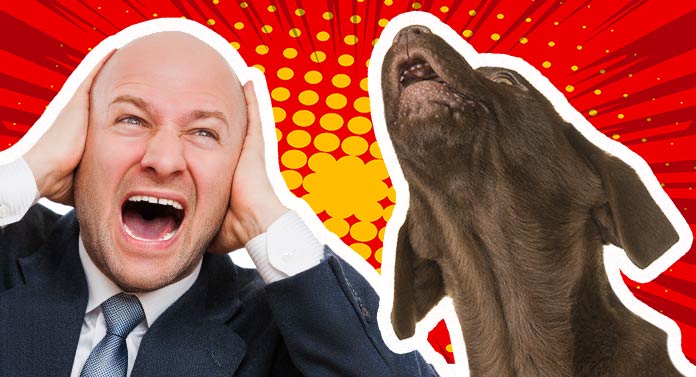 Why do Labradors whine? Labradors whine in a number of different situations, to communicate information to both other dogs and people. If your dog whines a lot, you can teach them to whine less. How you do that depends upon why they are whining in the first place.

Dogs whine to communicate with other dogs and people. In fact, barking and whining are the two forms of vocalization dogs use most often. This is likely to be because they are both highly effective means of getting attention, and very difficult to ignore! But whining doesn’t mean the same thing in every situation. 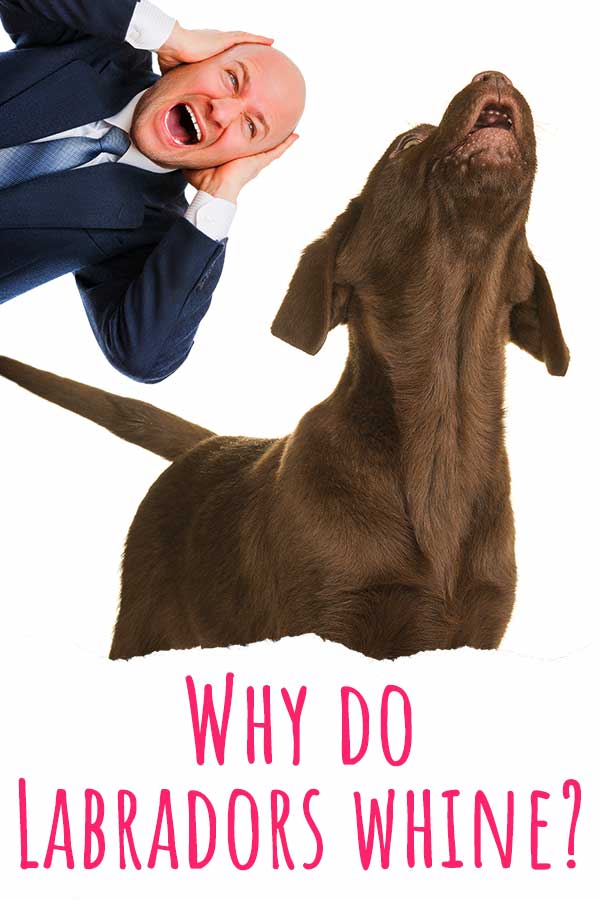 Here are some of the reasons Labradors (and all other dogs) whine:

Dogs can conceal an awful lot of pain and discomfort. For their wild ancestors, hiding any sign of vulnerability would have been vital for survival, and that trait persists in domestic dogs today. But if they receive a painful injury, or a chronic condition starts becoming too much to bear, they might whine in response to the intense discomfort. If your dog is whining, and you can’t explain why, ask your vet to examine them for sources of pain.

For some dogs, whining becomes part of an intense, over excited greeting. It can be directed at people or other dogs, and it’s basically a bubbling-over of enthusiasm, being released as noise. So it follows that his kind of whining is most likely to happen when your Lab sees a friend that they have an especially rewarding relationship with.

Look out for their tail held high and wagging, and other excited greeting behaviors, like jumping up.

3. To keep the peace

We’ve already touched on how difficult whining is to ignore. It’s not dissimilar to the sound of a human baby crying – which we seem universally programmed to respond to. We’re very likely to instinctively look towards the source of a whining sound. And even when we try to ignore it, it’s one of the sounds most likely to wear us down so that we eventually cave and give it attention.

Unfortunately, giving attention to our Labs when they whine is a powerful reinforcer. Whatever their state of mind the first time they got our attention through whining, they now know that in future they can use it to get our attention in any situation. Or course, it’s not an intrinsically bad thing for our dogs to want our attention.

From the outset of domestication, people made breeding decisions in favor of dogs who sought out human attention. And we can’t simply switch that trait off now. But we can take control of our relationships with our dogs, so that they don’t learn whine for attention from us – and we’ll come back to that shortly.

To tell the difference, look for other signs that your Lab is experiencing an abnormal degree of distress when left alone – for example pacing and panting as you prepare to leave. Bear in mind that it doesn’t matter whether they’re a working dog or a family pet – both types of Lab are equally likely to whine when their owner is absent. And now, let’s look at how to stop a dog whining a lot, depending on the reason they started.

Help! My Dog Whines A Lot!

It can get frustrating living with a Labrador with an out of control whining habit. Making too much noise, including whining, can even result in dogs being relinquished to animal shelters. If your dog is constantly whining, that’s not normal. But there are ways to bring the situation under control.

This works best for Labradors who whine as part of an excited greeting, or who whine for attention. It changes their behavior by making not whining more rewarding than whining. What it doesn’t do is change how your dog thinks or feels at the point when they would have started whining. Which is why it only works for dogs who are happy and confident when they start whining. And it won’t work to change the behavior of a dog who is whining because they’re anxious or distressed.

The simplest way to stop your dog whining for attention is to start ignoring it! Rather than waiting for your dog to try and attract your attention, have a plan for the day, including times for training, playing games, and exercise. Outside of these times, make a concerted effort not to react to whining. At all.

If your Lab is used to getting attention when they whine, then their first response to it not working is likely to be whining louder and harder. But if it never works again, they will eventually give up. This is called behavior extinction. Meanwhile, you can also:

Helping A Dog Who Whines Due To Fear Or Anxiety

If your Lab whines to appease people or other dogs, or because they have separation anxiety, the only way to stop them whining is by changing how they feel about the situations they whine in.

Appeasement whining is linked to lack of confidence. Dogs who are well socialized as puppies may be less likely to use this kind of vocalization. Older dogs can still be socialized to feel more confident in new situations too, and we’ve got tips and advice about that here. The ASPCA also suggests teaching your dog how to do a job (such as gundog training for a Labrador) or taking them to dog sports such as agility to build up their confidence.

Separation anxiety can be stressful to deal with. It can also make your world feel very small, if you can’t go out without upsetting your dog. Pippa has written about identifying and treating separation anxiety in this article. If your dog has separation anxiety, you might also want to consider seeking professional advice tailored to them, and their situation.

When To Get Professional Help For A Dog Constantly Whining

If your Labrador is whining all the time, ask their vet to check them over. Firstly they will want to rule our possible sources of pain. If they conclude that your Lab is whining to express something about their emotional state, they might:

Examples of medicines prescribed to reduce anxiety-related behaviors such as whining include clomipramine, and fluoxetine (branded as Reconcile for dogs, and better known as Prozac when administered to humans). Over the counter remedies which might reduce anxious whining include diffusers and collars which contain dog appeasing pheromone – Adaptil being one of the best known brands.

Labradors may whine for several reasons. An important rule of communication is that the communicator must believe it is going to bring about some kind of reward or improvement in their circumstances. So looking for that benefit is a sure fire path to establishing why your dog is whining, and then reducing how frequently they do it.

To chat with other Labrador owners and swap notes about whining and other behaviors, whine not join us on our forum?

Mariti. Dog attachment to man: A comparison between pet and working dogs. Journal of Veterinary Behavior. 2013.