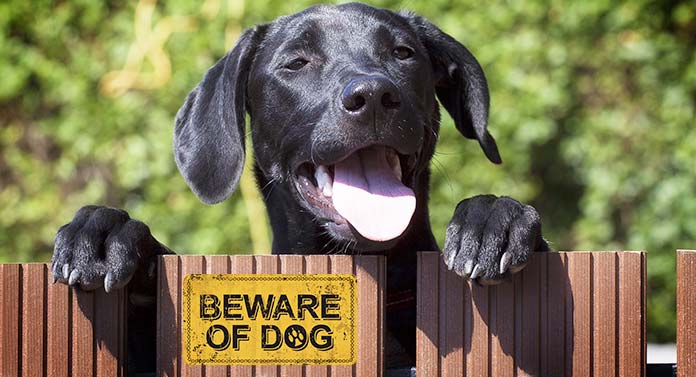 Lots of people trying to choose the right dog for them want to know: are Labradors protective? Labrador Retrievers are not typically considered protective in the same way that traditional guarding breeds are. They may try to protect their household from things they view as a threat. But to the open-hearted Lab, not many encounters fall into the category of “threatening”.

In this article, we take a look at Labradors’ protective instincts, and whether they can ever be harnessed to make them good guard dogs.

To answer this more fully, it helps to clarify what we mean by protective behavior in dogs. Dogs are a social species – their wild ancestors lived together in packs. Large, strong members of the pack would protect weak or vulnerable members (such as infants and pregnant or nursing females) against threats from opportunistic predators. Protecting each other was good for survival, because a larger pack has more hunters to find food, more females to bear the next generation, etc. 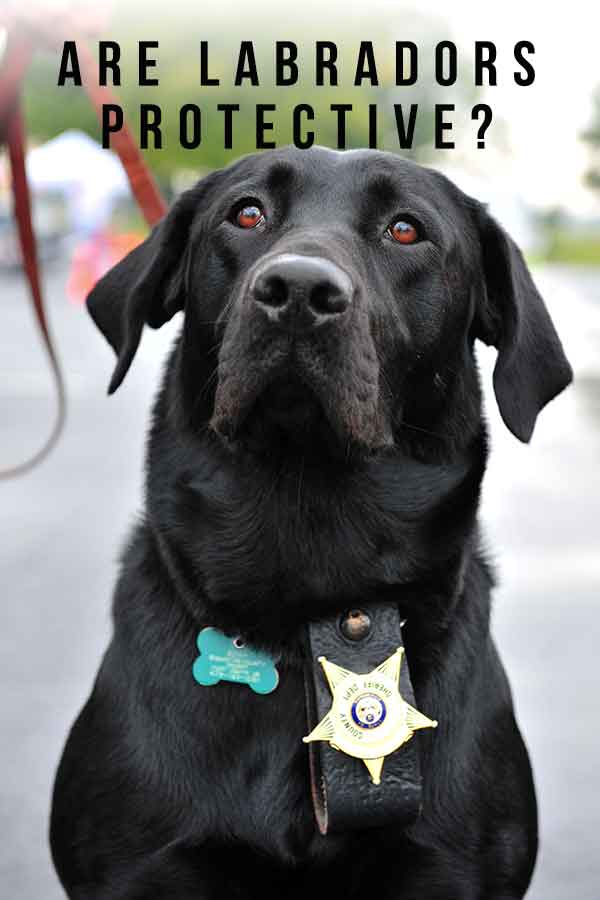 In our homes, domestic dogs are likely to identify the humans and other dogs that they live with as members of their “pack”. So they may try to protect them against things they perceive as a threat, such as unfamiliar visitors.

Are All Dogs Protective?

An easy mistake to make is confusing protective behavior with possessive behavior. Many dogs, including Labs, guard resources which they perceive as having a high value. And sometimes dogs protecting their family are mistakenly described as resource guarding them. However, some vets are concerned about including humans in the list of things which can be resource guarded. Because possessive aggression and protective aggression are two different things.

Do Labradors Protect Their Owners?

Labradors are not widely regarded as strong candidates for human-protection roles. In fact some evidence, such as this Dutch study, indicates that Labradors are more likely to be protective of their home or territory than their owner. This is not necessarily a bad thing.

Excessive protection of their owner is one of the most common behavior problems reported by dog owners. And it can be time consuming and frustrating to overcome, not to mention expensive in trainer and behaviorist fees. But to understand why Labs aren’t very protective, it helps to understand what motivates a dog to behave protectively in the first place.

Controlled protective behavior in dogs is actually very difficult to teach. Most dogs which perform successfully in guardian roles actually come from breeds which have a hereditary instinct to behave protectively hardwired into them. Such breeds include German Shepherd Dogs and the Mastiff breeds. Their protective instincts are closely linked to an innate mistrust of unfamiliar people, animals and things.

In practice, when people train GSDs and Mastiff to work as livestock guardians, they do it by encouraging their puppy to form strong social bonds with their herd at a young age, through careful socialization. As they mature, their handler also rewards them for being attentive to the whereabouts of their herd, and what’s going around them. Finally, behaving protectively of the herd follows as a natural combination of being bonded and attentive to them, and wary of everything else – it doesn’t need to be taught.

Can You Train A Lab To Be Protective?

On the other hand, Labradors don’t have the same wariness of unfamiliar things written into their DNA. Genetically, they are very distinct from the traditional guardian breeds in this respect.

A Labrador will easily complete the first part of training – forming social bonds with their family or some other animals. The friendly Lab excels at this! They can also be taught attentiveness, by rewarding it with positive reinforcement techniques. But they are less likely to instinctively distrust unfamiliar people or intruders. So they don’t perceive anything to protect against. In fact they’ll probably just try and say hello!

Labradors are also less likely to react protectively against things which they do perceive as a threat. For example, they may respond fearfully instead.

Just because they’re generally receptive to meeting new people, doesn’t mean that all Labradors are guaranteed to be happy around everyone they meet. Even placid dogs can be wary of new people in their home if they weren’t socialized well as a puppy, or have had bad experiences with intruders in the past, or if they are startled.

A Labrador may react then aggressively to an intruder either because some protective instincts within them have been triggered, or because they are frightened. However, aggression should always be a dog’s last resort. Before they attack, dogs perform several behaviors to communicate that they’re uncomfortable about someone’s presence. Including:

But they might skip some of these signals if they have been punished for them in the past, or the intruder ignores them and presses ahead quicker than they are comfortable with. Which is why it’s important to never punish a growl or other sign that your dog is uncomfortable. And never pressure them into an interaction they “should” be happy with “because they’re a Lab”.

Yes! Protective behavior in dogs is largely a reflection of how dogs feel about unfamiliar people and animals. It’s not a reflection of how they feel about you. So even a Labrador completely devoid of protective instincts can be completely loving and unswervingly loyal to their owner. If you treat your Labrador kindly and ensure all their needs are met, you’ll witness their loyalty in the way they seek out your company and dash back at the sound of their recall cue.

Protective behavior in dogs is largely instinctive, and not easily taught. Labrador Retrievers are not one of the cluster of closely related dog breeds associated with strong protective instincts. However, they are loving and loyal dogs, and given their size, it’s likely that you’ll feel safe just for having one nearby anyway!

Has your Labrador acted as your gallant protector in the past? Or are you struggling with unwanted or misplaced protective aggression? Either way, we’d love to meet you on our forum, where Labrador owners from all over the world swapp experiences, tips, and advice!