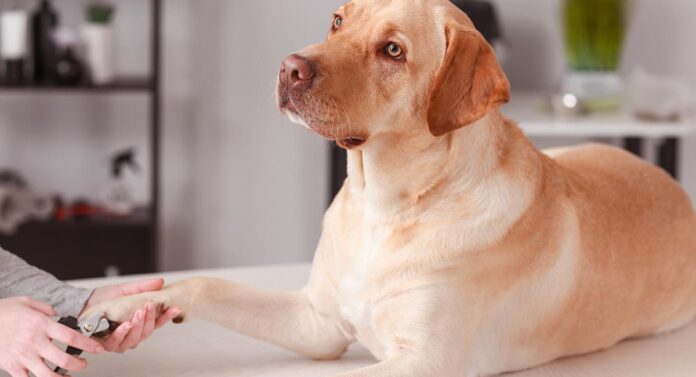 Knowing how to stop a dog’s nail from bleeding is an important part of their emergency care. Today we’ll look at various ways they might have hurt themselves including nail damage, fungal infections and accidents when clipping their nails. And share top tips for how to stop a dog’s nail from bleeding whatever the cause. We’ll look at compression, styptic powder and even super glue as solutions, and help you avoid their nails bleeding again in future with our care and nail clipping guides.

Nothing is worse than seeing your beloved pooch in pain, and if an injury is responsible, the sight of blood may cause you to panic. Do you know how to stop a dog’s nail from bleeding? Of course, you’ll want to do what’s best for your canine companion, and that means providing quick, safe, and adequate treatment as soon as possible. Blood coming from a nail is actually quite common. In this guide, we’ll tell you how to stop dog nail bleeding. But first, let’s look at some of the causes of dog nail bleeding.

Why Do Dog Nails Bleed?

The anatomy of the canine nail is actually quite different from that of a human. Humans have a nail bed, plate, and root that are all firmly secured to each finger and only the overgrown plate can be easily accessed and trimmed. In fact, dogs don’t have nails but claws that protrude directly from a small bone on each “finger.” These bones, called unguicular processes, are covered by a fleshy quick and hard nail.

The quick of each claw contains small blood vessels and nerves that provide nutrition and sensations so the nails can grow and grip. The outer nail coating is made from a strong material called keratin, which wears away as your canine walks along hard surfaces. The bone, quick, and nail all protrude from the nail bed, making every part of your dog’s claw easily accessible. This is certainly beneficial if your dog’s nails grow a bit too long and you need to trim them.

However, as a result, it’s relatively easy to cut through the quick and if you do this, you may see some blood. Dog nail bleeding can also occur if the keratin wears away a bit too much and the quick becomes exposed. This is a common occurrence if your dog spends a lot of time walking on concrete and a canine with brittle nails may also be prone to breaks and bleeding.

How To Stop A Dog’s Nail From Bleeding With Compression

So, your dog’s nail is bleeding. What now? Well, you should try to stop the bleeding if you can. Before you start, bear in mind that the quick is extremely sensitive. If you’ve ever cut your own nail too short or accidentally slammed your finger in a drawer, you know injuring this area of the body can produce quite a lot of pain. And the nerves are just as active, maybe even more so, underneath your canine’s nails.

Therefore, keeping your dog calm as you stop the bleeding is extremely important. You may need someone to help hold your dog as you work. Also, make sure to use gentle pressure so you don’t cause your canine even more pain.

Start by using a clean cotton cloth and place direct pressure on the bleeding nail. Gently press the cloth against the nail for about two minutes. It takes approximately 2-4 minutes for a canine’s blood to clot. So, if the nail is still bleeding, try compressing for another two minutes. Be patient, set a timer, and check for bleeding only once the timer sounds.

If you’ve compressed the wound and the bleeding just won’t stop, you could also try some powder to aid coagulation. This will also help to create a scab so the nail does not bleed again once your canine starts walking around. In a pinch, you can use a bit of cornstarch on the nail. Studies have shown that potato starch also works quite well to coagulate blood, if you have some handy.

Styptic powder works best to stop dogs’ nails bleeding. It constricts the blood vessels so clots and scabs can form. This is your best option. You can prepare well and have some available just in case this situation arises. The powder can be purchased at your local pet store and used for minor cuts and scrapes.

Place a small amount of starch or styptic powder in the palm of your hand and then dip the bleeding nail into it. If the nail still continues to bleed a small amount after the use of a compress and powder, you could also try closing the wound with a small bit of super glue.

The super glue method is not as strange as it may sound. In fact, cyanoacrylate, the active ingredient in super glue, is often used to close surgical wounds. So don’t worry, this can really be a useful way to stop dog nail bleeding. Even oral incisions are closed with glue, so it’s safe for use on your dog. Just make sure that your canine doesn’t ingest any of the glue before it sets.

Learning to close the wound is an important step in stopping a dog’s nail from bleeding and to avoid any further injuries.

One word of caution. When using any product that hasn’t specifically been designed for use in canines, it’s important to take a look at the ingredients. This goes for food, medical products and everything else. If there are other ingredients than cyanoacrylate make sure you find out if they can be used safely on a wound. 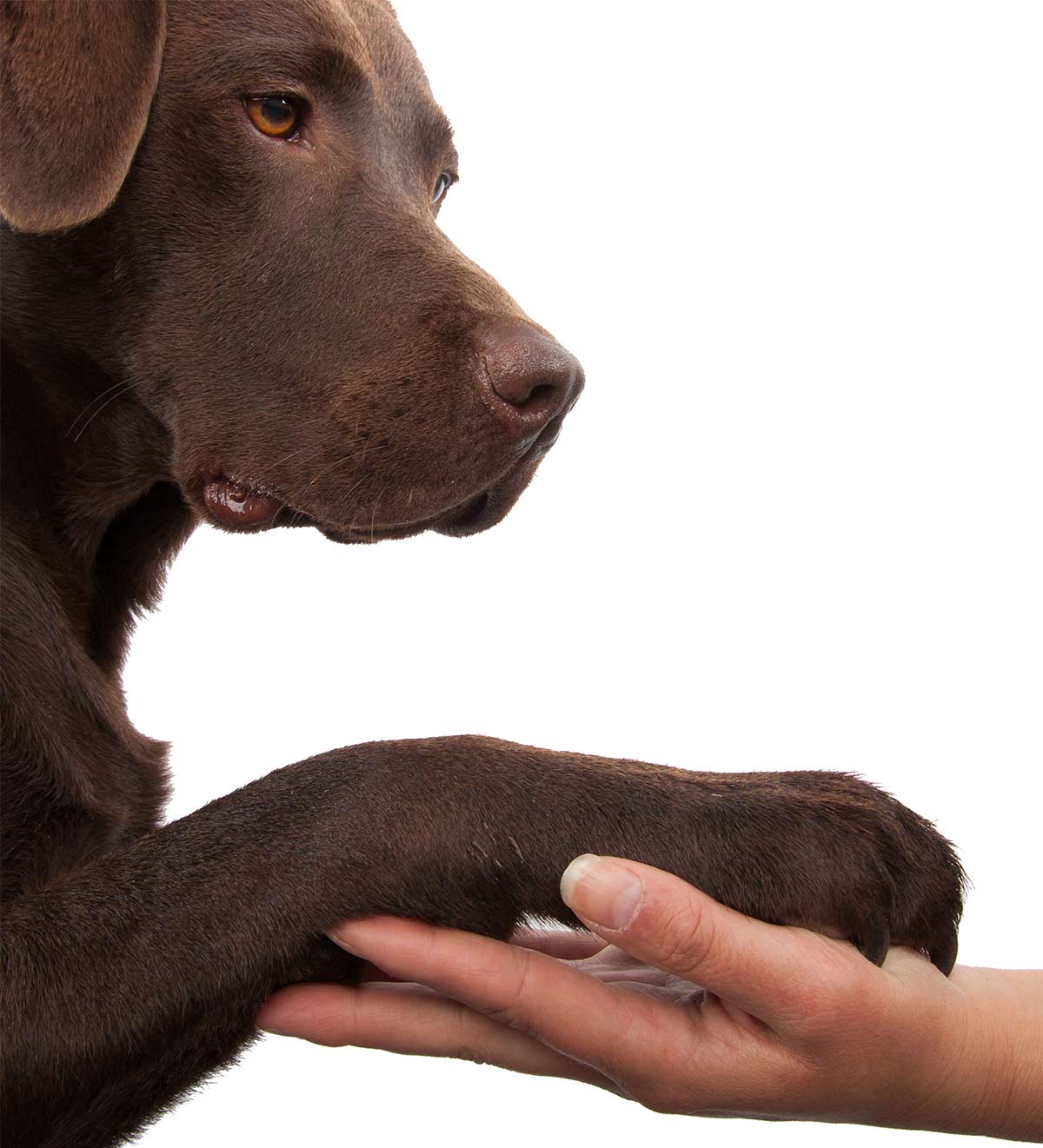 Whereas minor nail bleeding issues can be handled at home, some circumstances require taking your pup to a veterinarian. If your canine catches their nail on the sidewalk during a walk or you inadvertently cut the nail at the base, the wound may bleed quite substantially.

If this happens, wrap the nail in a cotton cloth, apply pressure, and quickly make arrangements for an emergency visit to the vet. Don’t remove the cloth after 2-4 minutes like you normally would for a minor injury. It’s also a good idea to consult your dog’s vet if you notice a minor cut that won’t stop bleeding.

Some canines can have congenital or acquired clotting disorders and unfortunately, you may have no idea there is a problem until your dog is injured. This is why we say that some dog nail bleeding can be indicative of further complications. Clotting disorders, like hemophilia, can be serious. It’s important to stop dog nail bleeding but it’s also important to know why it’s bleeding in the first place.

The good news is that your canine can be treated with an intravenous transfusion of blood plasma (a frozen blood product) to clot the wound. Afterward, tests can be performed on your pooch to find out which clotting factor your canine is missing. Then your dog can receive the treatment they need to avoid any bleeding issues in the future.

Perhaps you’ve just been out with your dog. You’ve just come home and thought “hey my dog’s nail is bleeding” If you notice your dog’s nail bleeding after a walk, there’s a good chance your dog has brittle nails. Try walking your dog on soft ground instead of sidewalks and roads. Also, speak to your dog’s vets about possible nutritional deficiencies that could be causing brittle nails and dog nail bleeding.

Veterinarians can test for vitamin deficiencies and investigate any gastrointestinal issues that may be causing poor absorption of nutrients. If your pup does have a deficiency, the vet can recommend supplements or specific high-quality dog foods.

In addition, some types of fungal, yeast, and immune system disorders can cause brittle nails. Fungal infections are especially common. But thankfully, the problem is not a serious one. Both antifungal medication and fish oil have been found to effectively treat the issue. Or you could ask your dog’s vet to recommend a medication or supplement that is best.

Once you’ve learned how to stop a dog’s nail from bleeding, you should keep an eye on the nail for a few days to make sure it doesn’t start bleeding again. Also, try to keep your dog calm and quiet for at least an hour or two after the initial incident to help with coagulation and allow the scab to solidify.

Now that you’ve learned how to stop a dog’s nail from bleeding, treated your pup, and been traumatized by the sad puppy eyes and whimpering… You’ll certainly want to avoid any future nail cutting incidents. You can still cut your dog’s nails, but care should always be taken when doing so.

Use the right type of clippers made specifically for cutting dog nails and make sure they are the correct size for your canine. Also, make sure to use the correct method to avoid nail bleeding. Most importantly, identify the quick first, so you can safely cut above it. The quick will look dark since it contains a vast blood supply, so simply cut a few millimeters above to make sure you don’t crush the nail.

Sharpening your trimmers or using a brand new pair of clippers can reduce crushing and breakages. If you can’t see the quick—perhaps your canine has dark nails—then only cut a small sliver from each claw. Also, only trim when required—you’ll hear the telltale click-clack of your dog’s long nails hitting the floor when it’s time.

If you see your dog’s nail bleeding, don’t worry! A bleeding nail is a common issue among canines. Scraped nails that break during walks and nails that are cut too short are likely to bleed. Thankfully, bleeding caused by cutting your dog’s nails too short can be stopped fairly easily. In most cases you can solve that problem by applying a little pressure or with the help of some styptic powder.

Perhaps your dog’s nail won’t stop bleeding and you might feel that it’s an emergency situation. In that case, or if you think that something else may be going on, be sure to consult your dog’s vet. A vet can treat your dog and test for other ailments that may be causing bleeding or brittle nail issues.

As we’ve outlined above, there can be some serious underlying reasons why your dog’s nail is bleeding. You might learn that it’s because he has brittle nails. However, if you are worried that there is something more serious going on, don’t hesitate to contact your vet. The same applies in cases when there is a significant amount of blood or your dog’s wound will not heal. Your vet would much rather you contacted them sooner rather than later!

What do you think?

And if you’d like to read more about dogs, take a look at our informative guide to dog whiskers!