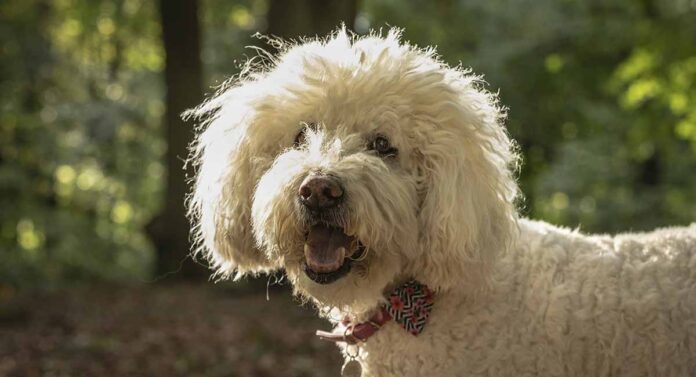 Labradoodle lifespan will vary depending on the dog’s Poodle parent. Each Labradoodle is a cross between a Poodle and a Labrador, but Poodles come in three different sizes, Standard, Miniature, and Toy. These smart, active and energetic canines each have different health attributes and character traits, with smaller poodles living longer than standards or Labs.

While it’s true that on average, cross breeds outlive most pure breeds, it isn’t just parentage that influences life expectancy. We’ll be looking at the other factors that affect Labradoodle lifespan, such as exercise, nutrition, and calorie intake. And we’ll be giving you some great tips to help your family friendly Labradoodle live as long as possible.

Owners can secure extra years of Labradoodle lifespan by keeping their Doodles at a healthy weight and providing lots of mental and physical exercise. The Labradoodle puppies in this video are getting off to a great start !

We don’t have as much evidence for longevity and health in Labradoodles as we do for Labradors and Poodles. There are years of data for many purebred dogs but designer dogs are a more recent introduction and we are only now beginning to get a clearer picture. So some of our assumptions about Labradoodle lifespan, are based on the parent breeds rather than on Labradoodles themselves.

How Long Do Labradoodles Live?

According to a study in 2010, Labrador Retrievers and Standard Poodles both live around 12 years. And labradors average just a few months more. Miniature Poodles and Toy Poodles both tend to live a little longer – up to 14 years old on average. This is true of most dog breeds: the smaller they are, the longer they live. So a Labradoodle with a Standard Poodle parent might live for twelve years, on average. But a Labradoodle with a Miniature Poodle parent has a higher chance of living longer.

Also, bear in mind that there are plenty of recorded instances of Labs and Poodles of all sizes living well into their late teens. And either parent with good longevity in their genes could pass this down to their puppies.

There are many arguments for and against deliberately crossing two distinct pedigrees. One of the most powerful arguments in favor of crossbreeding is that crossbred dogs live longer than their purebred counterparts. By up to 1.2 years according to one 2006 study. And this could give your Labradoodle the edge over either of their parents when it comes to longevity.

How To Increase Labradoodle Lifespan

Sometimes, the reasons one dog lives longer than another are out of our control. However, pups who are properly taken care of tend to live longer happier lives. Here are some things you can do to ensure your Labradoodle lives as long as possible.

You can actually begin setting your dog up for success before you even bring them home! Of course, this advice won’t apply to everyone. Maybe you’ve already purchased a Labradoodle puppy, or you’re looking to adopt a rescue dog. But if you are planning to buy from a breeder, make you do everything you can to support good breeding practices.

This means avoiding puppy mills at all costs. In these places, they are only concerned about profits and dogs are often mistreated and abused. You may also want to avoid pet stores since many of these dogs may come from puppy mills. If you don’t know what to look for in a breeder, here are a few things to keep in mind.

How to Choose a Reputable Breeder

First, you’ll want to go there directly to them. That way, you can see where the dogs are kept. The housing environment should include all essentials: a clean space, water, and room to run. If everything looks alright from the outside, the next step is to speak with the breeder. Don’t be afraid to ask questions!

One of the most important things you’ll want to know is that their dogs are vetted. Parents and puppies should be up-to-date on vaccines and screened for common health concerns. If the breeder does not meet these requirements or denies you information about your pup’s ancestry, walk away and find a new breeder.

Take Your Labradoodle for Regular Check-Ups

It’s important to go to your veterinarian regularly, even if your dog is perfectly healthy. This can help you prevent some illnesses and catch health problems early on. While you’re at the veterinarian, you should keep your dog up to date on their vaccines. Also, keep them on flea and heartworm preventative.

Labradoodles should be fed a balanced diet. Importantly, they should not be given too little or too much food, as both can decrease the Labradoodle lifespan. One 2018 study found that overweight dogs died on average 2.5 years sooner than their healthy-weight counterparts.

If you’re unsure what brand of food to feed your dog, or how many calories they should be eating, you can ask your veterinarian for help! Labradors, in particular, are prone to obesity. Many have a genetic mutation which means they cannot tell when they are full, and they can pass this on to their puppies.

Give Your Labradoodle Plenty of Exercise

Labradoodles are big, active dogs and need plenty of exercising to stay happy and healthy. This includes a daily walk and lots of playtime. They also appreciate having a yard to run around in by themselves, or to play a fun game of fetch in! With their water-loving ancestry, they also enjoy a good swim. Like with people, dogs who get their energy out are in better spirits, better shape, and they live longer.

Pay Attention to Your Labradoodle

Along with taking care of their basic needs and exercising them regularly, keeping an eye on your dog every day is one of the best things you can do for their health. Sometimes, one of the first symptoms you’ll notice is a change in behavior. If your dog becomes less active, doesn’t finish their food, or is simply acting strange, these can all be signs to get them into the veterinarian for a check-up. But you won’t spot these issues unless you’re paying attention!

Several health problems can impact Labradoodle lifespan. As we discussed above, some of these can be prevented by breeding healthy dogs so hereditary illnesses aren’t passed down. Others can be prevented, or at least treated, by regular check-ups and help from your veterinarian.

Hip dysplasia occurs when a dog’s hip socket doesn’t form properly. It’s common in large dog breeds such as Labradoodles and can lead to arthritis or the inability to walk. Whilst it isn’t lethal by itself, severe cases of hip dysplasia can cause so much pain and loss of quality of life. Eventually, euthanasia becomes the kindest option. To minimize the possibility of this happening, only purchase a Labradoodle puppy from health tested parents with good hip scores.

Labradoodles are prone to eye diseases including

Loss of vision isn’t necessarily life-threatening by itself. But can put your dog at greater risk of accidents if they don’t see a hazard in time. To keep them safe, you’ll need to be their eyes for them at all times.

Bloat is a condition where food and gas become trapped in the stomach. This is dangerous and must be corrected surgically. If bloat is left untreated, your dog will die.

Hypothyroidism or hyperthyroidism can occur if the thyroid gland doesn’t produce enough or produces too much of the thyroid hormone, respectively. Labradoodles can develop either of these problems. Both affect a dog’s metabolism. And if left untreated, can pave the way for other life-threatening conditions to set in.

Fortunately, with early veterinary intervention, these conditions can be managed, and need not have any effect on Labradoodle lifespan.

Addison’s disease is when a dog’s adrenal glands don’t produce enough cortisol. It is most common in middle aged female dogs, and left untreated it can caused damage to the kidneys and eventually be fatal. Luckily though, when caught early, it is easily managed and doesn’t affect overall lifespan.

Like humans, dogs can develop cancer. If you notice any lumps on your dog, don’t panic right away. But do bring your dog to the veterinarian. Unfortunately, Labradors are prone to tumors, but they aren’t always malignant, or cancerous. However, it’s best to be safe and catch it early if you can.

How Old Is Your Labradoodle?

Do you have a very old Labradoodle? What do you think has been the key to their long life? Tell us in the comments!