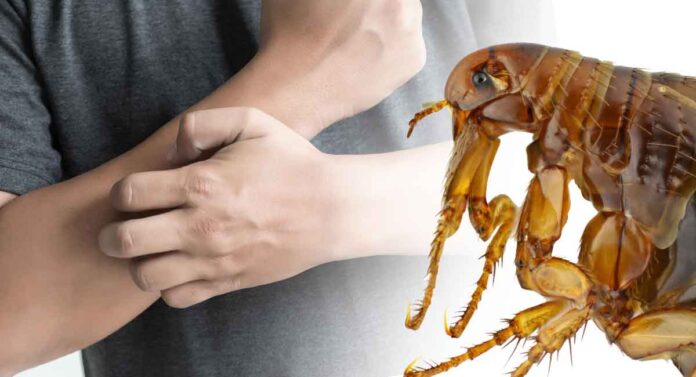 Can fleas live on humans? Common flea species do not typically live on humans. Fleas have “preferred hosts” that they like to feed on. Most fleas do not prefer human hosts. Additionally, fleas are designed to live in forests of dense animal fur. As humans, our relatively hairless bodies do not make for the best dwelling places for fleas.

However, some fleas can live in human hair for a time. But they cannot reproduce on humans. So, a temporary flea infestation is remotely possible. But it will be for a short period at worst.

Did you know that most of the fleas which infest dogs are Ctenocephalides felis species – cat fleas! One study found that cat fleas could survive on human blood alone – but the nutrition they received was insufficient to actually reproduce. Outside of a laboratory setting, it would be extremely rare for fleas to choose to stay on a host where reproduction was impossible.

With that said, there are a LOT of different varieties of fleas, and some can live on humans. There are a few relatively common species (such as Pulex irritans) that could temporarily live on humans, but these species of fleas are uncommon outside of rural farms.

More worrisome are varieties like Chigoe fleas (known by their scientific names as Tunga penetrans and Tunga trimamillata). Chigoe fleas can live on humans, and can actually burrow into the skin, causing various health concerns. However, Chigoe fleas are only really an issue in Latin America and Sub-Saharan Africa. If you live outside of these areas, there’s no need to worry about Chigoe fleas.

The average person reading this article is unlikely to ever come into contact with a human-infesting flea variety. So, fleas shouldn’t be a concern for humans, right?

Just because fleas don’t usually live on humans doesn’t mean they can’t cause some issues. Flea bites on humans are common in households with pets. But how does this happen? Well, fleas can make their way from infested pets onto furniture, rugs, carpets, etc. where they can eventually end up on humans.

Human blood is not a preferred source of sustenance for the common flea. But a hungry flea is a hungry flea. And given the opportunity, they will absolutely bite a human. This is common when flea infestations get out of hand.

Fleas multiply rapidly, and if left untreated soon enough you’ll have hundreds or even thousands of fleas all competing for your poor dog’s or cat’s blood. As competition increases, fleas are more likely to resort to biting humans. Flea bites on humans are most common around the feet and ankles, but they are possible anywhere.

Before it gets to this point, make sure you do all you can to get rid of your dog’s fleas. Luckily though, fleas do not typically cause serious problems for humans, beyond some itchy annoyance.

The Dangers of Flea Bites

If you do get bitten by a flea, should you worry about it? In most cases, fleas on humans will not cause serious health concerns. The most common issues are minor itchiness and potentially minor swelling. Some people are allergic to flea bites, which can magnify the itchiness and swelling.

While more serious health problems are possible as a result of flea bites on humans, they are less common. Fleas can transmit diseases including typhus and even plague.

Do all Fleas Carry Diseases?

The probability of fleas carrying a disease varies depending on the species of flea. Unfortunately, it’s difficult to tell what type of fleas your animals have. It depends where you live, and what other animals are around your area.

Fleas can also transmit diseases from other animals to your pets. In some cases, these diseases can then become a threat to humans, too. Cat scratch fever is one example. Fleas can transmit the disease from other infected animals. And in some cases, your cat could pass it by scratching you. Overall, though, the transmission of diseases from fleas is not common. It shouldn’t be a primary concern, but it’s something to keep in mind.

There are thousands of types of fleas out in the world, with each having different characteristics, preferred hosts, etc. That being said, the most common varieties in North America that you’ll come across are mostly “cat fleas” (Ctenocephalides felis) and “dog fleas” (Ctenocephalides canis). Cat fleas are the most common, by far, and despite the name, they are just as likely to infest dogs than they are to affect cats.

There is one type of flea (Pulex irritans) that are sometimes referred to as the “human flea”. However, this variety is mostly associated with wildlife and occasionally domesticated pigs. They are very rare in the developed world.

Is This Flea Specific to Humans?

A 2010 study on fleas and flea-borne diseases noted that “There is no flea specific to humans, and only a fraction of all fleas come into contact with humans on a regular basis”. So, the term “human flea” is a bit misleading! Can fleas live on humans, when it comes to some of these rare varieties? Yes, in some cases. But again, these are rare flea species that are very uncommon in domestic situations.

If you’re wondering whether humans get fleas, you may also be wondering if there’s a good flea treatment for humans. When it comes to dog fleas on humans—or the more common cat fleas on humans—in general, treatment is not necessary. Since fleas don’t typically live on humans, the issue is normally just an annoyance in the form of a few itchy bites.

Is it necessary to use flea shampoo or flea repellent on humans? If you know there are fleas in your home, it’s wise to take some precautions. You should perform a deep clean of your living space and wash sheets, bedding, towels, etc. And of course, attack the source of the fleas by treating your pets with approved flea medications. If you find yourself getting flea bites, there are some steps you can take.

What Should You Do?

There is no flea shampoo specifically for humans, but shampoos intended for lice and other human pests can help. You can also prepare a paste of baking soda and water, and spread it in your hair for around 10 minutes. Shampoos that contain tea tree oil are also effective for killing fleas.

In terms of flea repellent for humans, this is not necessary for a household setting. If you’re trekking in the Amazon Rainforest, that’s a different story – and a different article altogether!

Can Fleas Live on Humans: Conclusion

Rare species of fleas can live on humans, although these are not the fleas that you’ll commonly find affecting your pets. Even so, flea bites can cause problems for you and your pets. So, if you notice any flea activity in your household, you should immediately take steps to address it.

Have you had any experience with fleas on humans? We’d love to hear your advice in the comments below.

If you want to learn more about fleas, make sure to check out the following articles:

Eisele M et al. 2003. Investigations on the biology, epidemiology, pathology and control of Tunga penetrans in Brazil: I. Natural history of tungiasis in man. Parasitology Research.