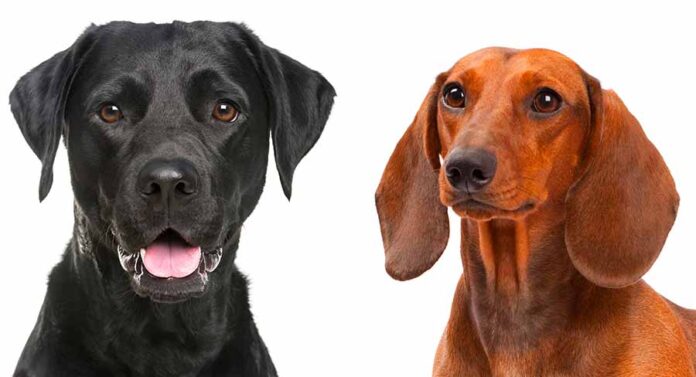 The Dachshund Lab mix is an unusual and uncommon crossbreed. Also commonly known as the Dachsador, this mix has only started gaining traction over the past few years, with the rise of the mixed breed trend. The appearance and personality of resulting puppies can really vary, since the two parent dogs are so different. So, owners must be prepared for any outcome! Just because you’ve seen cute Dachshund Lab mix pictures online doesn’t mean all Dachsador puppies will look like that!

As well as appearance and personality, the exercise needs of this mix will vary. And, they can be prone to a number of very serious health conditions. So, it’s important that you do plenty of research before deciding to welcome a Dachshund Lab mix into the family. Let’s start off with some quick stats about this cross.

About the Dachshund Lab Mix

History of the Dachshund Labrador Mix

This uncommon mixed breed is quite a recent cross. Although many modern mixes have been around unofficially for a long time, this is unlikely for Dachsadors, simply because of the size difference between the parents. Most modern Lab Dachshund mix puppies are created through artificial insemination. So, accidental breeding is rare.

It’s likely that these two dogs were first bred as a result of the modern trend for mixed breed dogs, fronted by the ever-popular Labradoodle. Labradors are popular contenders for mixed breed puppy parents, as their temperament makes them such a good family companion. The Dachshund is usually favoured by breeders and potential owners because of its appearance. So, many Dachshador breeders hope to create a puppy with a Doxie appearance, but the friendly Lab temperament.

In reality, it doesn’t always work out this way! So, let’s take a look at the traits these interesting dogs can inherit. 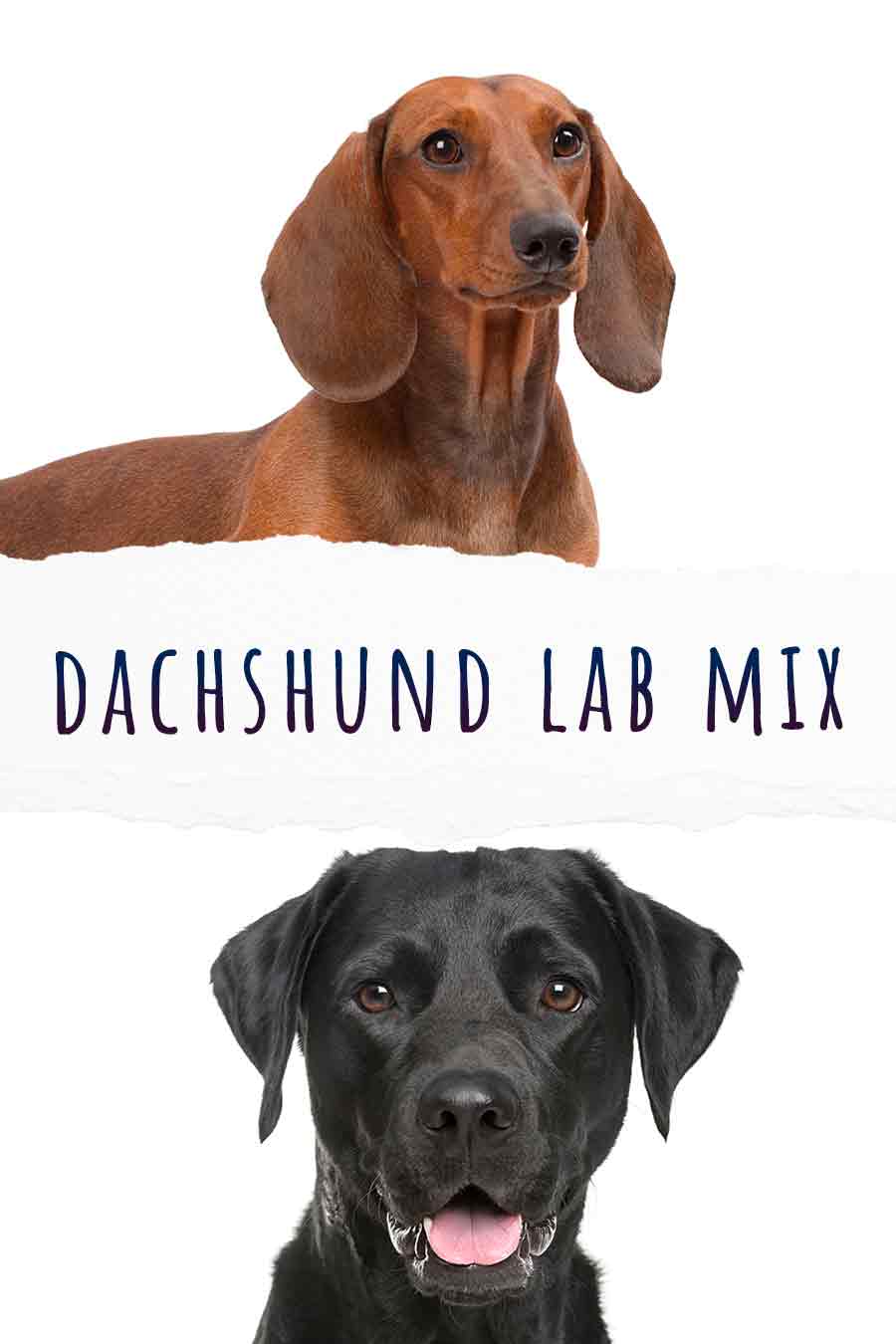 The parents of this mix have very different appearances. So, resulting mixed breed puppies can look very different from one another. Some might favor the purebred Dachshund, whilst others favor the purebred Labrador Retriever. Others might be a perfect mix of the two. But, the traits they inherit can be very unpredictable. So, don’t expect your puppy to look exactly like pictures of Doxie Lab mixes you’ve seen online. The best way to predict your puppy’s appearance is to look at the specific parents, which will show the traits your puppy might inherit.

How Big Do Dachshund Lab Mixes Get?

Size is just one area where these mixed breed puppies can really vary. Depending on which parent they favor, puppies can grow to be as small as an adult Dachshund, or as large as a full grown Labrador. In reality, most will be somewhere in between the two at their largest, but owners should be prepared for any outcome. Here are the extremes you might expect:

So, a full grown Dachshund Lab mix can realistically fit any of the above heights and weights. It can even vary within a single litter. Dachshunds have long backs and short legs, which this mix may inherit. But, there’s no guarantee. Some will be more Lab-like in their structure.

The Labrador has a double layered coat with dense, water-resistant fur. In contrast, Dachshunds can have three coat types: smooth, longhaired, or wirehaired. Smooth Dachshunds have short, glossy coats, longhaired varieties have longer, wavier fur, and wirehaired varieties have coarse fur that is short over most of their body, but longer around their jaw, eyebrows, and ears.

In terms of color, the Lab is available in black, chocolate, or yellow solid shades. Some Labs have mismarks, or even dilute fur, but most will be one of the three standard colors. Dachshunds are much more varied, with more unusual patterns like brindle and dapple also popular. This mix could inherit any of this coloring. So, take a look at the specific parents bred to get a better idea of what to expect from a puppy.

Like appearance, the temperament of these mixed breed dogs will vary. The Lab and Dachshund have very different personalities, and a crossbred puppy could be like either purebred parent! Some traits are shared by both, making it more likely your puppy will inherit them. For instance, both the Labrador and the Dachshund are intelligent dogs. So, puppies will need high levels of mental stimulation to prevent boredom and destructive behaviors.

On top of this, both are likely to form very strong bonds with their close family. But, the way this is expressed may differ. Labs tend to love everyone, as well as their family. But, Dachshunds are more often territorial over their family members, which can lead to aggression.

Studies into dog aggression have shown that the Labrador is usually very low in aggression towards owners, strangers, and other dogs. However, the same studies have found that Dachshunds are among the most aggressive, in all of the same categories. Dachshunds are originally hunting dogs, so there’s also a chance they will be reactive to small pets around the home, like cats, rabbits, and more.

This doesn’t mean that every Dachshund Lab mix will be aggressive. But, it does mean there’s more of a reason for you to socialize your puppy well from a young age. This will encourage them to grow into happy, confident adults, and reduce any fear based aggression. As adults, this mix may still be wary around strangers, but will be much less likely to be aggressive.

Both the Labrador and Dachshund breeds are very intelligent, so can pick up training quickly. However, Dachshunds can have an independent streak. If this passes to your puppy, training can take a little longer. Positive reinforcement methods are the best way to work with your dog and reduce the risk of any stubbornness. Avoid punishment techniques, as these can actually result in aggression and regression in training!

Potty training can be an issue for some Lab Dachshund mixes, so be sure to stay patient and consistent with your methods.

The exercise needs of these dogs will vary from one to the next. Those with longer legs and shorter backs, like the Lab will be able to partake in a broader range of exercise styles. But, dogs with the short legs and long back of the Dachshund should avoid jumping and rough play. They may struggle with swimming and pulling themselves out of the water. So, be sure to play to your dog’s strengths when exercising.

Your puppy will be at risk of hereditary health problems, but also problems related to their conformation. Both the Labrador and Dachshund have a number of common issues that can pass down to their puppies. But, the Dachshund’s long back can also present problems. The more your mix puppy is like their Dachshund parent, the more likely it is they will suffer from these issues. Choose a reputable breeder who health tests parent dogs before breeding to minimise the risk of any health issues.

Here are some of the most common health problems that the Labrador Retriever parent may pass on to a Dachshund Labrador Mix puppy.

The Labrador is also prone to obesity, which can be problematic in dogs with long backs. So, make sure that you aren’t overfeeding a Dachshund Lab mix.

Here are some of the most common health problems that Dachshund parents can pass on to their mixed puppies, including issues relating to their body shape.

How Long Does This Mix Live?

Studies have shown that both the Labrador Retriever parent and the Dachshund parent live to an average age of 12 years. But, some individuals will live much longer than this! And, studies also suggest that mixed breed dogs tend to live longer than purebred dogs. So, you can expect a healthy puppy to live into their teens.

Alongside knowing about common health issues, it’s important for owners to learn how to groom their mixed breeds. As we know, these puppies can inherit any of the coat types from their two parent breeds. So, you should familiarise yourself with the appropriate coat type and learn how best to groom it.

Generally, the Dachshund Lab mix will be a moderate to high shedding dog. They are not hypoallergenic, and may trigger allergy symptoms in people that usually suffer from dog allergies.

When grooming, make sure you check your Doxie Lab mix’s ears and paws. Keep their nails trimmed to an appropriate length. You should do this from an early age so that your adult cross is happy around nail clippers or grinders.

Is a Dachshund Lab Mix a Good Family Dog?

For some families, the Dachshund Lab mix can be a good fit. However, these puppies can be very varied, so owners should be prepared to accept any potential outcome. Because of this, there’s no real way of knowing exactly how much space a dog will take up or what exact care they will need before they are at your home and fully grown.

Homes with very small children or other pets might not suit this mix, especially if the dog takes after its Dachshund parent. These dogs can be aggressive and territorial. So, owners must be ready to dedicate lots of time to socialization and training from a young age.

The Labrador Dachshund cross is still quite a new and uncommon mix. So, it might take you a while to find puppies. Especially since these two dogs aren’t easy to breed. More often than not, breeders will have to use artificial insemination. Not only is this more complex, but it can drive up the price of puppies. Just like certain coat colors can.

The price of this mix usually ranges between $1000 and $2000, but this may vary depending on demand and where you live. More important than anything else, make sure you’re choosing a reputable breeder. They should health test parent dogs before breeding, and exclude any dogs with health issues from their breeding programs. Make sure you see evidence of this when you visit to see the puppies. And, make sure to meet the mother dog. If possible, meet the Dachshund parent too, to gauge their personality. If they are overly aggressive, it may be better to look elsewhere for your puppy.

This interesting mix won’t suit all homes, and can face a lot of problems. Here are some alternative mixes to consider if you like some of the Dachshund Lab’s traits.

Labrador Dachshund mix puppies can be quite varied! So, you probably won’t know exactly what to expect until you see your pup in person. Do you have one of these dogs at home? Let us know what traits they inherited in the comments!