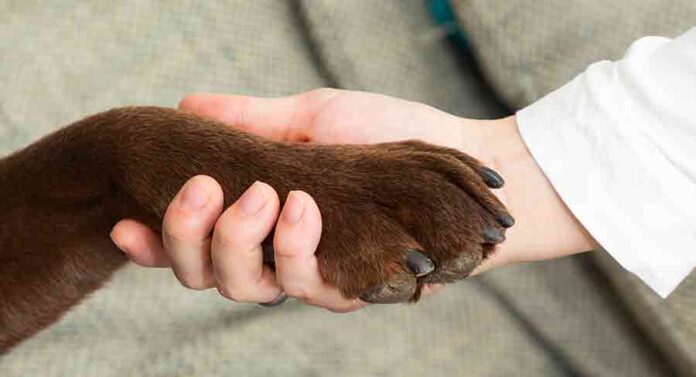 Labrador paws are pretty interesting parts of our Labs! Like many of their other features, Lab paws are perfectly suited to help them in their original working roles. Labrador Retriever paws are webbed, which helped their original ancestors swim to retrieve game for their fishermen owners. Labradors also have dew claws, which on their front legs, can help them climb out of water, and keep a good grip when running.

If you’re keen to learn more about your Lab’s paws and the best way to take care of them, you’re in the right place!

Let’s kick things off with some fun facts about Labrador paws. Some of these apply to other dog breeds too, but today we’re focusing on the Lab!

Do Labradors Have Webbed Toes?

Between your Labrador’s toes (but not their dew claw!), you will find a very thin membrane that connects each digit. So, yes, Labs do have webbed paws! Most dogs have this, but the membrane won’t be equally prominent on all breeds. In fact, the membrane can even look a little different from one Lab to the next. But, whether you examine black Labrador paws, chocolate Lab paws, or yellow Lab paws, you’ll find it!

This webbing helped our Labs’ ancestors in their initial retrieving roles. The earliest Labradors descend from fishermen’s dogs in Newfoundland. Here, these dogs were responsible for retrieving fish from the water, so needed to be proficient swimmers. The webbing between their paws helped with this, as did other traits like their coat type and their dew claws. 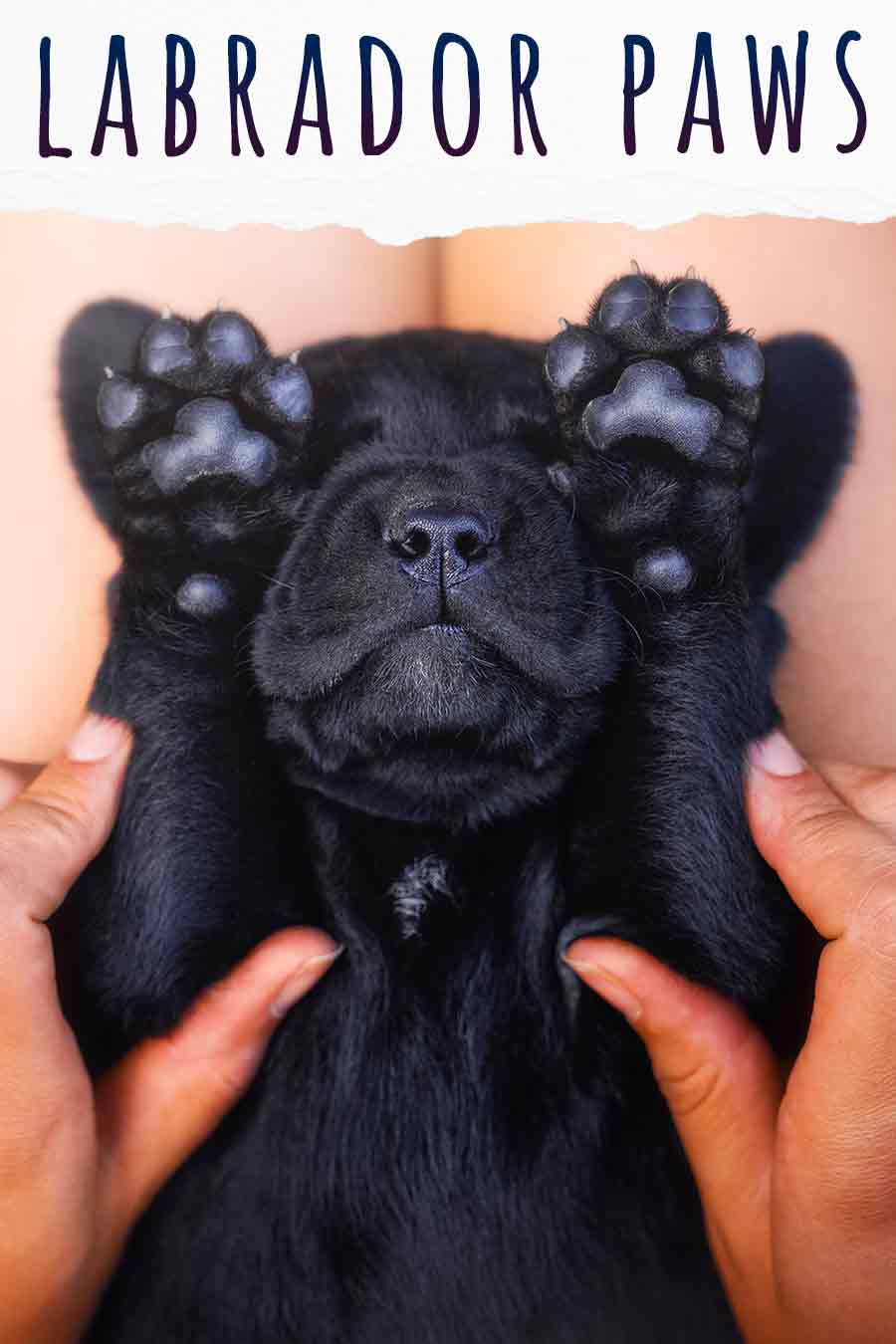 Labrador paws will be similar to any other dog. But, dog paws come in all shapes and sizes! The best way to see exactly what a Labrador paw looks like is to take a look at one up close in person. But, teaching your Lab to be happy having his or her paws touched can be quite a long process. Ideally, this should start in puppyhood, when you’re socializing your Lab and letting them experience the process of having their nails trimmed. But, it can still be done to older dogs – you just may need to move slower.

As we said earlier, Lab front paws have 5 digits, and their hind paws have 4 functional ones, possibly with a vestigial dew claw. On their front paws, digits 2 to 5 will be clustered together at the tip of your dog’s “foot”, and their dew claw will be higher up. When standing, their dew claw won’t touch the ground, but it will when they run or climb.

Lab paws look the same no matter what color your pup is. The only change will be the coloring of their fur and paw pads! Some yellow Labs might have lighter paw pads than their chocolate and black alternatives. Some Labs might even have black and pink patches over their pads! And, as we said earlier, some Labs will have a white spot on the underside of their paw, known as a Bolo mark.

What Does the Breed Standard Say?

The Labrador Retriever’s breed standard is another great tool for visualising what Labrador paws look like. Even the disqualifications! As these show the variation that can occur, even though these variations might not be preferred by breeders and judges.

The AKC Labrador breed standard states: “Feet are strong and compact, with well-arched toes and well-developed pads. Dew claws may be removed. Splayed feet, hare feet, knuckling over, or feet turning in or out are serious faults.”

Only the dew claws on your Labrador’s front two legs are functional. They are attached to the muscles in your Lab’s legs by four tendons. Although they don’t touch the ground when your Lab is standing still, studies have found that they make contact with the ground when dogs are running, and are used for instance when dogs are pulling themselves out of water. So, modern Labs can use these dew claws just as much as their earliest working ancestors!

The rear dew claws are not attached, and therefore are not functional. In fact, some Labs will have nothing more than a seemingly random claw or a flap of extra skin where their dew claws might be. Some breeders will actually remove dew claws from puppies, but the front dew claws will rarely be removed from Labradors, even those bred as show dogs. Having dew claws won’t penalise a Lab from show. But, neither will removing them.

Care for a Lab’s paws is more complex than just trimming their nails. Regular nail trimming is important to ensure your Lab’s nails never split or snap – which will be painful! If your Lab doesn’t like clippers, you may have more success with a grinder tool. Work with your Lab from a young age to ensure they are comfortable and happy with having their nails trimmed.

Other than nail care, it’s important to care for your Lab’s paw pads. If your Lab spends a lot of time outside, particularly exercising on hard surfaces, you should check their paw pads frequently for cuts and other injuries. If it is very cold where you live in the winter, you might even want to invest in some dog boots to protect your Lab’s paw pads from ice and snow.

You should also check between your Lab’s toes after trips out to the woods, or other rough terrains. Sometimes, thorns and other spiky things can get stuck between your Lab’s toes. This will be painful for your pup, and often quite difficult for them to remove themselves! If you ever notice your Lab limping, be sure to gently and thoroughly check their paws for any issues.

Our dog’s paws are interesting to learn about! Lab paws are perfectly suited for their original role as working, retrieving dogs. But, they can be just as useful for our modern Labs! Have you taken a good look at your Labrador’s paws? Do they have a Bolo mark? We would love to hear about your retrievers in the comments!