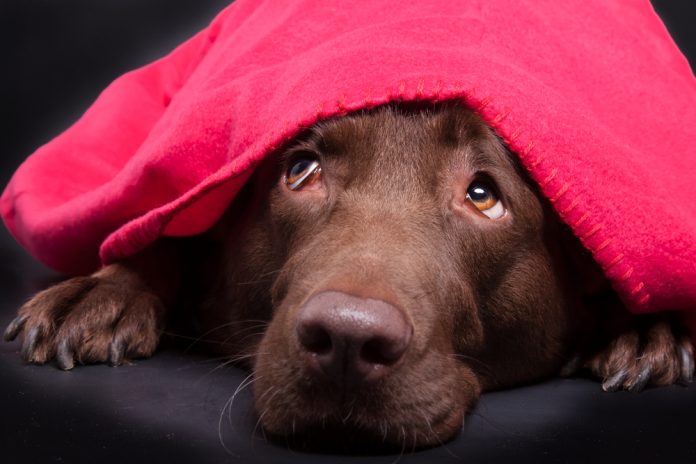 Sometimes Labradors need to be helped. They may need their nails clipping, they may need to have drops put in their ears, they might have to have a bandage changed, or a tooth examined, or a leg, or a lump. You know how it is. But sometimes, Labradors don’t want to be helped! People often write in to us and say “My Labrador won’t let me cut his nails” Or “My labrador won’t let me put ear drops in”  That kind of thing.

If you have recently had to pursue your four legged friend around the kitchen table with his eye ointment. Or worse still have had to engage him in an unseemly wrestling match in your vet’s surgery just so he can have his temperature taken! You may well be wondering if there is another way. “My dog won’t let me..”  is  a common problem, and how to resolve it is a common question.

Quite often, someone has made an attempt at cleaning their dog’s ears, or trimming his nails, only to have the dog wriggle from their grasp half way through, never to be caught again.

If your dog escaped from you last time you tried to restrain him, he’ll be even quicker off the mark this time. He’ll spot you trying to slip the clippers into your pocket and be off around the sofa, keeping a wary eye on your futile attempts to pin him down. Tougher souls, who’ve owned numerous dogs, may roll their eyes at your efforts. “Get a grip”  they will say (in this case a very firm grip) “Just grab him and get on with it” But is this really the answer?  Or is there a better way?

There are times when restraint is essential.  When urgent treatment is required, you may need to just get on with it, pin down your dog, and do whatever you have to do. If you absolutely have to physically restrain a dog, it is important that you get some help.  One person to hold the dog, the other to apply the treatment.

It is also much easier (and safer) to restrain a dog wearing a body harness and muzzle.  The harness makes the dog much less slippery, and gives you something to hang on to! The muzzle is optional, but remember that even the best tempered dog can be induced to bite if sufficiently frightened.  If you are not sure of your dog’s temperament, or don’t know how to apply the treatment in question, always talk to your vet first.

There is no doubt that some dogs find being restrained more than ‘just a bit’ upsetting. Increasingly vets are recognising that forced restraint can be very stressful for some dogs, and more are turning to sedation for procedures that were once commonly carried out using restraint. Low stress handling techniques are a great alternative to both forced restraint, and sedation.  And some of these techniques can be used by all of us at home

Essentially, low stress handling teaches the dog to willingly submit to the treatment he doesn’t like.   This system can be used to cut nails, handle and examine different parts of the body such as paws and ears.  And even to apply drops or ointment.

The system involves rewarding the dog for the process in incremental stages.  So instead of grabbing at a paw for example,  we first teach him to let us just touch the paw, over and over again. We do this with an event marker (usually a clicker, but if your hands are full you can use a word like ‘good’) and some really good rewards (chunks of roast chicken for example). Once he is comfortable and willingly allowing the procedure, in exchange for repeated rewards, we can begin to move the goalposts and work towards our final objective.

How long does it take?

You might think that this kind of behavioral modification would take ages.  But it is actually surprisingly quick. One that I have adopted is the clicker-trained nail trim.

One of my Labradors has very rapidly growing claws, and until a few years ago, she hated having them cut.  Between two of us we would have to restrain her whilst we did the job as quickly as we could. Rushing nail clipping is never a good idea as it is so easy to cut the ‘quick’ if you are in a hurry.  But I put off clicker training my dog to hold her paw out for nail clipping, probably thinking it would take up quite a lot of my time.

When I eventually got around to it, it actually took less than an hour split into three sessions of around twenty minutes.  And what a difference it made to my dog. You can watch a video by the late Sophia Yin demonstrating how this can work, even with a dog which is aggressively attempting to avoid a nail trim

Sophia Yin was a great proponent of low stress handling techniques and you can find lots more information on her website, both for pet owners and for veterinary professionals who want to learn how to reduce the time and stress involved in treating animals in their surgeries.

Obviously, you don’t want to wait until your dog needs urgent attention before attempting these gentle techniques. It needs a bit of planning. Think about an aspect of handling that your dog does not like.  It might be having his paws lifted up, or his ears cleaned. Arm yourself with some juicy treats and when you have twenty minutes to spare and no distractions around you, take the opportunity to do a bit of low stress handling training.

Put the treats in a dish where the dog can’t or won’t take them, but where you can reach them. Having the dog sitting in his bed is a great way to start, you can sit on the floor next to him. Let’s use his ears as an example.

Gently touch the corner of his ear.  If he doesn’t flinch or move away, immediately ‘mark’ the moment with a click or a word like ‘good’.  Then immediately give him a treat from your dish. If he moved away, try something less worrying for him.  Just move your hand to within a few inches of his ear.  When I started with my dog’s nails, if she could see the clippers,  I couldn’t even touch her paw for the first few minutes.

The idea is to find a baseline from which to progress. In this case you want to get to the point where you can lift your dog’s ear flap and swab the opening to his ear with some cotton wool.  But you need to break it down into stages. Once you have found your baseline, every four or five repetitions, try and move a tiny bit closer to your objective.

You’ll be surprised at how quickly you will progress once the dog realises that he is earning the yummy treats by allowing your gentle touch. And that no-one is going to grab or trap him. Stop on a high, when you have made a little progress, and try again in an hour or two, or the next day.

The great thing about this system is that it can’t fail. If you find the dog is avoiding your hands, go back to a point at which he was comfortable and move forwards again more slowly. Choose session times when you have no pressures on you, whilst you watch TV in the evening for example, then it won’t matter if you make slower progress in some sessions than in others. It should be low stress for you too!

Like so many things, prevention is often better than the cure. If you have a young puppy, this kind of ‘handling’ training on a regular basis, is worth its weight in gold. It’s also good for building a bond between the two of you.  Give it a go, and let us know how you get on.