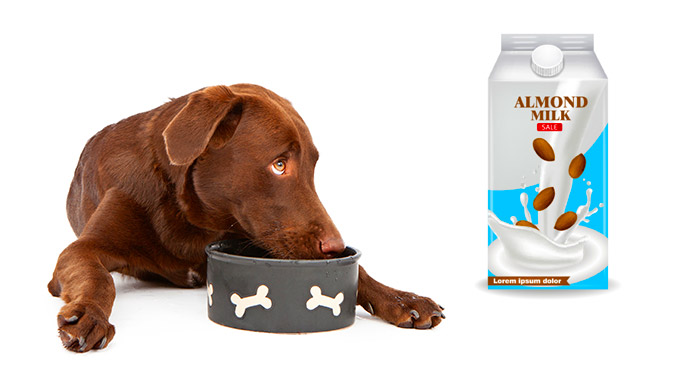 Can dogs drink almond milk? Plain, unsweetened almond milk is safe for dogs in small amounts. But, it is high in calories. And it doesn’t contain any nutrients your dog won’t already receive in their normal diet. Plus, some almong milk brands contain added dangerous ingredients like xylitol (an artificial sweetener), which is toxic to dogs.

As long as your dog has only consumed a small amount of plain, unsweetened almond milk, they should be fine. Let’s take a closer look at the question “can dogs drink almond milk”.

Almond milk is becoming a popular substitute to cows’ milk in many homes. It is lower in calories, and lactose free, so is a great alternative for many. But, this doesn’t automatically mean it’s perfect for our dogs. Dogs, like some humans, can struggle to digest the lactose in cows’ milk. So, alternatives like almond milk can seem like a great idea. But, in reality, if your dog is already getting a proper, balanced diet, they do not need almond milk.

A small amount of plain, unsweetened almond milk is fine for dogs to have. But, some dogs will not like the taste, and some may be intolerant to even this. Over time, too much almond milk alongside your dog’s regular food can also cause health issues. This includes obesity and nutritional imbalances.

Is Almond Milk Safe for Dogs?

Plain, unsweetened almond milk is safe for dogs to drink in small amounts. As long as they are not allergic to any of the ingredients. In most cases, almond milk is made from ground almonds and filtered water. But some manufacturers add thickeners and sweeteners to their products.

The main added ingredient that poses a danger to dogs is xylitol. This is an artificial sweetener often used in non-dairy milks and other foodstuffs, like peanut butter. Xylitol is not safe for dogs. It causes an increase in insulin production. This can lead to liver failure and hypoglycemia. Always check the ingredients of almond milk before offering it to your dog. If it contains xylitol, do not let your dog drink any. 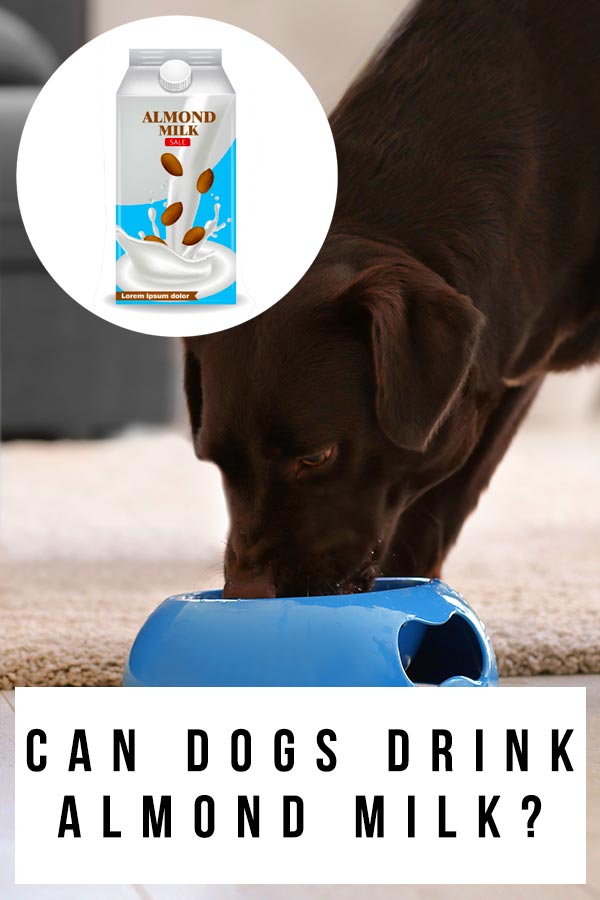 Is Almond Milk Good for Dogs?

So, the answer to “can dogs drink almond milk” is yes, as long as it is plain. But is it actually good for them? Almond milk is a great dairy alternative for humans. So what about almond milk for dogs?

Almonds themselves are not great for dogs because they are high in oils and fats. In some cases, high consumption can lead to vomiting, diarrhea, and even pancreatitis. In very small amounts, almond milk is safe for dogs. It is a lower fat and lower calorie alternative to cows’ milk. It’s free of saturated fat. Plus, many store-bought brands will supplement their drink with calcium, Vitamin A, and Vitamin D.

The main benefit of almond milk is that it does not contain lactose. So, dogs may find it easier to digest than cows’ milk. But, neither types of milk are really necessary in most dog diets.

Almond milk doesn’t contain any vital nutrients or ingredients that your dog won’t already get in their normal diet. In fact, if your dog loves the taste of almond milk, they may try to fill up on this treat and then leave their regular food. This might seem sweet or funny, but it can have negative consequences.

Letting your dog fill up on tasty treats like almond milk and then not eat their regular food can lead to nutritional imbalances. So, you should only ever offer plain, unsweetened almond milk as an occasional treat. And, to be on the safe side, you could also only offer it after your dog has eaten their normal food. Just make sure not to give too much on top of their food, as this can lead to weight gain.

Is Almond Milk Bad for Dogs?

So, given that, can dogs drink almond milk without any negative consequences? We already know that almond milk with xylitol can be toxic to dogs. But what about unsweetened almond milk? Can this ever be bad for dogs?

The main problem with almond milk is the fat and calorie content. Even though it is lower than cows’ milk per cup, it’s still quite high. If your dog has almond milk on a regular basis, they can easily start to put on excess weight. Obesity is becoming more of a problem for pet dogs. Studies have found a link between overweight and obese dogs and the number of treats a dog receives. Obesity can worsen health problems like hip dysplasia and arthritis in dogs. And, in severe cases it can contribute to a shortened lifespan. So, keep high calorie treats like almond milk for dogs to a minimum.

Unsweetened almond milk is the safest type of almond milk for your dog to drink. But, it should still only be given as an occasional treat. Treats should make up no more than 10% of your dog’s daily calorie allowance. If it is the first time giving your dog almond milk, try them with a very small amount. They may not like the taste. And they may still experience intolerances to this product.

One way that some manufacturers try to sweeten their almond milk is by adding vanilla. Vanilla extract and flavoring both have surprisingly high alcohol contents. And alcohol is toxic to dogs. So, you should not let your dog drink vanilla almond milk. A very small amount is unlikely to do any fatal damage, thanks to the very small quantity of vanilla flavoring used. But it can cause some problems and digestive discomfort. Your dog may experience vomiting, diarrhea, and more.

If you want to share almond milk with your dog, only offer them unsweetened and plain varieties.

If you are reading this knowing that your dog has had almond milk that has been sweetened with a toxic ingredient, it’s important to act quickly. Especially if they’ve had a lot.

Before anything else, call your veterinarian. If they aren’t available, call an emergency vet. Tell them exactly what toxic ingredients your dog has consumed. And the amount of sweetened almond milk they have had. In some cases, this amount may not be enough to actually cause any serious problems. So, they may recommend that you just watch your dog over the next few hours for further symptoms. But, in some instances, you may need to take your dog to an emergency veterinarian for immediate help.

It’s important to follow your vet’s instructions over anyone else’s. Remember, they will know best how to help your dog at this point.

Xylitol is the most common, dangerous sweetener that dogs will consume when they drink almond milk. Signs of toxicity from xylitol include:

If your dog shows any of these symptoms, tell your veterinarian.

Can dogs drink almog milk? Yes. But, not all dogs will like the taste of this occasional treat. Luckily, there are plenty of other treats that your dog will enjoy if they don’t like almond milk. Here are some alternatives:

In small amounts, plain and unsweetened almond milk is safe for dogs. But, make sure you avoid those with added ingredients like xylitol and vanilla extract. Offer your dog a small amount at first to see if they like the taste. Does your dog enjoy drinking almond milk? 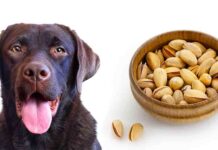 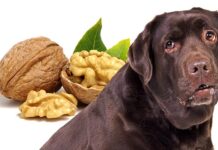 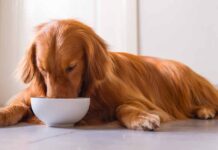 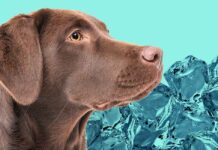 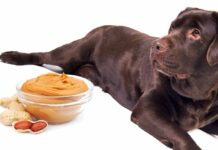