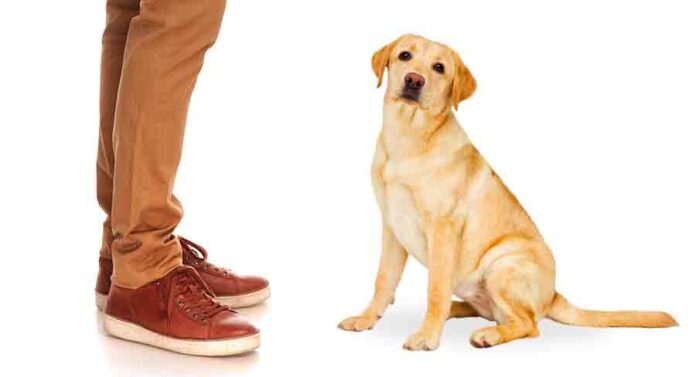 A dwarf Labrador has a genetic mutation which causes abnormally short leg bones. There are several distinct types of dwarfism which occur in Labradors. And other types which can be introduced by outcrossing with other dog breeds.

Dwarf Labradors appeal to some people because they seem cute, or give the impression of needing less exercise. However, some dwarf Labs actually need more complex care than regular Labs. Potential buyers should carefully consider whether they’re ready for that commitment.

There are several genetic causes of dwarfism in dogs. Some appear in Labradors with perfect pedigrees. Others only occur in Labrador mix dogs. Or Labrador lines which have been outcrossed with other breeds at some point in the past. Let’s take a look. 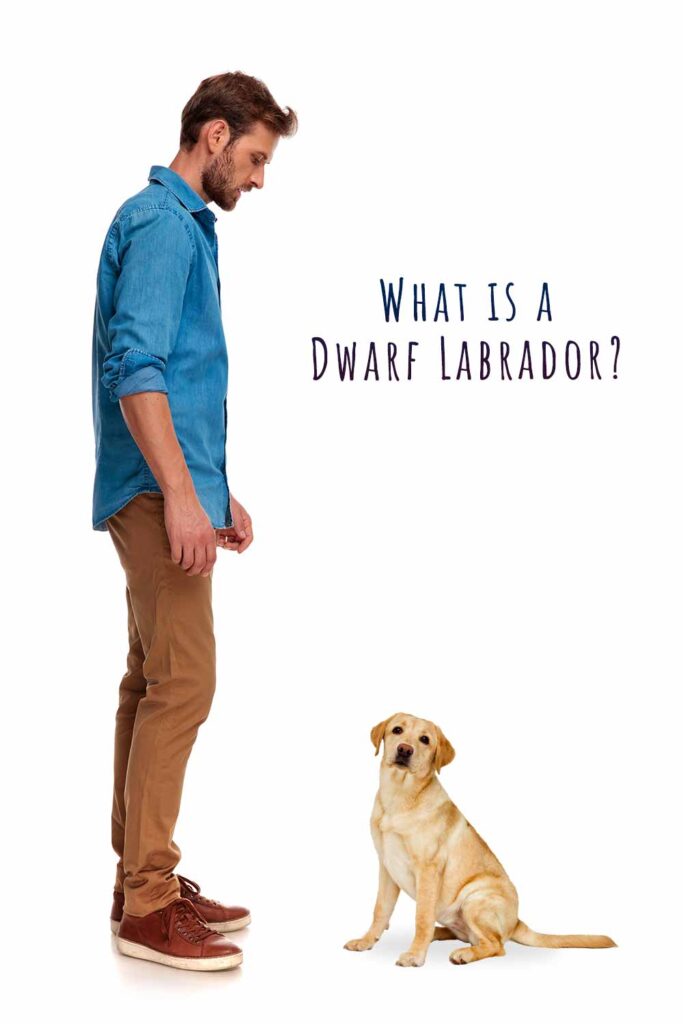 Chondrodysplasia and chondrodystrophy are the most widespread and widely researched forms of dwarfism in dogs. They are both caused by mutations in a gene known as the FGF4 gene. Basset Hounds, Dachshunds and Corgis all owe their iconic stature to one of these FGF4 mutations. Although, it’s not always apparent without genetic testing which of the two mutations they have. Sadly, chondrodystrophy is also linked to a significantly increased risk of intervertebral disc disease. IVDD is very painful and debilitating spinal condition.

Now let’s look at the forms of dwarfism which do occur in the purebred Labrador population.

Oculoskeletal dysplasia is a hereditary condition in the Labrador Retriever breed. It causes short legs and severe defects in the structure of the eye. It is caused by a recessive genetic mutation, which means that dogs can ‘carry’ it silently without being affected. But when two carriers mate, approximately one quarter of their puppies will be affected (and one half will also be silent carriers).

Affected dogs have short legs but otherwise normal proportions. They are at increased risk of osteoarthritis, hip dysplasia, and lameness. The changes to their eyes cause loss of vision, and may also make them vulnerable to developing problems like cataracts. Fortunately, there is a DNA test to identify Labradors carrying the faulty gene which causes oculoskeletal dysplasia, so that breeders can exclude them from their breeding program.

Skeletal dysplasia 2, or SD2, is an interesting form of Labrador dwarfism, occurring mostly in working line (or American-type) Labs. It is also caused by a recessive genetic mutation. Which means pups can only be affected if both their parents were affected, or carriers. But the impact of the condition varies a lot from dog to dog. In fact, some SD2 Labs from otherwise tall breeding lines are still taller than non-affected Labradors from naturally petite breeding lines!

When this happens, Labs with SD2 can be recognized because their legs are out of proportion to the rest of their body. There is also a DNA test to identify borderline cases. Happily, and probably because the effects of this mutation are so subtle, SD2 dwarfism doesn’t increase the risk of any other health problems.

Radius curvus deformity is a disease which affects the cartilage at each end of the radius bone in the leg, causing it to curve and stop growing prematurely. It’s the least well understood type of dwarfism in Labradors. Researchers haven’t found the gene responsible yet. However, it does increase the risk of painful arthritis, so affected dogs shouldn’t be used for further mating.

And now we’ve seen the different types of dwarf Lab dog, and how they arise, let’s take a look at what it’s like to own one!

The temperament of a dwarf Lab dog depends upon how they inherited their short stature. Dwarf Labs with one of the forms of dwarfism naturally occurring in Labradors will have a typical Labrador personality. They are likely to be:

On the other hand, Labradors which inherited dwarfism due to outcrossing with other breeds earlier in their family tree might also have traits of those breeds. There can even be big differences in personality between siblings from the same crossbreed litter.

A lot of interest in dwarf Lab dogs is fuelled by the idea that they need less exercise. A fully grown traditional height Labrador needs at least two hours of exercise a day. They were originally bred as working dogs, and many still are. So they have lots of physical stamina and energy to burn.

Most Labradors with SD2 dwarfism will need comparable amounts of exercise. But Labs with more extreme limb deformities may find it harder to keep up over long distances or at high speeds. However, they still have lively minds, and a strong work ethic. So rather than simply needing less exercise, their owners have a responsibility to find different types of physical and mental stimulation. To bridge the gap between their instincts, and their abilities. For example scent work, or advanced obedience training.

Labradors are medium-large dogs with a typical lifespan of 12-13 years. All Labs, including dwarf Labs, are vulnerable to:

Litters of Labrador puppies should only be bred from parents who have been screened for these conditions and found clear of them. Labs with a family history of chrondrodysplasia, chondrodystropthy, or oculoskeletal dysplasas should also be tested to make sure they won’t pass it on to their puppies.

Additional risks of being a dwarf Lab

The additional health risks of dwarfism in Labradors are highly variable. Labrador mix dogs with dwarfism will also be susceptible to the health conditions which affect their ‘other’ parent or ancestor. For example a dwarf Lab created by crossbreeding with a Dachshund may also go on to develop intervertebral disc disease. And most of the genetic causes of dwarfism occurring in pedigree Labradors are associated with an increase in health problems relating to their joints or eyesight. These can require lifelong medical attention.

Only Labs with SD2 dwarfism don’t have additional health problems.

Labradors are famous for being versatile and adaptable. They succeed as working dogs, service dogs, companion dogs and therapy dogs. In short, they are great pets for a lot of people. Labradors with SD2 dwarfism are too. You can find out more about whether they’re the right fit for our household in this article.

Labs with complex needs arising from their dwarf stature are best suited to experienced dog owners who have the financial means to meet their medical costs. They are not as simple as a regular Lab in a smaller package.

Have you been surprised to discover how many types of dwarfism there are in Labradors? Dwarf Labradors exist on a wide spectrum. From SD2 dwarf Labradors who are almost indistinct from normal Labs, to dwarf Labs whose well being is severely compromised by additional medical complications. Before adopting a dwarf Lab, have a candid chat with the breeder or shelter about their special care needs, and how you will be able to meet them.

Dwarfism isn’t the only way some breeders produce smaller than usual Labradors for sale. You can read more about miniature Labradors and their pros and cons in this article.

Hoelen. Evaluation of different candidate genes as a cause of chondrodysplasia in Labrador Retrievers and Bouviers des Flandres. Doctoral thesis at Utrecht University. 2009.

Smit et al. Evaluation of candidate genes as a cause of chondrodysplasia in Labrador retrievers. The Veterinary Journal. 2011.