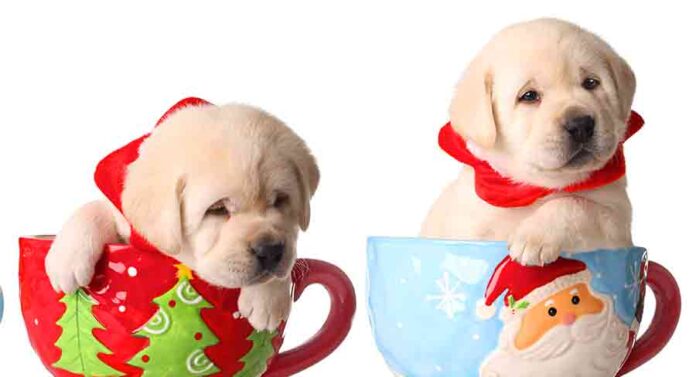 A teacup Lab is one that is bred to be extremely small. Some breeders will breed runts together over several generations to achieve this tiny size, but others may introduce dwarfism genes or mix a Lab with a toy breed.

Many people believe a teacup Labrador will be better for small homes, with the same lovable temperament. But, in reality, teacup Labs are often plagued with a number of serious health issues, and may not even have those desired Labrador traits depending on how they are bred.

The Labrador Retriever has been America’s favorite family dog for almost 30 years now. So, it’s natural that people are longing for Labs, even when they don’t have the space for one. For many people, the teacup Lab seems like a perfect solution. The lovable Lab package in a tiny, puppy-sized body for life. But, the reality of the teacup Labrador is quite different to this ideal.

What is a Teacup Lab?

Teacup dogs are bred to have an extremely small size. They are often considered the smallest possible size for dogs, smaller than toy or miniature breeds. The name is inspired by their size – dogs small enough to fit in a teacup, even when fully grown. A teacup Lab is simply one bred, in some way, to have this extreme, tiny size.

Many breed registries, including the AKC, refuse to endorse or accept any ‘teacup’ breeds. This is because, despite their cute appearance, these tiny dogs are actually quite unhealthy. With that extreme size comes a huge number of problems that can shorten their lifespan and significantly reduce their quality of life.

How are Teacup Labs Bred?

Teacup Labs will often be bred in the same ways as miniature Labs, but with the aim of creating an even smaller dog. The three main methods used are:

The appearance, temperament, and health of a teacup Lab will vary depending on the method used. 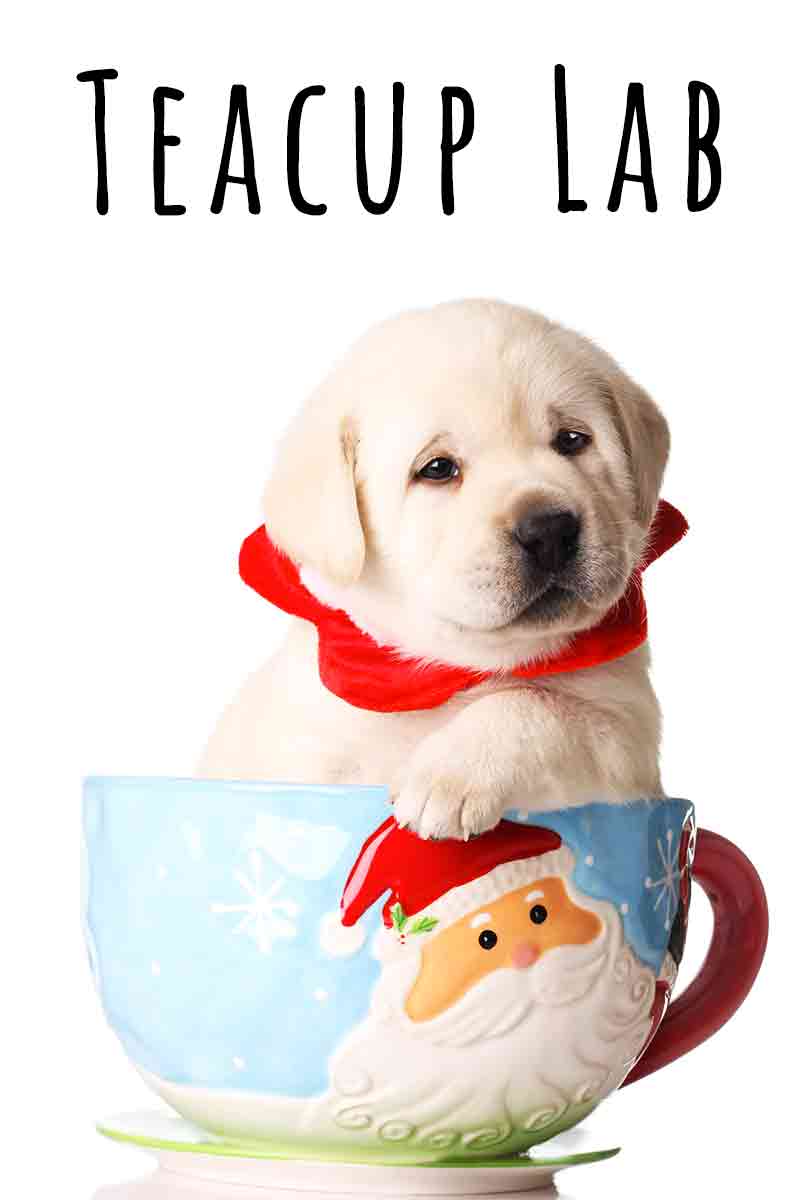 As the smallest, and often weakest, dog in the litter, runts can be prone to health issues. Sometimes puppies become the runt of the litter because they already have a congenital disease which comprises their physical size, strength and wellbeing. Breeding them together to create a new generation of small dogs will pass those hereditary diseases on.

Mixing Labs with a Toy Breed

When you mix two dog breeds together, puppies could inherit any blend of their qualities, including temperament, appearance, and health. There is absolutely no way of knowing exactly what your puppy will be like until they arrive. For instance, a breeder may mix a Lab with a Chihuahua to try and get teacup sized puppies. But, their puppies may look more like Chihuahuas, and have a Chihuahua-like temperament. So, although you will most likely get a dog that is much smaller than a purebred Lab, there’s no guarantee they’ll have the other qualities you’re after.

The final common method used is to introduce dwarfism. This involves introducing a gene that stunts puppies’ growth. Dwarfism in dogs has been associated with health problems such as skin and coat abnormalities, including alopecia. Sadly, many dogs with dwarfism suffer from shortened lifespans.

A Mix of Methods

To achieve the tiny size required of teacup dogs, breeders may choose to use more than one of these methods over generations to get the smallest Labs possible. Of course, this does not come without risks to the puppies, who can suffer from serious health problems.

If you’re speaking to a teacup Labrador breeder, you should always find out exactly what methods they are using to create such tiny puppies, as it can significantly impact the temperament, appearance, and health of your dog.

How Big is a Teacup Lab?

The smallest breed category recognized by the AKC is ‘toy’. But, toy breeds are still much larger than teacup dogs. It is generally accepted that teacup dogs weigh fewer than 5 pounds as adults, and reach no more than 17 inches tall. Of course, the exact size of a teacup Lab would vary depending on the method used to breed one. But, in general, breeders attempt to create a Lab that is the same size as a puppy throughout its entire life.

The exact appearance of a teacup Lab will depend entirely on the method used to breed them. Breeding runts over generations is the method most likely to give you a teacup Lab that looks like a Lab. But, of course, this relies on your dog avoiding any potential heritable health issues. And, it is a long-winded process. Even two small Labs bred together could birth puppies that grow into larger Labs. So, breeders would likely have to stick with this tactic for years before you get a puppy anywhere near as small as you’re hoping.

As we said earlier, a mixed breed dog could inherit traits from either parent. So, it’s more likely to be a blend of a Lab and the other dog breed used. And, Labs with dwarfism will often be small, but disproportionately. Their heads and paws may be larger than normal, with very short legs.

Just like standard Labs, it’s very likely that teacup Labs will shed moderately all year and heavily during shedding season. They are smaller, so yes there is less fur to deal with. But you cannot escape Lab shedding by choosing a teacup Labrador. Controlling shedding can actually be harder with a teacup Lab, as normal grooming tools may be too large to use easily on your tiny dog. And, remember, coat can be influenced by the breeding method used.

Teacup Labs that are the result of mixed breeding could have a non-Lab type coat. And those bred to have dwarfism may suffer from coat-related health issues like alopecia.

Teacup Labs are not accepted by any official breed registries, so they cannot be shown as purebred dogs in shows. Their status as a purebred dog will depend on the method used to breed them. Obviously, mixing a Lab with a smaller breed will not create a purebred Lab puppy. But, breeding together runts over generations can give you smaller purebred puppies. However, the purebred Labs that result are likely to be less healthy than Labs who are bred with their overall health in mind, rather than just a certain appearance.

The main difference between teacup and miniature Labradors is their size. Teacup Labs are meant to be even smaller than miniature Labs, which are already smaller than the standard. Miniature Labs are often bred using the same methods that we’ve looked at above. So, they will be at risk of issues just as much as teacup Labs. Let’s take a closer look at those health issues.

Even standard Labrador Retrievers are prone to a number of health risks. These heritable disorders don’t go away when you try to breed Labs to have a smaller size. Labs of all sizes are prone to:

Breeding them for a smaller, extreme size can add a number of issues to this list. Mixed breed dogs can be prone to the health issues of either parent, particularly if they are not bred with health in mind. And, Labs with dwarfism can commonly experience skin and coat issues.

There are a number of health issues that are directly related to a dog’s size. Miniature, toy, and teacup breeds are more prone to:

On top of all of these issues, teacup dogs often struggle to regulate their body temperatures like larger dogs can. So, they can easily become too cold, leading to issues like hypothermia. This can also cause problems during anesthesia.

Teacup Labradors are prone to a huge number of health problems. Standard sized Labradors are a much healthier option and can save you and your dog a lot of stress and costly veterinary bills.

Pros and Cons of Teacup Labs

Let’s quickly recap the pros and cons of teacup Labradors, if you are still on the fence about whether one of these tiny dogs would be right for your home. Many people like the idea of teacup dogs because they believe they will require less space, less daily care in terms of grooming and exercise, and will be cheaper. After all, they won’t need as much food as larger Labs. However, the cons of breeding Labs for this tiny, extreme size massively outweighs these perceived benefits.

Ultimately, there are much better options out there if you are looking for a small dog breed.

Not all Labradors are massive. In fact, some Labs will grow up quite petite. They don’t necessarily have anything wrong with them. There is just natural size variation in every dog breed. Female Labs are usually smaller than males. So, if you love Labs, but want to avoid a 90 pound Lab, choose a female puppy from two smaller Lab parents.

Alternatively, there are plenty of very small dog breeds out there, that avoid the extreme problems associated with teacup breeds. For instance:

Do plenty of research before bringing any new dog home to ensure they suit your family. Choose puppies from reputable breeders that prioritise health over appearance.

The number of people searching for teacup Labs is rising, but sadly the perceived benefits of these tiny dogs are not what they initially seem. It’s best to choose a different small dog breed if you’re concerned about the large size of a standard Labrador. Overall, it’s best to always prioritise the health of a dog over a desired appearance trait. Owners of teacup breeds often spend a lot of time with the vet, and their dogs often, sadly, suffer from very short lifespans.