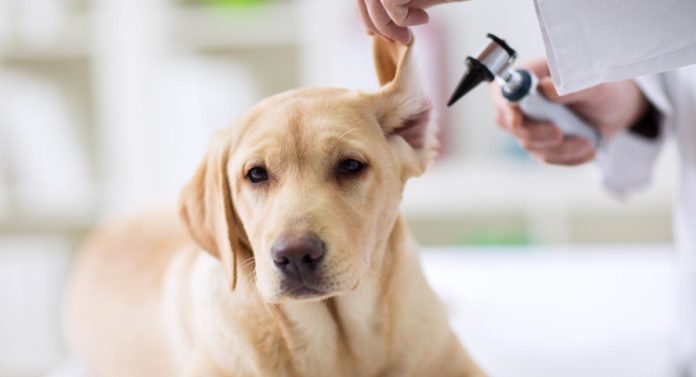 Welcome to your complete guide to hearing aids for dogs! If you’re reading this article, then chances are that your beloved senior dog has begun to lose his hearing. Or perhaps, you got a new puppy who may be showing signs of deafness. Many owners of dogs with partial or total hearing loss wonder, “Can dogs get hearing aids?” and whether or not there is anything else they can do to help their four-legged companions.

What causes hearing loss or deafness in dogs?

Canine hearing loss or deafness can be congenital (present at birth), a result of infection or trauma to the ear, or it may be gradual as a dog ages. Congenital deafness is more prevalent in certain dog breeds. According to renowned canine deafness researcher Dr. George Strain, there are over 100 dog breeds with incidents of hereditary deafness. The most commonly affected breeds are the Dalmatian, Bull Terrier, Australian Heeler, Catahoula, English Cocker Spaniel, Parson Russell Terrier, and Boston Terrier.

Additionally, some dogs with a certain color seem to be predisposed to deafness.

According to Strain’s 2015 The Genetics of Deafness in Domestic Animals study, “the recessive alleles of the piebald locus and the dominant allele of the merle locus are associated with congenital hereditary deafness in dogs.” Simply put, dogs with the piebald gene (a lot of white fur and lack of skin pigmentation) or the merle gene (the ‘dappled’ coat color that is often observed in breeds such as Australian Shepherds and Great Danes) are more likely to be born deaf in one or both ears.

However, any dog, regardless of their breeding or age, can permanently lose their hearing due to an untreated ear infection, constant exposure to loud noises over time, or trauma to the bone surrounding the inner ear. Permanent hearing loss has also been reported in some dogs after they’ve undergone anesthesia for surgical treatment. And, similarly to people, dogs can simply lose their hearing function as they grow older.

How can I tell if my dog is going deaf?

If a puppy is born completely deaf, then you may be able to tell by the pup’s lack of individual response to noise in his environment- such as your voice and other sounds around the house- which continues after 10 days of age. Additionally, deaf puppies often tend to stick with and mimic their litter mates’ behaviors, as opposed to discovering new things on their own.

If a puppy is born with unilateral deafness (one deaf ear and one functional ear), or if your adult dog is losing their hearing, then it may not be so obvious in the early stages. Initially, you may just notice the dog having a hard time figuring out where a sound came from. This often is apparent to the dog’s owners. As the hearing loss progresses, the dog may be slow to respond or not respond at all to noise that they normally would, such as your calling their name, giving them a verbal cue, or perhaps the sound of their food bowl being filled.

They may also be easily startled or become aggressive to animals and even their owners because of their inability to hear someone or something approaching. Their bark may also sound much different from before.

The aforementioned signs of deafness aren’t the only tools to determine whether or not your dog is suffering from hearing loss. In fact, there are three different diagnostic tests which can detect hearing loss in dogs in varying degrees:

According to a 2009 study, the BAER is an electrodiagnostic test which measures electrical impulses (waves) in the dog’s brain after various sounds are made to determine the dog’s cognitive response (or lack thereof) to the stimuli. The sounds are delivered via headphones applied over the dog’s ears, and the brain wave measurements are taken via three electrodes applied to the dog’s head.

According to a 2011 study, the TEOAE is a test which measures otoacoustic emissions from the outer hair cells of the cochlea, the part of the inner ear which receives vibrations that we interpret as various sounds. To measure these emissions, a microphone-equipped probe is placed in the dog’s outer ear, and “broadband click stimuli activate the cochlea simultaneously over a wide frequency region and result in recordable emissions.”

According to a 2018 study, the DPOAE is a test which also measures otoacoustic emissions from the outer hair cells of the cochlea via a microphone-equipped probe in the ear canal, but with two different stimuli, often designated as L1 and L2.

Test frequencies (usually referred to as f1 and f2) are produced at a specific time while the L1 and L2 frequencies are played to create an interaction of the stimuli and the test frequencies. The resulting distortion is captured and measured by the probe.

Do they make hearing aids for dogs?

In 1987, researchers at Auburn University and Texas A&M developed a doggie hearing aid by placing a human hearing aid in a container which attached to the dog’s collar, with a plastic pipe extending from the container attaching to an expandable foam rubber plug placed inside the dog’s ear. While smaller dog breeds readily accepted the hearing aid, it was not as successful in larger breeds.

About 20 years later, Dr. Pete Scheifele started the University of Cincinnati’s Facility for Education and Testing of Canine Hearing and Laboratory for Animal Bioacoustics, commonly referred to as FETCHLAB. His team was able to develop hearing aids for dogs by taking molds of his hard-of-hearing dog Otter’s ears and creating custom hearing aids, which Otter wore via tubes connecting from the hearing aids to a cowl around his neck.

Since their initial attempt at hearing aids for dogs, FETCHLAB has progressed to making molds of a dog’s ears to create hearing aids which rest inside the dog’s ear canal. A specialized collar with wireless microphone transmission capabilities replaced the cowl.

As of 2013, FETCHLAB had outfitted four dogs with hearing aids like the one mentioned above, with a lot of other mixed results. The primary issues with the failed attempts were dogs not tolerating the hearing aids and/or lack of proper and consistent training of both owner and pet post-placement.

Cochlear implant hearing aids for dogs (nerve-stimulating electrodes which are directly implanted on the cochlea) have also been tested on deaf Dalmatians, since the implants have been successful in humans. However, the high cost of surgical implantation ($20,000 to $25,000) deterred these hearing aids from being pushed to mass production. As you can see, research to develop both functional and affordable hearing aids for dogs continues today.

How much do hearing aids for dogs cost?

Because of the complexity involved with creating hearing aids and variable success rates in dogs, not to mention the high initial cost of human hearing aids in general, hearing aids for dogs come with a pretty high price tag. If you’re looking into hearing aids as a possible option for a deaf or hearing-impaired dog, then it may cost a few thousand dollars to have them made. Additionally, more money may be needed to hire a dog trainer to ensure the success of the hearing aids.

How do I get a hearing aid for my dog?

As we’ve previously mentioned, hearing aids for deaf dogs are not widely available because they require custom molding to conform to your dog’s ears. Therefore, they can only be made and inserted by a veterinarian.

However, not all veterinarians offer hearing aids for dogs, so you may have to do some research before you’ll be able to find a vet who can and/or will make them for your dog. Your veterinarian may also determine that hearing aids will not help your pet.

Hearing aids for dogs – a summary

When it comes to hearing aids for dogs, they are definitely a work in progress. Dogs who are losing their hearing or who were born deaf may benefit from hearing aids, but it comes down to how much, if any, hearing function your dog has, whether or not the dog will tolerate hearing aids, and the owner’s willingness to spend a lot of money on a potentially poor outcome.

Hearing aids for dogs may also be hard to come by, as there is no one-size-fits-all commercially produced option, and not all veterinary practices offer doggie hearing aids. And for hearing aids to be successful, the owner must be willing to spend the appropriate amount of time training the dog to use their hearing aids, which should involve professional help for best results.